(Editor’s note: Jennifer Weinert is a graduate student of Carey Williams at Rutgers University. A Wisconsin native, she graduated from UW-River Falls with an animal science degree and worked for a reining trainer before going back to River Falls to manage its 70-plus head herd of university teaching horses. She started her doctorate studies at Rutgers in 2016 and plans to graduate next summer.)

Over the past two months, we shared results of an integrated rotational grazing study at Rutgers University, in which an improved forage variety of warm-season annual crabgrass (“Quick-N-Big”) was incorporated into a traditional cool-season rotational grazing system.
This approach increased pasture forage production during the critical “summer slump” months while providing adequate nutrition to maintain body condition in healthy adult grazing horses.
However, these studies were conducted in grazing systems in which the “Quick-N-Big” crabgrass sections were established in monoculture. 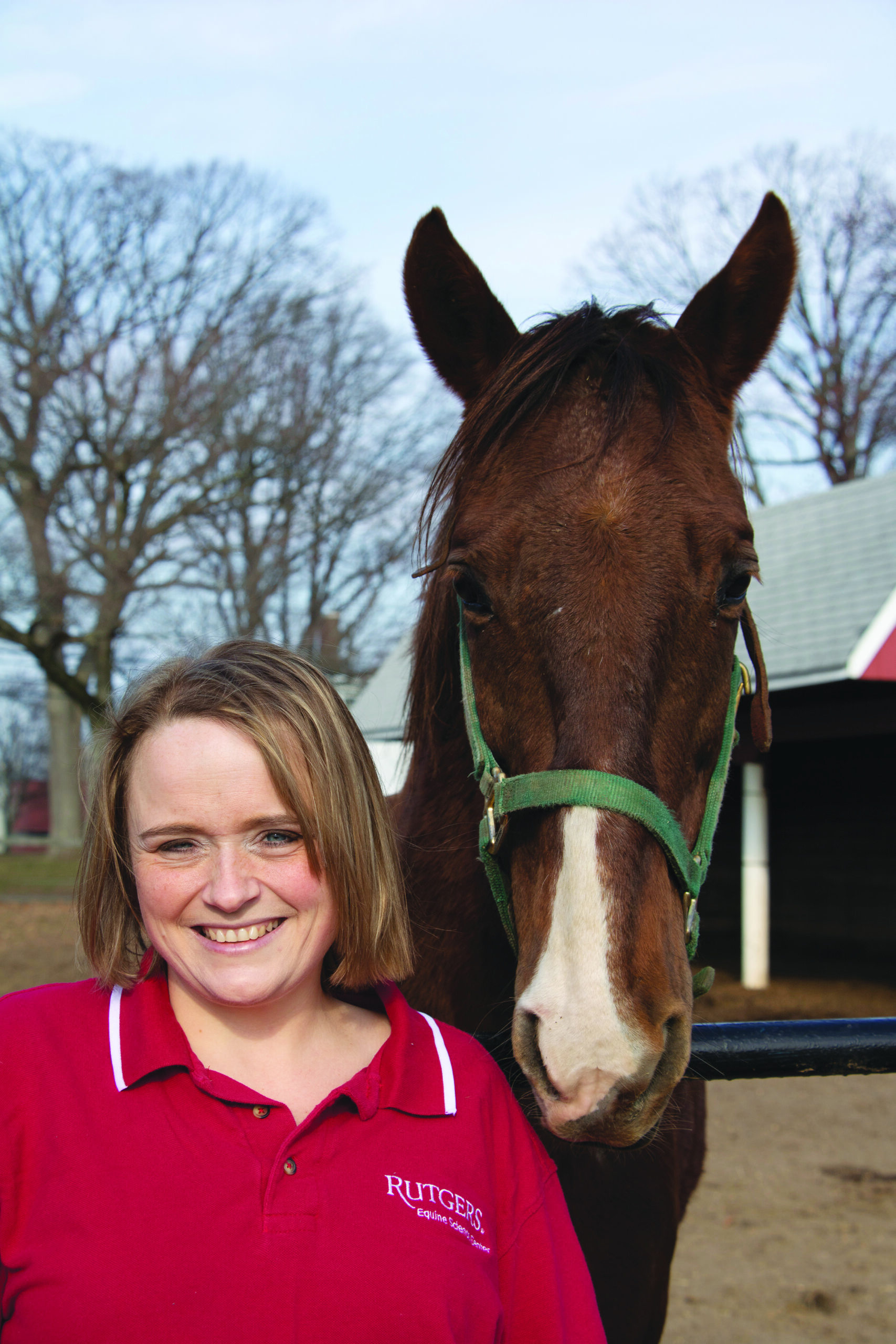 Two weeks prior to planting, glyphosate was applied to kill existing vegetation.
Seed was then planted into the residual stubble using a no-till drill.
An alternative to this monoculture establishment method is interseeding.
Interseeding offers the potential advantages of allowing horses to first graze cool-season grasses in the spring and early summer and potentially again in the fall within the same pasture section that is planted with the warm-season grass for increased “summer slump” forage availability, as well as negating the need for glyphosate application.
Thus, as a companion to the integrated rotational grazing study that maintained horses on full-pasture rotational grazing systems, researchers at Rutgers also investigated the impact of establishment method (monoculture vs. interseeded) on pasture forage production and nutritional composition through a small-plot study.
Two identical main plots were established each with multiple replicates of three treatments: Cool-season grass, monoculture crabgrass, and crabgrass interseeded into the cool-season grass.
Three healthy adult Standardbred mares grazed each main plot with all the treatments for eight hours over two consecutive days.
Grazing was repeated three times across the grazing season – late July, late August, and early October.
In the small plot study, the prevalence of crabgrass was as follows: Monoculture (63.3 percent); interseeded (33.3 percent); and cool-season grass (12.5 percent).
Establishment in the monoculture plots did not match levels seen in the full pasture sections (greater than or equal to 85 percent), which was attributable to emergence of weeds (primarily foxtail) and instances of dead forage and bare ground in the later grazing events.
Crude protein, starch, and non-fiber carbohydrates differed by treatment.
Crude protein was greatest in cool-season plots and lowest in the monoculture crabgrass plots. For the small plots, no differences were found for sugar fractions; ethanol soluble, water soluble, or non-structural carbohydrate content. Starch and NFC were both greatest in monoculture plots; starch was lowest in the cool-season plots.
This may be explained by the greater maturity level observed in the monoculture establishment compared to interseeded or cool-season plots. Weed infiltration, as noted above, may have also contributed to these higher starch and NFC values.
Establishment method also impacted “summer slump” forage production, with monoculture establishment of Quick-N-Big crabgrass resulting in greater herbage mass and sward height when compared to interseeding into existing cool-season grasses or cool-season grass alone. These differences were primarily attributable to the first grazing event in late July.
The yield of the monoculture plots subsequently decreased by the second grazing event and did not differ from other treatments at the time of the second or third grazing.
These results suggest that the full productive potential of the warm-season crabgrass during the “summer slump” can only be attained when utilizing a monoculture establishment.
Therefore, the integrated approach utilized in the full pastures system may have merit over interseeding crabgrass into an existing cool-season stand, as the yield in the interseeded plots did not exceed that of the plots containing only cool-season grass.
However, when comparing establishment methods, it is important to note that plot measurements were only collected over the “summer slump” period when crabgrass was available for grazing.
Over a full grazing season, an interseeded stand would offer the advantage of forage availability in the spring/early summer and later in the fall, whereas under monoculture establishment, such areas would be non-productive during these times.
Furthermore, this study only evaluated one year of growth under grazing pressure. The interseeded plots had the greatest prevalence of planted grasses, indicating that this approach may promote stand persistence.
A multi-year season-long evaluation of monoculture vs. interseeded establishment in a full-pasture setting would provide greater insight regarding the effect of establishment method on pasture production.
Next month, join us as we discuss the impact of forage type (warm-season vs. cool-season) on horse grazing behavior and forage preference.