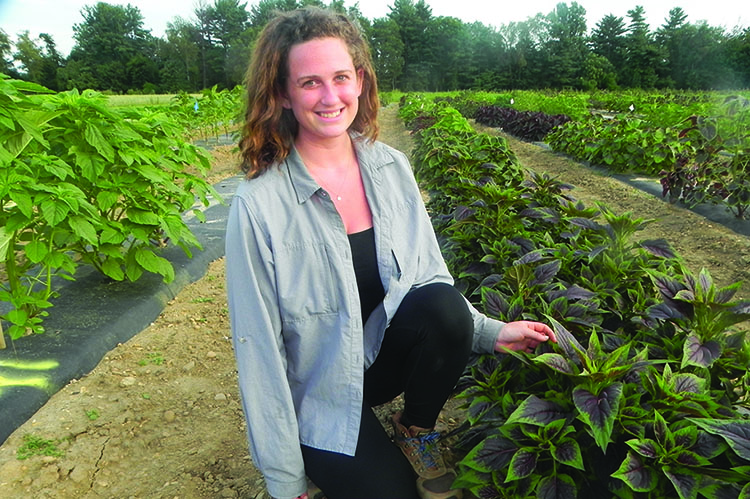 Doctoral candidate Tori Rosen is part of a team growing about 100 varieties of amaranth on a half-acre plot at the Rutgers’ Horticulture Farm No. 3. (Photo by Richard Skelly)

EAST BRUNSWICK — After being closed for the 2020 growing season for irrigation improvements and other needed technical renovations, Rutgers’ Horticulture Farm No. 3 off Ryders’ Lane here is once again bustling with a plethora of ag-related research experiments. Among the projects is a variety trial of amaranth being conducted by doctoral candidate Tori Rosen, a native of North Carolina.
Rosen is working with Dr. Jim Simon, a plant biologist at Rutgers University’s School of Biological and Environmental Sciences, who has amassed a wide-ranging research program, including basil, catnip and amaranth, which is also called summer spinach. Because conventional spinach typically does not grow well during the Garden State’s hot and humid summers, Simon, Rosen, ethnic crops expert Dr. Albert Ayeni and others involved in the amaranth project hold out high hopes for the crop.
The team is growing about 100 varieties of amaranth on a half-acre plot at the university farm that is protected by 8-foot tall deer fencing.
“I chose to work on amaranth or summer spinach because it is eaten around the world in South Asia, East Asia, Sub-Saharan Africa,” Rosen said as she was checking on the rows of different varieties.
Summer spinach originated in Mexico and is eaten a lot in the Caribbean.
“It’s eaten many different ways with many different preferences for aesthetics and taste, but all of the plants are really high in nutritional value, specifically iron and potassium,” Rosen said.
It is often a component in Jamaican stew recipes, and in China they call it hinh choi or yin choy.
“It’s in the same family as pigweeds, which causes a lot of farmers to hesitate in wanting to grow it,” she added.
Rosen said the taste can vary between varieties.
“Some are more mustardy, most are quite spinach-like in flavor, but that’s when eaten raw,” she said. “Typically, they are cooked in other cultures.”
Rosen’s large field experiment is in its initial stages, with plans to form a breeding project around the most flavorful blends, similar to how the Rutgers 250 tomato and new Rutgers strawberry lines were developed.
“The big draw to this right now is that it grows well throughout the summer and we know here in New Jersey, a lot of greens are grown in spring,” Rosen said, adding her parents cultivated her interest in ethnic foods and specialty crops.
“My parents have done a lot of travelling and they taught me to be a more adventurous eater,” Rosen said. While the amaranth project is in the very early stages and will take several years, the goal is to create a breed of summer spinach that does well in the Mid-Atlantic climate and has an appealing taste.
Simon, Rosen, Ayeni and others involved in specialty crop research held an open house at the farm and invited interested farmers from throughout the Garden State to come check out the rows of amaranth.
“We are growing about half an acre of amaranth as leafy greens, varieties from around the world including all the commercially available lines we could find as well as our own Rutgers selections and genetic materials from many other countries,” Simon said. “Our goal is to identify those promising, high-yielding nutrient-rich amaranths that have a field performance growers appreciate and see, and the visual appearance and taste that consumers and markets will embrace.”