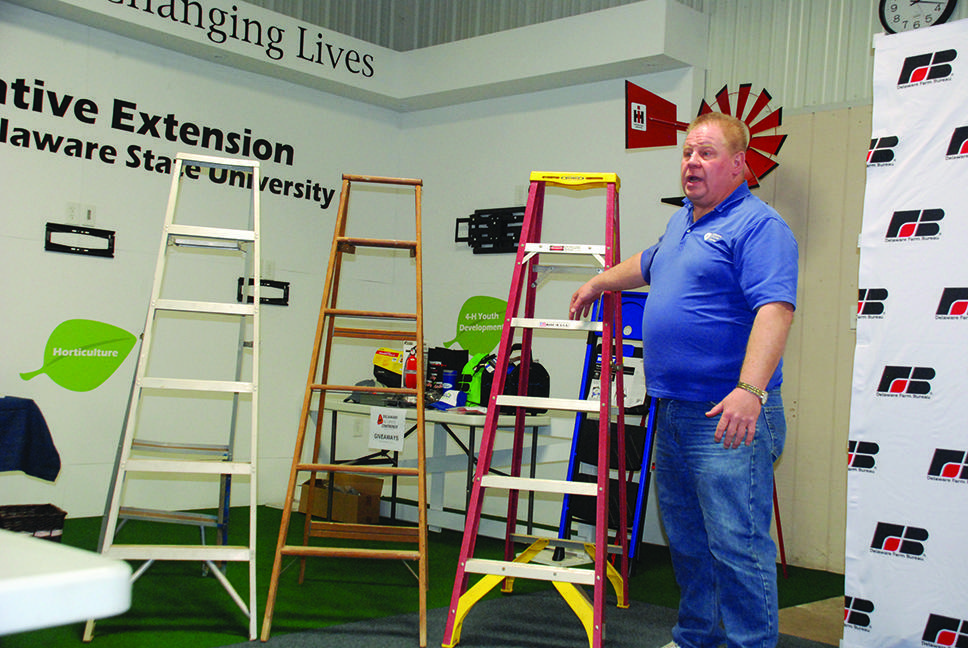 Matheu Carter, engineer with the Delaware T²/LTAP Center for Transportation,  described himself as “a fool that nearly got killed by a ladder,” making him specifically qualified to share ladder safety tips at the Delaware Farm Bureau’s Ag Safety Conference. (Photo by Carol Kinsley)

HARRINGTON, Del. — Matheu Carter claimed not to be an expert on ladders, but he has first-hand experience to learn from.
An “engineering circuit rider” with the Delaware T²/LTAP Center for Transportation, a partnership that works with departments of transportation at the local level, Carter shared his experience at the Delaware Farm Bureau’s Ag Safety Conference on March 30.
“I am a fool that nearly got killed by a ladder in October 2015,” he said.
His was a “beautiful” extension ladder, properly rated for his weight, in new condition. The damaged tree limb on family property was the culprit, Carter said.
“The ladder was just an unindicted coconspirator that ended up taking the rap,” he said. His fall of about 15 feet “probably should have killed me,” he said.
“We all make stupid compromises,” he said. “The message is, ‘Don’t.’ But we will.”
Carter ran through a litany of precautions to avoid a situation similar to his seven years ago.
Don’t stand on the top cap of a ladder. It is not a step. In fact, the top three rungs are not for climbing but for hands, for stabilization,
There are five duty ratings for ladders, based on weight — of you and anything with you, including clothing and tools.
Read the labels. Inspect the ladder. Evaluate the weather. If you are fatigued, dizzy or have balance problems, avoid ladders.
Choose the right length. Ladders can be too long or too short. Angle the ladder so the base is one-quarter of the working length from the object it is supported on. There’s an app for that — determining the proper angle — which you can access via www.cdc.gov/niosh/topics/falls.
There are also accessories for using ladders on stairways. Don’t improvise!
Make sure the ladder is on sound, stable, slip-resistant footing. Check the bottom of the ladder for caked mud.
Make sure no person or thing will knock the ladder out from under you. Watch out for power lines, stinging insects, birds and varmints that might startle you.
A ladder may not be the best tool. Alternatives include scaffolds, a scissor lift and boom or bucket lift.
Know your ladder’s history — where it’s been and how it has been used.
If it needs repair, it needs to be trashed, he said.
“Why have a faulty ladder? Why have that risk in your life?” Carter asked rhetorically.