Saving suburban farms, and their value 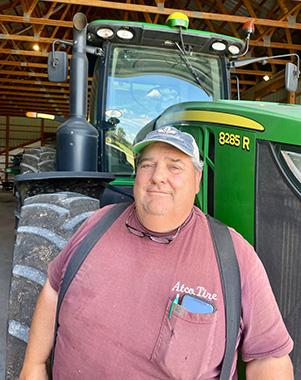 Randy Stabler grabbed a calculator inside an office on Pleasant Valley Farm recently and ran a few quick numbers. For every acre of corn he grows, he borrows about $250, roughly 40% of the total cost. Like most farmers, Stabler has a close relationship with his banker.

The terms of a loan are determined, in part, by the value of a farmer’s assets. It’s a source of concern for Stabler who operates inside Montgomery County’s massive agricultural reserve where he and other farmers said the value of some of those assets — county-issued development rights, specifically — has fallen dramatically.

“My banker looks at me differently,” Stabler said. “He knows that I’ve still got those [development rights] in my hand to market, but when I put a value on them today, it’s zero. … There’s no market for them.”

It’s a problem the county is studying as it searches for a solution. In 1980, when the county established its 93,000-acre agricultural reserve and dramatically reduced the number of homes that could be built inside it, farmers and other landowners were compensated with the creation of a transferable development rights program.

Farmers could sell the rights to homes they could no longer build to developers who could then use those rights in other designated areas where the county was encouraging growth. When the reserve was created, zoning limits changed from one home per 5 acres to one home per 25 acres, and farmers were issued one salable right — or TDR — for every home they could no longer develop.

Since the program’s inception, developers have purchased about $117 million of those rights for projects across more than 9,000 acres outside the reserve, according to the Maryland-National Capital Park and Planning Commission, an independent agency that oversees planning in Montgomery and Prince George’s counties. It also manages the development rights program, which has saved more than 52,000 acres of farmland within the reserve.

“I think the TDR program has been really successful,” said Patrick Butler, chief of the upcounty planning division at the Montgomery County Planning Department, which is part of the commission. 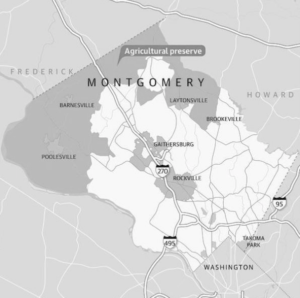 Montgomery County’s 93,000-acre agricultural reserve stretches across the county’s northwestern border from Poolesville to Brookeville. It was created in the early 1980s to limit development on key agricultural soils. The county also created a transferable development rights program to indemnify landowners and farmers in the reserve whose land became less valuable after the county limited development. Graphic courtesy Montgomery County

But farmers and county officials said the market for those rights has weakened in recent years due to a series of issues, including a lack of receiving areas for developers to use TDRs, competing incentive programs and even the dumping of underpriced TDRs onto the market. It’s critical, Stabler said, to restore the market, which peaked at about $40,000 per TDR more than a decade ago, because it signifies the county’s commitment to its increasingly fragile agricultural community.

“(The county) has got to stop undermining the equity that’s associated to those assets,” he said. “And this county is doing a disastrous job of that.”

Some farmers and county officials claim that receiving areas the commission created for developers filled over the last four decades as the county’s population nearly doubled to about 1 million, and as different county administrations and commission officials were replaced, the TDR program was neglected.

Without a vibrant market, it’s difficult to estimate the current value of a TDR. Lonnie Luther, president of the county Farm Bureau, pegged them at less than $5,000. James Clifford, a farmer and land use attorney in the county, said most banks and appraisers still give them a $20,000 value.

“There are a number of farmers who really need cash,” Clifford said. “I just can’t tell them there’s a market.”

Solutions to the problem may be forthcoming, however. The county is nearing the end of a study into the TDR program that would establish the total number of development rights left to be sold and where they might be used. Nearly 10,400 TDRs have been created and sold since the program began, said Jeremy Criss, the county’s director of agricultural services. Estimates on the total number of TDRs — including those already sold — range from 17,000 to 19,000, he said.

“That’s what we’re still arguing about,” he said. “But not all of them are going to be sold.”

County incentives to build different kinds of housing or other public benefits may be luring developers’ attention elsewhere, said Dale Tibbitts, special assistant to County Executive Marc Elrich. In commercial residential zones, for instance, developers can earn points to boost a project’s density. They can build affordable housing, public parking or art. They can protect historic resources or build near retail establishments and transit services.

They can also buy development rights from farmers — more expensive ones known as building lot terminations or BLTs — that can cost more than $200,000 each. A farmer can sell a BLT if they choose to forego building one of their allowable homes in the reserve. To some extent, agricultural preservation is wrestling with other urgent concerns such as the county’s affordable housing crisis, Tibbitts said.

“You can do a lot of other, less expensive things and get the same number of points, so these business folks have figured out, ‘I’m going to do the cheap stuff and get the most points,’” he said.

Butler disagreed that other incentives were dampening enthusiasm for farmers’ development rights. In fact, he said, those rights continue to be sold. A development requiring the sale of nine TDRs was approved in late December, and another requiring 56 TDRs was given the green light in March. He wondered if the market had slowed naturally as more TDRs were sold and fewer remained.

“In general, I think that’s probably what we’re experiencing,” he said.

A massive abandoned project near Clarksburg may have also driven the price of TDRs down, Criss and several farmers said. After it lost a lawsuit against the county in 2019, Pulte Homes, along with a partnered developer, quickly sold hundreds of TDRs, purchased for $12 million, at a loss, for about $14,000 a piece — the new market price, Criss said.

Wade Butler, owner of Butler’s Orchard in Germantown, said he hopes the market returns to a place where the sale of development rights helps other farmers like it helped his operation. His family had been trying to expand their 60-acre operation in the early ‘80s and was looking at other counties and even other states as potential destinations.

Then the reserve was created along with the TDR program. The Butlers sold a package of them at $4,000 a piece, enabling them to purchase 200 acres from an adjoining farm.

“It made a big difference in the sale price for us,” he said.

The Butlers have several remaining BLTs as well.

“We’d be very interested in putting them out on the BLT market if there was a market, but I don’t believe there is,” he said.

Criss and Tibbitts said the commission must establish new receiving areas to boost the development rights market. Protests from residents and other issues can often reduce the density of planned developments by as much as half in those receiving areas, Criss said.

But undeveloped receiving areas are still available, Patrick Butler said, and the commission awaits the imminent release of the county’s report.

“I believe the report is going to show that the program has been very successful,” he said.

The average farm survives on profit margins of 1-3%, Stabler said, and every dollar matters. Government officials need to recognize that the stability of agriculture in Montgomery County is at risk if its assets are consistently undervalued.

“There’s input costs, new technology, new equipment that I might not be utilizing because I can’t afford to buy it,” he said. “Even though 1980 seems like a long time ago — and it was — if you continue to come in and undermine and not prop up some of these mechanisms that were put in place decades ago to keep things going, (farming) is going to go by the wayside.”