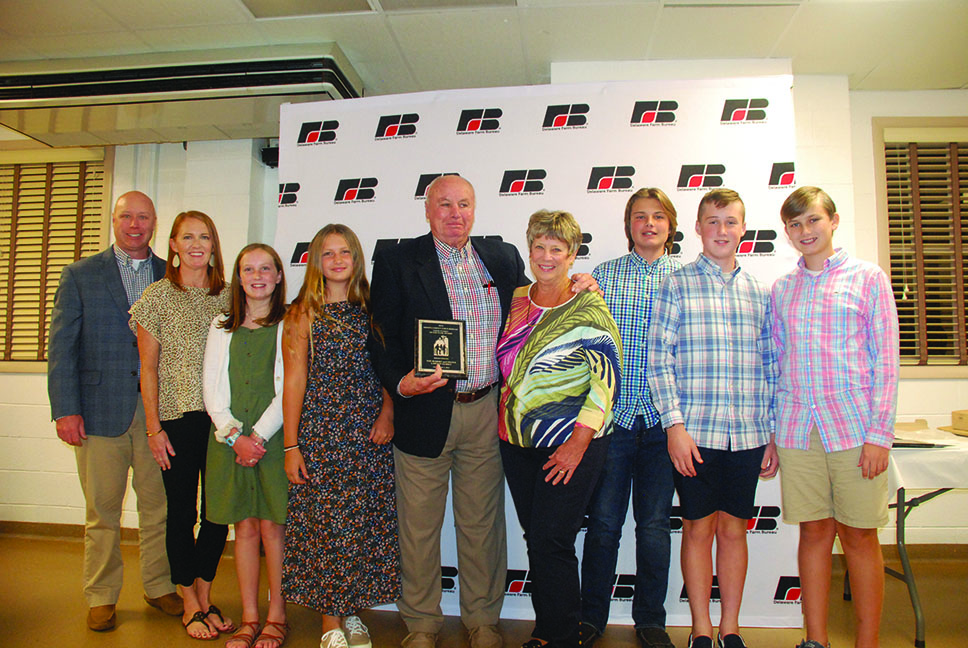 At its annual meeting Oct. 2, Sussex County Farm Bureau honored the Robert Lawson family of Harbeson as its Farm Family of the Year. Son Cliff and his wife, Meg, were out of state, but the rest of the family posed for photographs. From left are Todd Lawson and his wife, Stacy; granddaughters, Grier and Maeve; Robert and Diana Lawson; and grandsons, Case, Cooper and Mack. (Photos by Carol Kinsley)

SLAUGHTER BEACH, Del. — The main surprise of the night may have been spoiled as some 100 members of Sussex County Farm Bureau and their guests gathered for the organization’s annual fall banquet on Oct. 2 at Memorial Fire Department in Slaughter Beach, but there were more surprises to come.
Rep. Lisa Blunt-Rochester accepted the microphone for a few words and, before leaving for other obligations, extended congratulations to the SCFB’s Farm Family of the Year, which she correctly guessed was the family with the most members present.
The honor went to the Robert “Bob” Lawson family of Harbeson, Del., introduced by Jay Baxter. Bob Lawson started farming at a young age with his parents, Clifford and Jessie Lawson. His mother’s family, the Dodds, have owned farmland in Sussex County since the 1600s. The Lawsons still farm property the family owned in 1686.
Bob’s grandfather, Fred L. Dodd, at one time owned and operated one of the larger feed production plants, along with a grist mill, on his property at Morris Mill outside Georgetown.
Baxter, who said his great-grandmother was a Dodd, said he always thought the pond there was Dodd’s Pond.
In 1969, Bob began farming on his own with 16 acres and equipment from his family. Graduating from the University of Delaware with a degree in agriculture education, he taught high school agriculture for 32 years.
Baxter was one of his students and said he had more stories than there was time to tell. Baxter said “Mr. Lawson” had encouraged him to go to the National FFA Convention and “made me into the leader I am.”
In 1971, Bob and his wife, Diana, formed RoDi Heritage Farms. They joined the Farm Bureau that same year. Their two sons, Todd and Cliff, are active in agriculture and on the family farm.
Todd earned a degree in agriculture business management from University of Delaware and has been involved in the Delaware State Fair. Todd and his wife, Stacy, have two children, Cooper and Grier.
Cliff earned a degree in agriculture education from University of Delaware and became a high school ag teacher. He also serves as a Sussex County Delegate for Delaware Farm Bureau. Cliff and his wife Meg have three children, Case, Mack and Maeve.
Bob also earned a master’s degree in business administration from Wilmington University and then an honorary American FFA Degree in 2019.
He, Cliff and Meg are also involved in the Sussex Central Ruritan.
Now totaling 200 acres, RoDi Heritage Farms produces small grains on more than 1,000 acres throughout the Harbeson, Georgetown and Millsboro area and processes wood and mulch products at the homestead.
The farm has earned distinctions including Delaware Century Farm, Delaware Farm of Distinction and National Bicentennial Farm.
Accepting the award, Bob said, “the main reason I am here being honored are our five grandchildren. They will be involved from goats to combine. I want them to have a chance to keep on with the farm operation. Diana, my wife of 50 years, has been involved from Day 1 and that, it never would have happened.”
Steve Breeding, SCFB president, surprised some Farm Bureau leaders by tapping them to take over duties during the evening so that he could hurry to Dover to see his father, Ron Breeding, inducted into the 4-H Hall of Fame. Laura Hill, first vice president of the state Farm Bureau, took over emcee duties, explaining, “I had no notice.”
Guy Phillips, former SCFB president, was asked to introduce the recipient of the Distinguished Service to Agriculture Award, Debbie Absher, director of ag programs for Sussex Conservation District. 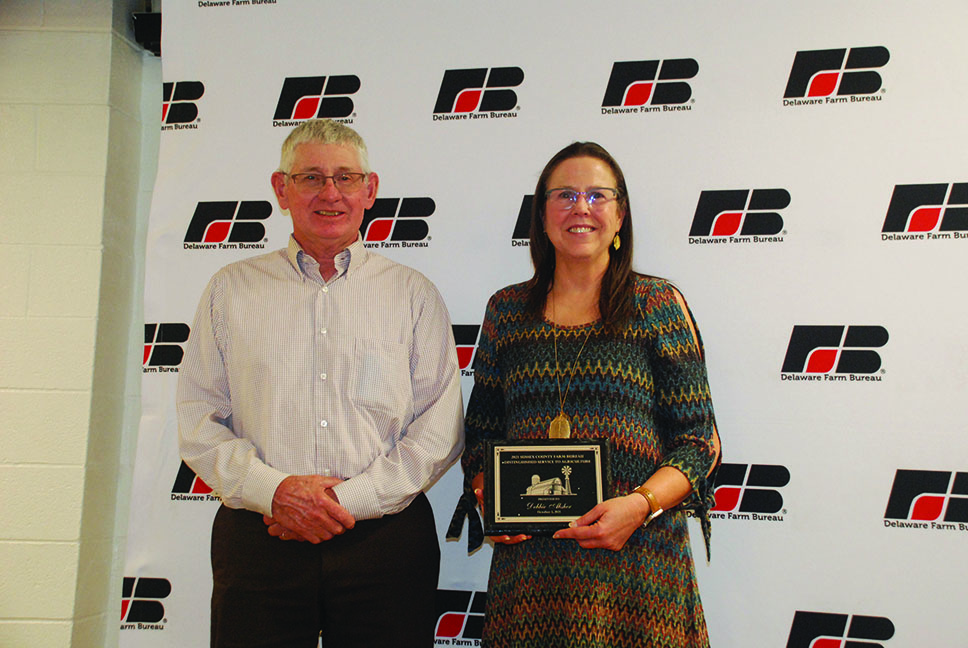 Absher began her career with Southern States and has been with SCD for 31 years.
There she often finds creative avenues to expand conservation efforts through the soil health initiative, conservation cost share/cover crop financial assistance program and other opportunities, Phillips said.
“Her passion is to help farmers help the land by providing them with technical and financial resources needed to implement best management practices…,” according to the Farm Bureau. “She was instrumental in bringing the Air Seeder to Sussex County and was involved in starting the Envirothon Competition in Delaware.”
Absher organized the 2020 and 2021 Delmarva Soil Summits and recruited the six NACD Soil Health Champions in Delaware, the most of any state in the Northeast — and all of them from Sussex County, including Phillips and Baxter.
Absher is involved in several committees, including the Chesapeake Bay Interagency Work Group, the Nonpoint Source Pollution Program Advisory Group, the Tax Ditch Modernization Work Group and the State Technical Advisory Committee.
Absher said she had been “blown away” when she heard she was the recipient and she “appreciated so much being recognized by this group.”
Representing Sussex County Council, Mark Schaeffer read a resolution declaring Oct. 2 “a day to honor” Absher’s achievements.
Scholarships in the amount of $250 were presented to Edward Yu, Nathan Loucks and Caleb Murphy. Megan Moriarty received a Women’s Committee scholarship for $1,000.