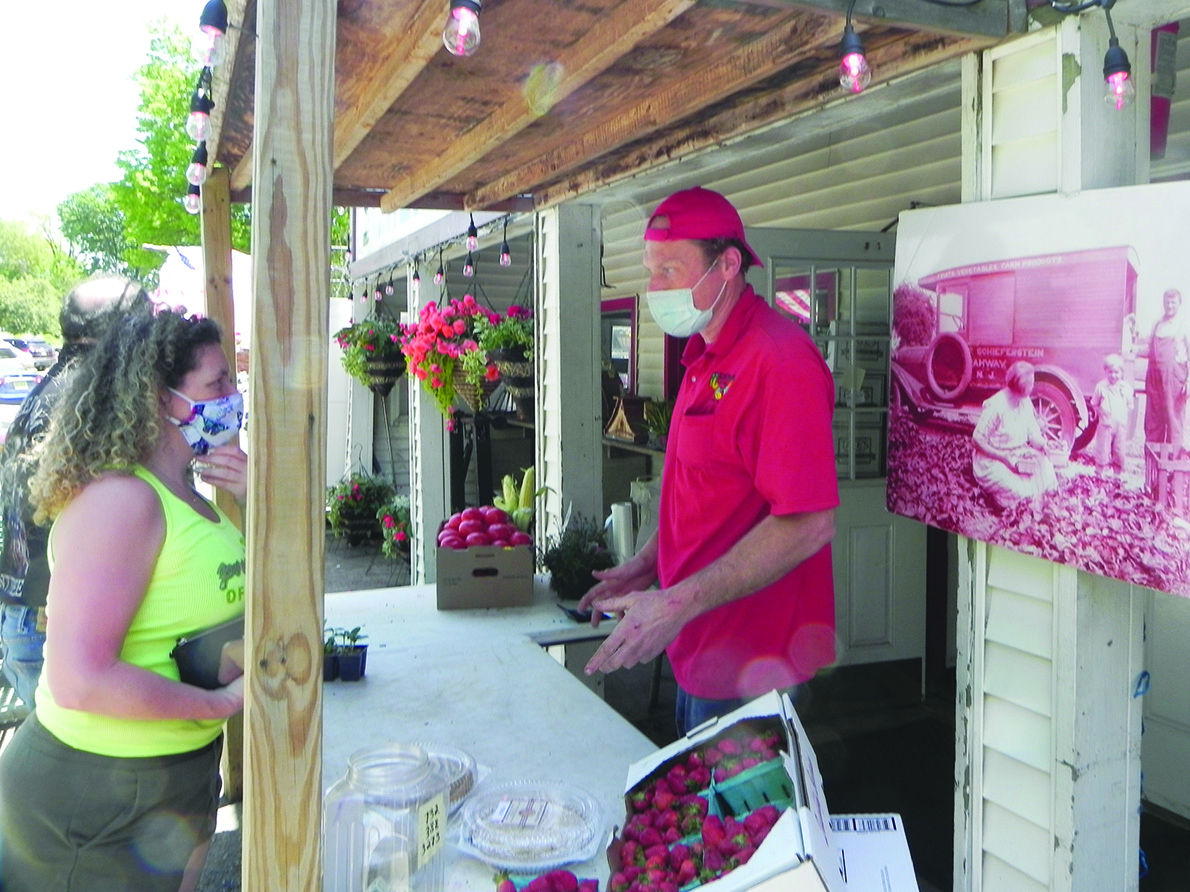 Andrew Schieferstein works with a customer on a recent Sunday at Schieferstein’s Farm Market in Clark, a busy New York City suburb in Union County near Westfield. (Photo by Richard Skelly)

CLARK, N.J. — Given that Clark, Cranford and Westfield are all bedroom communities for many who work in New York City, Schieferstein’s Farm and Garden Center has been well-positioned for growth since the retail farm stand and store was launched in 1949.
These days, Fred Schieferstein and his brother Andrew operate the farm stand and garden center, which sells landscaping plants, farm fresh fruits and vegetables, eggs, milk and even firewood during the fall and winter months.
“Typically, we don’t open the market until May 1 each year, give or take a few days,” Fred Schieferstein explained at the market on a sunny Sunday in mid-May.
“But under the circumstances this year with the pandemic, we were getting numerous phone calls to see if we were open as early as April 1,” he said, adding he and his brother and their staffers were going to wait, “but this year we saw the need to open it sooner.”
Working with an official from the Clark Township Health Department, Fred Schieferstein and his brother Andrew were supplied with face masks for employees and the occasional customer who might come to the indoor-outdoor market without one.
For the most part, the brothers said the system is working, thanks to Andrew’s wife Laura, who revamped the website so people could pay in advance and then come to the front of the market to pick up boxes of produce, or even have the produce delivered to the trunk or back seats of their vehicles.
Like the many other farmers retail stands around the state, Fred and his brother Andrew quickly noticed people didn’t want to be in crowded supermarkets with restricted hours.
The Schieferstein brothers have a 4-acre field behind their market and now that they’ve purchased deer fencing they plan to grow more of their own produce in coming seasons.
“A lot of people just don’t want to be in supermarkets, they impose limited hours and limited capacity and a lot of people don’t feel all that comfortable eating food that maybe has been touched by numerous people,” Fred said. “So we came up with this idea of a farm box or a fresh box. It’s not by any means a new concept; I know a lot of other markets have set this up, so my brother’s wife Laura our website so people can choose a fresh box of their own or choose a set box for a fee.
“Customers can customize their box or take one of our set boxes of produce.”
Customers arrive at the market, text that they are at the location and a runner will put the produce box right in their car and get paid, he said, “so it’s really very similar to a CSA program.
“This time of year, being as there’s not too much produce yet from New Jersey, I go to the Philadelphia Terminal Market and I’m able to get apples, pears, oranges, bananas, avocados and lettuces,” Schieferstein said.
By Mid-May they were able to start selling New Jersey-grown strawberries, blueberries and asparagus.
Schieferstein makes stops most weeks on his way back from the produce market in Philadelphia at farms in southern and central New Jersey before heading home to Union County, most of which is half hour by train from Manhattan.
Working with Clark’s health inspector in April, the Schiefersteins agreed to have staffers wear masks and gloves and to provide masks for customers without them.
All the while, no customers are allowed inside the store where refrigeration units hold frozen foods, milk, eggs, produce, pickled vegetables, processed fruits and honey in jars, and bags of nuts and dried fruits adorn the shelves at this always busy farm market on busy Madison Hill Road in Clark.
“No customers in the building wasn’t a requirement, but it ensures that none of our customers are touching the produce, and everything else is double inspected and handled in a clean, sanitized, hygienic way, with standard latex gloves and masks,” he said.
The brothers couldn’t do it without extensive walk-in refrigerators on-site, just as many other farmers markets do across the Garden State.
“Refrigeration is of primary importance,” Fred continued, “because, inevitably, you don’t sell out of everything in one day so you keep it fresh for the next day.”
Fred Schieferstein credited his father and grandfather — both named Fred — Uncle Wilfred, nicknamed Jim; Aunt Bess, and his recently-departed mother Charlotte for setting up refrigeration in the 1950s and improving the units as the technology improved.
“To this day, we have her and my father’s ashes stored here on a separate shelf in the offices in back,” he said, “given all the time they spent here and that they spent most of their lives here, this is a way for us to have some continuance.”