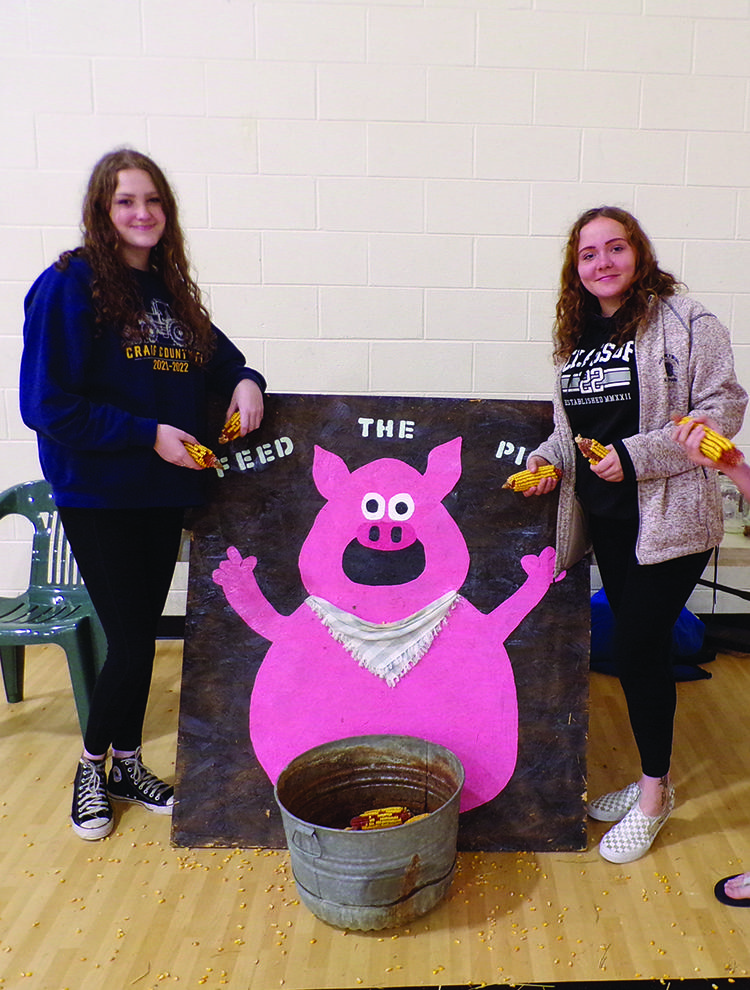 Eliva Muncey, left, treasurer of the Craig County High School FFA, and Chasity Wolfe, secretary, ran a Feed the Pig boothe at their fair. To win, the player had to get an ear of corn in the pig’s mouth. (Photo by Jane W. Graham)

NEW CASTLE, Va. — Rain and fog did not dampen the enthusiasm here May 7 when they forced the inaugural Craig County Lab Agriculture Fair to move inside the county’s only school building.
The school halls were filled with vendors of crafts and numerous other products. In the gym, games were played, plants sold and food enjoyed.
The fair was the idea of FFA members from a K-12 school that serves 512 students in a county with a population of about 5,100.
“The goal for the lab is to have a facility for students to learn by hands-on experience and advocate for agriculture as it fuels the world,” said Emily Nolen, faculty advisor for both middle school and high school FFA chapters. “We had a great turnout. I was very happy at the end of the day.”
Two high school high FFA chapter officers agreed. Eliva Muncey, treasurer, and Chasity Wolfe, secretary, talked about the fair while running a Feed the Pig game in the school gym.
They said the fair helps bring agriculture to all the students and gives the chapter members a way to raise money for their FFA jackets and to support the lab.
Mary Hunter, a member of the Craig County Farm Bureau Women’s Committee, who operated a craft booth and information table in the school, said Farm Bureau is proud of the kids.
The women’s committee was a primary sponsor of the fair. Rural King, an ag supply store in Pulaski County also joined as a sponsor.
Hunter said the fair was the student’s idea. When the committee learned about it, they joined the effort.
The ag program’s lab consists of a two-acre lot next to the school that holds three beef calves and sheep that students will show.
Muncey told how she had worked on the fence around the lab, driving wire, installing gates and more.
She and Wolfe said they are not from farm families but see FFA as a good opportunity.
“These students have had the ability to work on the project from start to finish,” Nolen said when it was all over. “They helped layout the land, built fences, installed the holding pen etc. They should be proud of the hard work; I know these students will have an impact on the agriculture industry now and in the future.”
While rejoicing in the success of the day, Hunter expressed frustration that some of the outside events and vendors could not be moved inside.
The students expressed their gratitude to Nolen for her part in the fair. This is her first year of teaching. She is a 2021 graduate of Virginia Tech who grew up on a Southwest Virginia beef cattle farm and was active in FFA, having been chapter president her senior year.