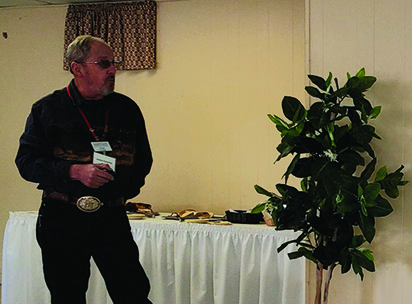 THURMONT, Md. — Early this month, in an email newsletter, Chuck Schuster introduced himself as the new executive director for the Maryland State Horticultural Society.
Recently retired from the University of Maryland Extension, Schuster hit the ground running by looking to help MSHS members sort out the information bombarding them from all sides on COVID-19 “and develop a list of Best Management Practices in dealing with this issue.”
Schuster’s hiring also marks a new stage for MSHS, which, for more than a century, has been an active, all-volunteer-run organization representing commercial fruit growers across the state of Maryland.
Last year, however, “we realized that to stay a viable organization, we needed to bring in someone whose job is just the organization,” said John Fendrick, current president for MSHS and owner of Rock Hill Orchards in Mount Airy.
“For the last five years, the board has wanted to not only reach out and grow the membership, but also be able to provide more benefits to our members as we continue to help them figure out how to be more productive” on their farms and orchards, Fendrick said.
One sticking point kept emerging, however: “There isn’t much downtime for board members, even during the supposed slow times of the year,” he said.
Schuster hopes to ameliorate that. “The board is made up of a lot of farmers and orchard owners with other primary responsibilities,” he said. “I see my role as pulling all the pieces together as well as bringing some dollars in so the growers can continue to do their jobs.”
Fendrick also noted that the new position provides “added value for members because now you have someone who can focus on what needs to be done to benefit the organization.”
In addition to continuing past events as circumstances allow, and looking for ways to provide more virtual events, Schuster explained that initial goals for the new position include conducting “a needs assessment to identify where research should be focused for both the near and mid-term and developing a tool kit of best management practices” to be available to member producers.
They also hope to grow awareness of the organization’s value of the MSHS membership among both newer farmers and the younger generations within their current members’ ranks.
Toward that end, they will soon be launching a Facebook page and a closed Facebook group on behalf of the organization and its members.
“Lots of younger producers utilize that platform,” Schuster said, and it gives them an opportunity to see the organization as relevant to their production efforts. He also sees the addition of the Facebook platform as yet another opportunity to educate both current and future customers about their members’ farms.
COVID-19 “has gotten people thinking about food and local food in particular,” Schuster said. “People are now looking at where they can go for their food, and anything we can do to market to them and give them a connection to local agriculture benefits our members.”
“The board was fully behind this decision,” said Fendrick. “We know we can do so much more than what we’ve been doing and hiring an executive director is a huge step towards accomplishing that goal.”