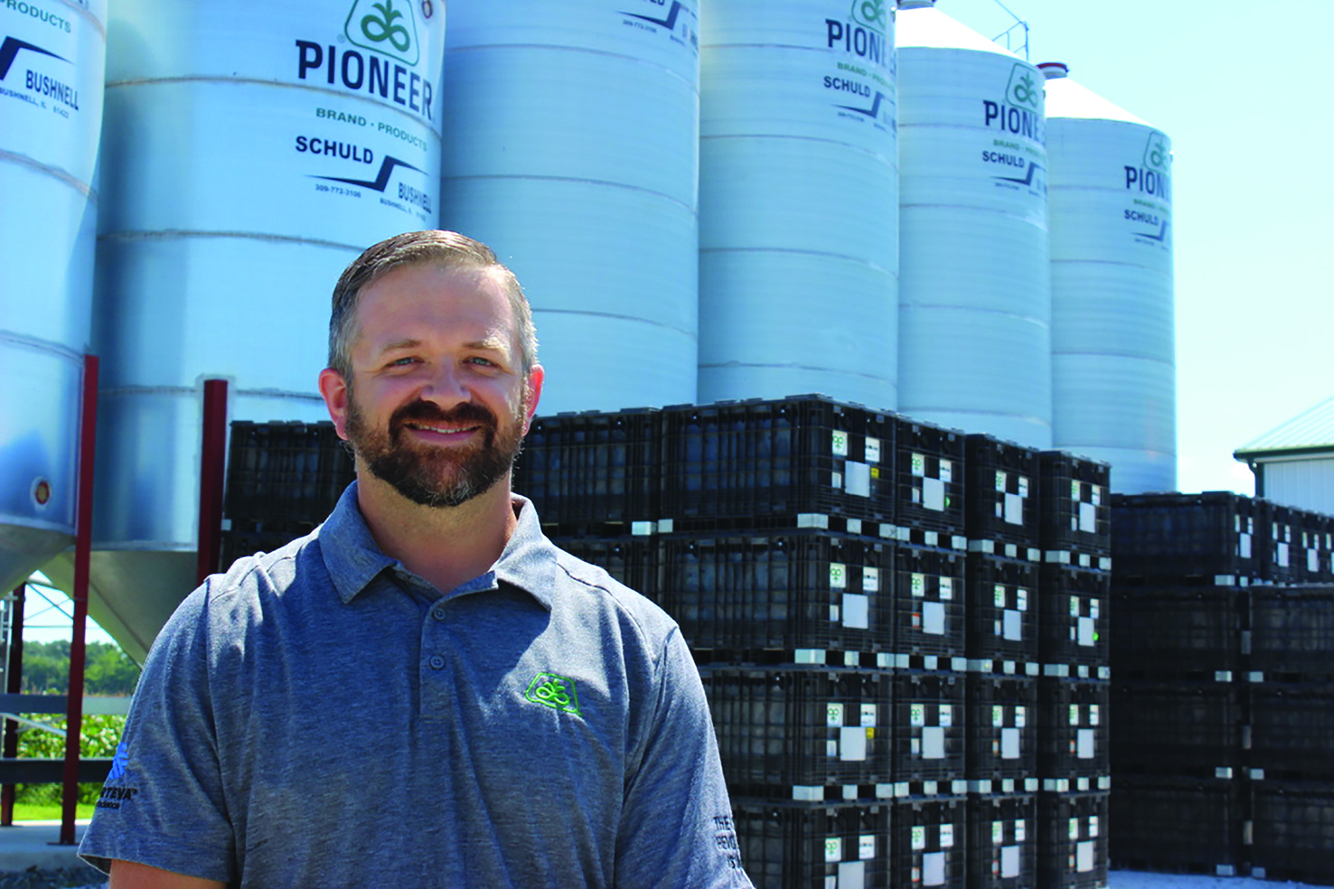 Jason Scott, standing at his family’s Walnut Hill Farms in Hurlock, Md., was named the winner of the James R. Miller Award during the Maryland Commodity Classic, held virtually on July 23. (Photo by Sean Clougherty)

At age 38, Dorchester County farmer Jason Scott has already logged several years of service to the Maryland and national grain industries.
Presented with the Maryland Grain Producers Association’s James R. Miller Award during the virtually-held Commodity Classic on July 23, he said he still has more time to give.
Scott is the manager of his family’s grain farm, Walnut Hill Farms, a 1,500-acre operation and Pioneer seed dealership.
The farm grows corn, soybeans, wheat, malting barley and sweet corn.
As a college student, Scott was one of association’s scholarship recipient and after graduating from the University of Maryland, he said he was encouraged to “repay” that award by getting involved in the organization.
He joined the board of directors in 2004 and became the youngest to serve as president of the Maryland Grain Producers Association Utilization Board from 2005-07.
In 2008, he joined the board of U.S. Wheat Associates, a national organization focused on expanding U.S. wheat exports.
He served in three of the group’s four officer positions including chairman, a first for a Maryland grower.
As chairman of U.S. Wheat, Scott said he has traveled to 20 countries and about 15 states, touring flour mills, talking with wheat buyers and end users and learning about other wheat growing practices around the nation.
“I’ve learned so much being on those boards,” he said during the virtual meeting. “I really think that getting out of my bubble here on the Eastern Shore has been good for me, my personal growth as well as the growth of our operation.”
He said having a supportive family behind him — especially his parents Doug and Patti and his wife Casey — was a big part of him being able to serve. As U.S. Wheat Chairman, he said he was away from the farm about 80 days of the year.
The James R. Miller award dates back to 1998 and has recognized farmers, elected officials, researchers and agency representatives for their accomplishments and dedication to Maryland’s grain industry.
Miller, the longtime chairman of the University of Maryland’s Agronomy Department was the inaugural winner.
“I’m honored to be included in that list,” Scott said. “I hope I will live up to the legacy of people that have won it in the past.”
Scott remains a board member for both MGPA and U.S. Wheat and said his service to the industry will continue.
“I feel I have a lot more to give in terms of my time and service to the industry,” he said.
He also encouraged those gathered online to do the same at either the local, state or national levels.
“The best thing you can do is give your time and get involved,” he said. “You get a chance to shape the future of your community or the industry or whatever it may be that you’re involved in.”