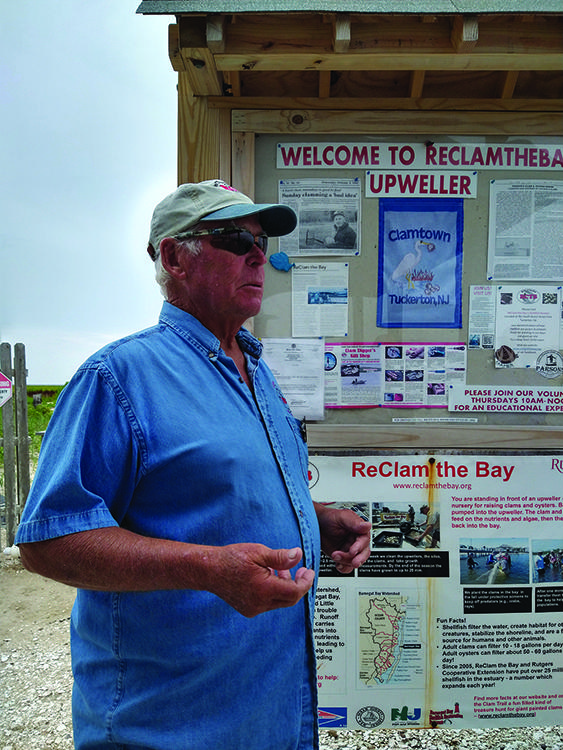 TUCKERTON — Students in a Rutgers Cooperative Extension class devoted to the Barnegat Bay Shellfish Restoration Program enjoyed a field trip at the conclusion of the class.
The class — which was held virtually in May and June — and its curriculum and field trip were organized in part by Ocean County Rutgers Cooperative Extension Agent, assistant professor, Dr. Doug Zemeckis. Zemeckis is an Edison native who spent summers in his youth at the southern New Jersey shore and has long been fascinated with all things related to salt water fishing, oceans, bays and estuaries, including the Garden State’s rebounding oyster and clam industries.
The Barnegat Bay Shellfish Restoration Program has about 12 upwellers located in key positions around Barnegat Bay to allow volunteers and staff to monitor water quality and the overall health of the bay’s shellfish populations.
ReClam the Bay is a partnering non-profit organization based in Barnegat Bay with Rutgers Cooperative Extension of Ocean County, Zemeckis explained.
“We teach them the hands-on activities as well as the coastal science knowledge that they will need to be responsible stewards of the Barnegat Bay watershed,” Zemeckis said, “So shellfish gardening and beach cleanups are just a few examples.”
Class members, about 40 in all, got a tour of the Tuckerton Seaport and Baymen’s Museum led by Forrest Jennings, a student at Stockton State University going into his senior year, majoring in environmental science and marine biology.
During his time at Stockton, Jennings has been involved in the marine science field station, “where we go out onto the clam beds in Barnegat Bay and rebuild the clam beds, and this project does so much good for the bay and the whole area.”
Clams and oysters play a huge role in filtering and cleaning up water and hundreds of volunteers have been involved with the Barnegat Bay Shellfish Restoration Program since its inception in 2005, and the water quality there has improved markedly in the last 17 years.
Following the extensive tour of the Tuckerton Seaport and Museum the class moved to the ReClam the Bay Upweller at 1300 Green St., Tuckerton, two miles away, a bay front dock with equipment to suck in water, clams and small fish from the bay.
Dominic Tumas and other volunteers with ReClam the Bay gave short talks on how the facility operates to maintain water quality health in the bay and how the addition of thousands of clam beds are improving water quality in Barnegat Bay, which encompasses 200 square miles when the entire watershed is included. It is New Jersey’s largest body of water.
Zemeckis said last year the class had about 30 participants and the course has been growing a little bit every year.
“Since the class was mostly all webinar-based, today was an opportunity for the students to get out, get down here on the waterfront, learn about maritime history and the local ecology and learn hands-on stewardship principles,” he said.