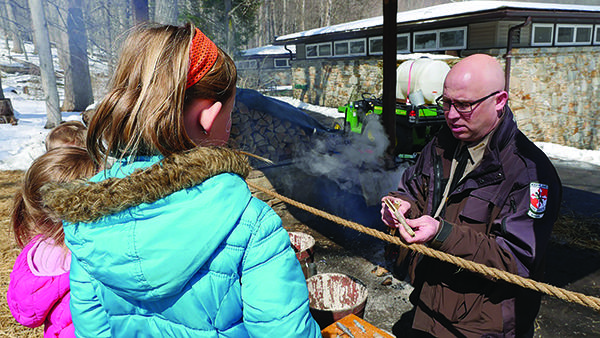 CORRIGANVILLE, Md. — The sweet taste of maple syrup starts in the mountains of western Maryland.
There, towering sugar maple trees provide the shelter for a crop that is harvested during a short season that is highly based on the temperature variance between day and night.
Leo Shinholt knows this aspect of agriculture quite well. He operates S&S Maple Farms. He’s been harvesting sugar water since he was 9 years old. Then, he looked to his grandfather for guidance. He’s now 74 years old.
Today, he owns 460 acres and leases 200 additional acres. The acreage is located in Allegany County and across the state border in Bedford and Somerset counties in Pennsylvania.
Family members and others work with Shinholt in these farming operations.
Harvesting sugar water is labor intensive. A small hole is drilled 1 inch to 1 1/2 to 2 inches in each augar maple tree. A spile is then inserted into the hole.
Shinholt said while he still has a few of the spiles attached to buckets hanging from trees, almost all of the sugar water is gathered through tubing attached to the spiles.
About half of the liquid travels from the trees to tanks through the tubing by gravity, with the other half pulled forward to tanks by use of vacuum pumps. The sugar water harvested then goes through a heating process and reverse osmosis.
Best conditions for gathering the sugar water are when it’s about 25 degrees F in the evening and about 45 degrees F during the day, according to Shinholt. “Depending on weather conditions,” he said, “harvesting typically begins in mid-February and ends in early April.”
Before that, the trees are hibernating and not producing sap. After the trees start to develop buds, the composition of the sap changes and it doesn’t produce palatable syrup.
Syrup is “graded,” according to its color, with each color having a different intensity and culinary use.
In recent years, Shinholt explained that harvesting involved 10,000 to 12,000 sugar maple trees.
“We’re blessed with hardwoods in this area,” Mr. Shinholt said. “All of the trees have grown naturally here.”
When the sugar water begins to run, Shinholt said the liquid is as clear as regular water.
“In 2021, it took about 63 gallons of sugar water to produce one gallon of finished product,” Shinholt said. “The sweetness of the sugar water can vary from year to year. We aim for 12-percent sugar concentration in our product. A harvest in an average year includes 3,000 to 3,500 gallons of finished product — the sugar maple syrup people love to put on pancakes, waffles, and all sorts of other food products.”
The maple syrup is packaged in glass, plastic, and, in some cases, tin containers.
“It’s been difficult to get all of the containers, especially plastic containers, this past year,” Shinholt said. “Container sizes vary. They range from 3.4 ounce to gallon containers with eight-, 16-, 32-, and 64-ounce containers in between.”
Maple syrup production has a long history in Western Maryland, but Shinholt added there are only a few farms left still producing sugar water from sugar maple trees in Garrett and Allegany counties.
Shinholt and S&S Maple Farms participate each year in an annual maple festival held by the state Department of Natural Resources.
“The Maple Syrup Festival at Cunningham Falls State Park is a celebration of the history, agricultural development, and continued tradition of creating syrup from Maple sap,” said Jeremiah Corbin, lead park ranger at Cunningham Falls and Gambrill State Parks in Maryland. “It is fun for the whole family and an excellent outing for any group. The festival is complete with a maple syrup demonstration using the ‘batch method’ of production while other means of production are discussed.
“Interpretive talks accompany the production of these batches of syrup which take roughly 4 hours to produce.”
This year marked the 50th anniversary of the Maple Syrup Festival, which was held in March.