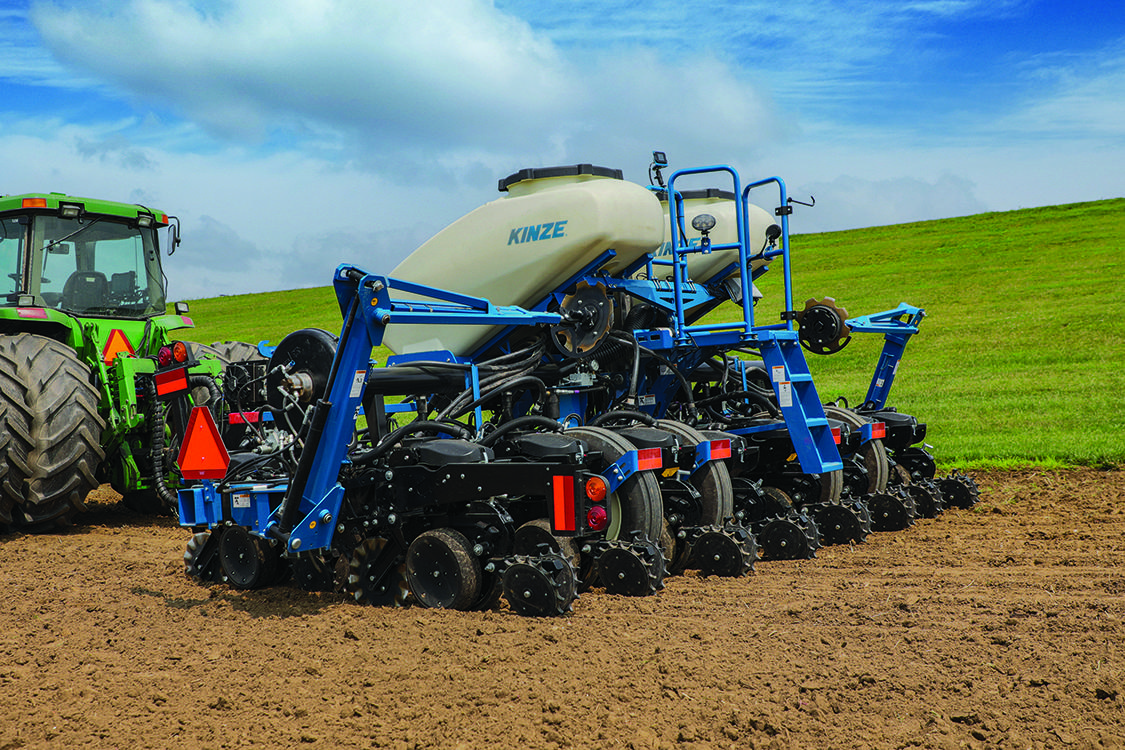 The Kinze 3505 planter enables farmers to plant at speeds up to 12 miles per hour and can be used to plant corn, soybeans, sweet corn, cotton, sunflowers, milo/sorghum, edible beans, sugar beets and wheat. (Photo courtesy Kinze)

On Feb. 16, Bayer held its Crop Science Annual Research and Development Pipeline Update. During this event, Bayer introduced its Short Stature Corn. With this new hybrid, the company sees the potential for additional sales opportunities in North America.
“Standing one-third shorter than standard height corn hybrids, the technology improves standability, including better greensnap and stalk lodging tolerance, to help reduce crop loss from challenging environmental conditions and extreme weather like high winds,” according to the spokesperson at Bayer. “Short Stature Corn allows for the more precise application of crop protection and the optimized use of key inputs such as nitrogen.”
The presentation at Bayer’s Crop Science Annual Research and Development Pipeline Update indicated that Phase 4 Commercial Trials of Short Stature Corn are anticipated in the United States in 2023.
That year, 150 early-adopter growers will be able to grow it in Bayer’s groundbreakers’ trials ahead of the commercial launch which is set for 2024.
Seed patents similar to Bayer’ Short Stature Corn have become an integral part of agriculture during the past few decades, but the process where seeds became an annual purchase by farmers did not began with seed patents secured by large corporations. Instead, that process began in earnest early in the last century.
Corn is a good example of a crop to consider when looking at changes through the years.
“About 95 percent of our corn acreage now is planted to hybrid corn,” according to the USDA. Farmers in the United States produce, as of 2018, “… at least 20 percent more corn on 25 percent fewer acres than in 1930, when seed of hybrid corn became available in quantity to American farmers.”
The USDA noted that from the time of the initial settlements of Europeans in what would become the United States, “… farmers selected seed ears from the standing stalk or from the crib. They entered the best ears of these open-pollinated varieties in fairs and shows, and people thought the prizewinners would pass on their superiority to their progeny and so improve yields. It did not turn out that way.”
Research in the early 1900s, the USDA indicated, helped identify ways to produce better seeds through hybridization.
The Connecticut Agricultural Experiment Station was part of those research efforts. There, it was determined that a “… system of crossing male hybrid corn [was] commercially feasible,” according to the USDA. “The first commercial double-cross hybrid, Burr-Leaming, was released and recommended by the Connecticut station in 1921.”
As research efforts continued, some seeds become commercially viable.
“When the best of them became commercially available, some farmers were reluctant to adopt them, but demonstration plantings and field observations proved the worth of the hybrids,” the USDA stated. “The demand for hybrid seed in 1935 in the Corn Belt exceeded production, and the hybrid seed industry developed rapidly…Besides an increase in production, other benefits have been achieved by the use of hybrid seed. Hybrids make more efficient use of applied fertilizer. Progress has been made in developing hybrids resistant to some insects and diseases; the result is a product of higher quality and a more stable yearly production. Because of their greater uniformity in maturity and resistance to lodging, the hybrids have helped make large-scale mechanization possible.”
Among businesses that developed and continue to develop seeds through research is Bayer.
The firm expanded its operations in this area when it completed its acquisition of Monsanto Company in 2018.
“Intellectual property rights are an important part of the innovation process, especially when it comes with large investments of time and money, specialized research and some risk of failure,” according to a spokesperson at Bayer. “Patent protection provides a time limited right and offers the ability to recoup investments in research and development.”
“Patents provide a mechanism for the early disclosure of scientific findings and inventions which can be used to further scientific advances,” the spokesperson continued. “Strong intellectual property protection provides the incentive to share information. This is critical to continue to maintain and increase innovation. It takes breeders between eight and twelve years to develop and commercialize a new seed variety. To develop an innovative trait that is applicable in multiple varieties sometimes takes even more time.”
Hybrid seed varieties are quite extensive at Bayer.
The company spokesperson said in 2021, “Bayer highlighted eight total advancements of new crop protection active ingredients, new seed traits and digital models in its annual research and development pipeline announcement. In addition, we refreshed our seed portfolio with about 500 new hybrid and variety deployments and our crop protection portfolio with eight new formulation launches and more than 300 new registrations.”