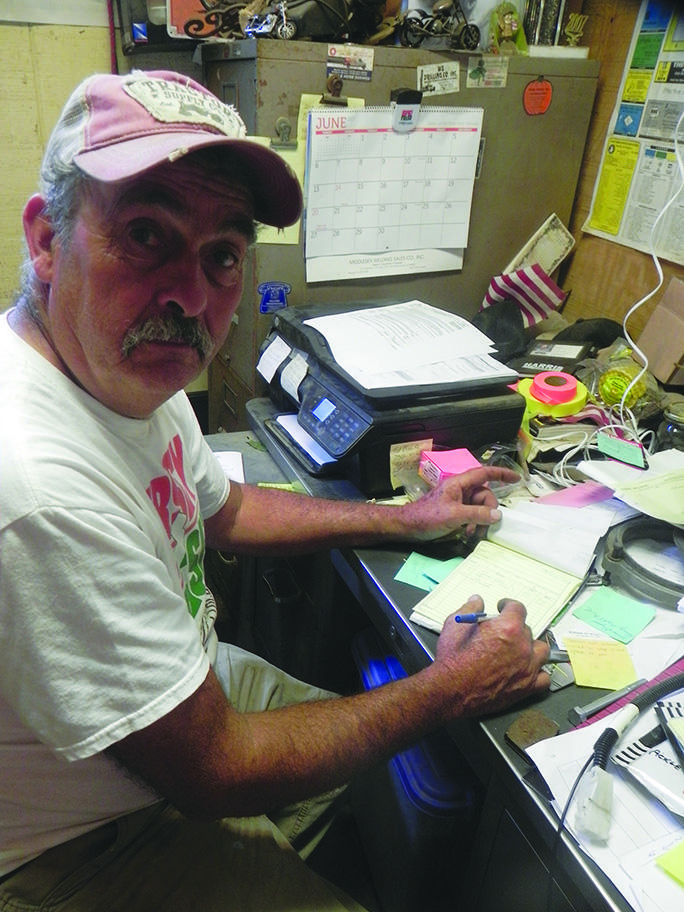 EAST BRUNSWICK — At the height of the growing season, when time is at a premium, spending time at the home office computer can be next to impossible.
Veteran fruit and vegetable farmer Jim Giamarese said he keeps his accounting system as simple as possible.
“You just go to the stationery store and buy an invoice book. Say you come to buy 10 (bags of) corn and it’s $15 a bag. That’s $150, the wholesale rate. If you pay me there on the spot I give you the yellow slip and I rip off the white slip. If you do not pay me I leave the white slip on the book” he said.
“The next time you come to buy corn I have it right there in the book — ‘Hey, you didn’t pay me from last time so you owe me. That pretty much keeps it straight for me,” he explained.
At his home office, Giamarese and his wife Sue use a computer program called AgCheck.
He also has a laptop he uses for other record keeping for his vegetable fields and apple and peach orchards.
Giamarese said AgCheck is an older computer program and he may soon switch to QuickBooks, “but basically it’s just an electronic checkbook on the computer. Ultimately, it’s all hubbub: one and one is two and one and one has been two since the beginning of time.”
Giamarese added he pays all his bills through AgCheck.
Giamarese has two cash registers for his retail market and said over time, he’s simplified that system, too.
“We try to break it down to three or four departments. There was a time when we had 10 departments,” he said. “In other words, if you came in and you bought three corn you hit the sweet corn key, four tomatoes we hit the tomato key so at the end of the day you could look at your categories and say, ‘Well I sold $500 worth of sweet corn, $300 worth of tomatoes, $500 worth of peaches.’We have another product key for bought produce like bananas, oranges, stuff we brought in wholesale, the stuff we don’t grow.
“Say I buy tomatoes from you but I just give you $500 cash, I’ll write your name in on AgCheck and I’ll write a debit for $500 and then I’ll immediately put $500 in because I paid with cash so basically my checkbook is keeping track of you,” he said.
“At the end of the year, when I do my taxes it goes under the category of ‘bought produce,’ ” he explained.
With the streamlined accounting system, Giamarese and his wife Sue have time for more pressing matters at the height of the season which is critical when looking after so many acres of fruit trees and vegetables, a bustling you-pick operation and a booming retail stand on weekends.
A third generation farmer, Jim and his wife Sue were named “Outstanding Young Farmers” in the late-1980s and prior to that, they were both driving home heating oil trucks for Raritan Oil Co. in Edison.
“Now we’re getting a little bit older and a little bit more tired, so this year [the retail stand and farm] will be closed Mondays and Tuesdays, but the bulk of our business remains pick-your-own,” he said. “In the business world they call these profit centers, so what is our profit center? It’s our pick your own business.”
He charges a flat fee to come into the vegetable fields and orchards. To discourage you-pick families from eating strawberries, blueberries, tomatoes and peaches in the fields, he posts employee monitors and a few polite signs in the fields.
He opens his preserved farmland up to agritourism in the fall by way of a corn maze, sunflower maze, more hayrides and you-pick pumpkins.
“One of the things I learned through the grapevine from other farmers, if you come out on a Saturday or Sunday, we charge $8. Five dollars is a credit, so it forces them to buy $5 worth of produce and it’s three dollars for a hayride,” he said.
He’ll give you-pickers who decline the hay ride a $3 credit.
“That system seems to work pretty well now.”