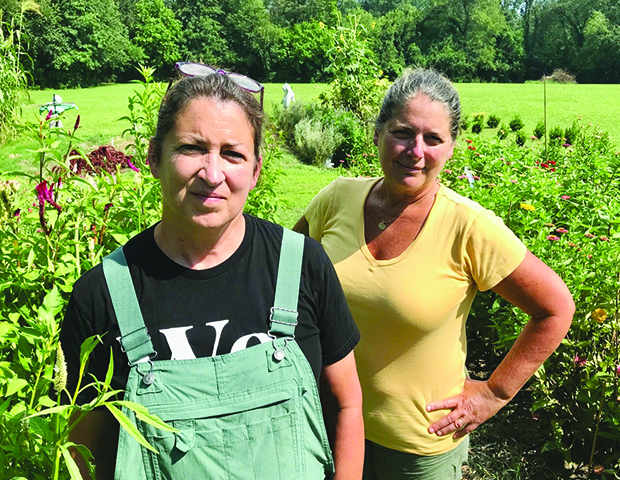 DOVER, Del. — When sisters Paula Soghomonian and Vicki Cronis-Nohe quietly launched Derby Mill Farm earlier this year, they were growing cut flowers and herbs on a tiny patch of land behind their childhood home. Then COVID-19 spread to Delaware in March and shut everything down.

Flowers, at that point, seemed a little “frivolous,” Cronis-Nohe said. They decided to begin raising produce.

“It was more for us just to have safe, clean food, and then, like, ‘Hey, if we can help out the community surrounding our farm, we’ll do that too,’” the 55-year-old former photojournalist said.

In addition to the bouquets they hawked at local farmers’ markets, the sisters began growing Roma tomatoes, cucumbers, peppers and string beans as well. It’s a new beginning for the acreage behind their childhood home, still owned by their parents, Sam and Joan Cronis. The 12-acre property was a gristmill and working farm in the early 1900s.

Soghomonion and Cronis-Nohe both returned to central Delaware about a year ago with the hope of reclaiming and cultivating the idling backyard. Soghomonian joined Future Harvest’s beginning farmers training program while Cronis-Nohe leaned on significant gardening experience, sought out mentors and listened to agricultural podcasts and tutorials on the Internet.

Soghomonian, 52, and her husband moved from the Washington, D.C., area back to Dover, purchasing a property that was once part of their farm, bringing it back into the family fold. Cronis-Nohe and her family moved to Denton, Md.

She continues to work as a vendor for a men’s accessory company in the retail industry, and Cronis-Nohe took a buyout after a long career with the Virginian-Pilot newspaper in Norfolk. At the newspaper, she spent significant time taking photographs for a story about Perennial Roots Farm in Accomac, Va. She said she learned quite a bit talking to farm owner Natalie McGill, who noticed Cronis-Nohe’s interest.

“She was really curious, really interesting,” McGill said. “Vicki was the type of person who always knew the right question to ask and ways to dig deeper.”

“When we made the move here last year, we had already been doing in a slow, no-till way, developing the beds and trying to convert field to farm basically,” Cronis-Nohe said. “So that was already a work in progress. We just didn’t know how it was going to look once we relocated here. We just wanted to make sure we could even grow stuff before we put ourselves out there.”

“I’ve always liked the creative side,” Soghomonion said. “It appealed to me to be able to design (bouquets).”

They quickly nestled themselves into the local farmers’ market scene, joining several, including Capital City Farmers Market in Dover and Kent Island Farmers Market in Stevensville, Md., after both states reopened markets in May following a three-month shutdown due to the coronavirus. Cronis-Nohe was recently surprised to learn that a fellow vendor stopped selling cut flowers out of respect for Derby Mill. They were both selling Roma tomatoes, and she wondered if she should reciprocate.

“It’s been interesting to learn the dos and don’ts, how you respect your fellow vendors,” she said.

“We’re slowly changing the landscape,” Cronis-Nohe said. “We’re going to start next week, hopefully, adding more beds. We probably will till first just to break ground and then from there on will be no-till. … I think next year we’re for sure going to make a shift towards expanding the vegetables, and maybe growing unique things that other people aren’t growing.”