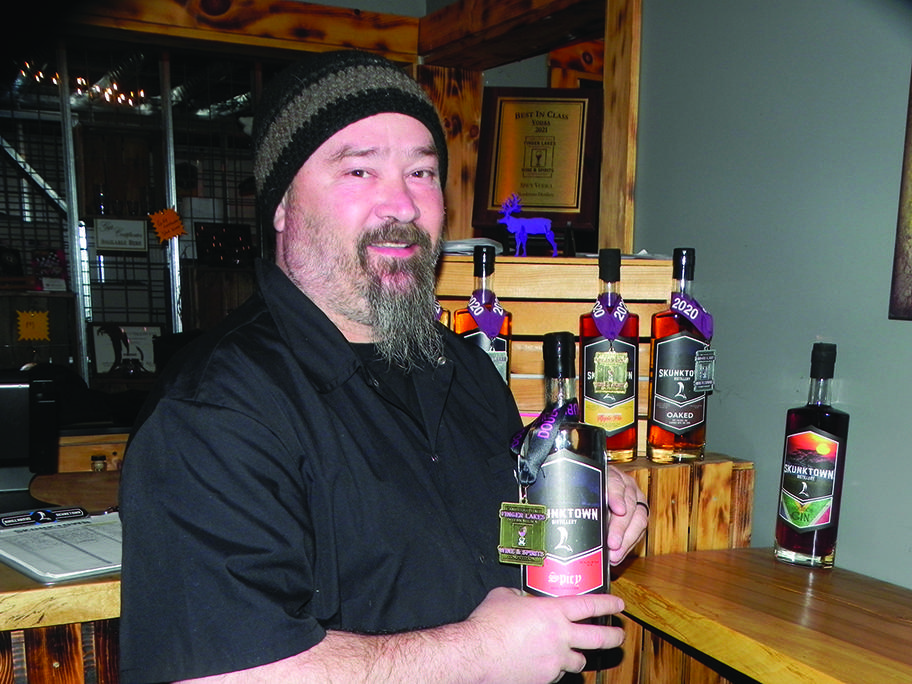 FLEMINGTON, N.J. — Musician and tile setter turned award-winning spirits maker Paul Hyatt has made it on his own in a very competitive business.
In December, 2021, he celebrated five years owning and operating Skunktown Distillery.
Part of his success has been in using Jersey-grown ingredients.
“We’ve got a bunch of different recipes that we’ve created here that you won’t find anywhere else,” owner Paul Hyatt said. Local farmers Hyatt works with include Jon Knox of Dogwood Farms, Kent Kimball at Kimball’s Farm in Oxford, Andrew Keris at Keris Potato Farm in Robbinsville and apple grower Josh Goldman of Gold Manor Farms, also in Delaware Township.
Using Andrew Keris’ potatoes, Hyatt and his team won first place in 2021 in the vodka category at the Finger Lakes International Wine and Spirits Competition. Skunktown’s spiced vodka is a popular item, yet their No. 1 seller is their Gold Manor Farms Apple Pie Spirit, a delicious combination of vodka and rum made from apples with a cinnamon “apple pie” flavor.
The spiced vodka was something different for the judges at Finger Lakes, as it has New Jersey grown Carolina reaper peppers mixed into the vodka.
“We won that out of 1,750 entries, and the fact that judges from all over the world were involved has gotten us a lot of attention in the spirits world,” Hyatt said. He’s been using Keris Farms potatoes for the last two years.
“We use potatoes for five of our products,” Hyatt said. “From the potatoes – we hand peel every one of them – we make a regular vodka, a golden gin, a rooibos tea gin and we make a spicy vodka.”
In the 2021 Finger Lakes International Wine and Spirits competition, Skunktown’s spiced vodka won a gold medal and a plaque for Best in Class. Winning the gold medals for spiced vodka in 2021 has caught the attention of the biggest liquor distributor in New Jersey, Fedway, a company that services about 7,000 liquor stores, bars and restaurants, Hyatt said.
“The spiced vodka is selling well and quickly coming up because of all of the awards we’ve been getting. It’s spiced with Jersey grown Carolina reaper peppers.”
Hyatt also produces a “peach moonshine,” sold in-house only because it’s produced at the end of the growing season for peaches.
“We used fresh Jersey white peaches for it, and once it’s done it’s done. We have to wait until next year to do another batch, so it creates a demand for it.”
Along with his wife Jeanie, daughter Ella, 19, and son Benjamin, 22, Hyatt credited his general manager, Russ Hoffman, a former marketing specialist on Wall Street, for the success that Skunktown Distillery has enjoyed and for his careful strategizing to take this small business to the next level.
“Russ, who is semi-retired now, has been instrumental in finding ways to get us to expand; he worked for Goldman Sachs, Lehman Brothers, all the big firms. He has seen the value in what we’re doing,” Hyatt said.
“Who knows where it’s going to go from here.”
Skunktown Distillery was launched in Feb., 2016. After getting all the necessary local, state and federal permits and licenses in place, which took many months, Hyatt and a small crew of friends opened their doors to the public on Dec. 22, 2016.
The facility, located on the old Flemington Raceway in an industrial / office park, is only open for tours and visitors on Friday nights and Saturdays.
Soon, Skunktown will move to a new location in downtown Flemington.
Distilling was always one of those things that seemed too foreign to him, he said. He took his inspiration and motivation from a show on the Discovery Channel, “Moonshiners.”
“I thought if they can do it, I have to try,” said Hyatt, who lives with his wife, son and daughter in nearby Delaware Township.
The founding of Skunktown Distillery can be traced back to sitting around a fire pit in west Jersey.
“A friend brought some moonshine,” he said, admitting when people from other states think of New Jersey “they don’t know about these horse farms out here in Delaware Township. We were drinking beer and he went and got the moonshine and brought it in the backyard. I said, ‘I always wanted to make this stuff.’ ”
After almost two years in business together with his former partner, Hyatt explained, “we wanted to take it in different directions, so I chose to keep going, because being a tile setter at my age, you really take a beating on your hands and knees.”
The name Skunktown comes from the town of Sergeantsville, known back in the 1700’s as Skunktown. Hyatt funded much of the start-up costs of opening the distillery with his custom tile installations, but, Hyatt admits, “tiling is a young man’s game.”
Unless it’s soaked in oak chips, the color of the liquor should be clear, and it’s Hyatt’s own sophisticated palate that is the arbiter of what gets released for sale and what doesn’t.
“If something comes off the still that doesn’t taste right, I’ll set it aside. I won’t release it,” he said. Sometimes, the barometric pressure and humidity messes with the distilling process in his two stills, and “oftentimes, there’s no way to fix it right then and there, so I’ll just re-run it.”
Re-running a batch can take anywhere from 16 hours to three days, he said, depending on what type of spirit is involved.
“The funny thing is, our spirits here have their own unique flavor to the point where I can say, okay, this spirit here doesn’t have the flavor that we’re used to, so we’ll re-run it. I’m convinced 100 percent that copper stills make the spirit. If we didn’t have the copper it’s not going to have the right flavor. We know exactly what the temperature is at all times and we can control the temperature at all times.”
“You will never get any headache from our stuff,” Hyatt said. “I know! I’ve tested it all, many times. I’ve done the R&D!”