Social media is for connecting to people (Green Marketing) 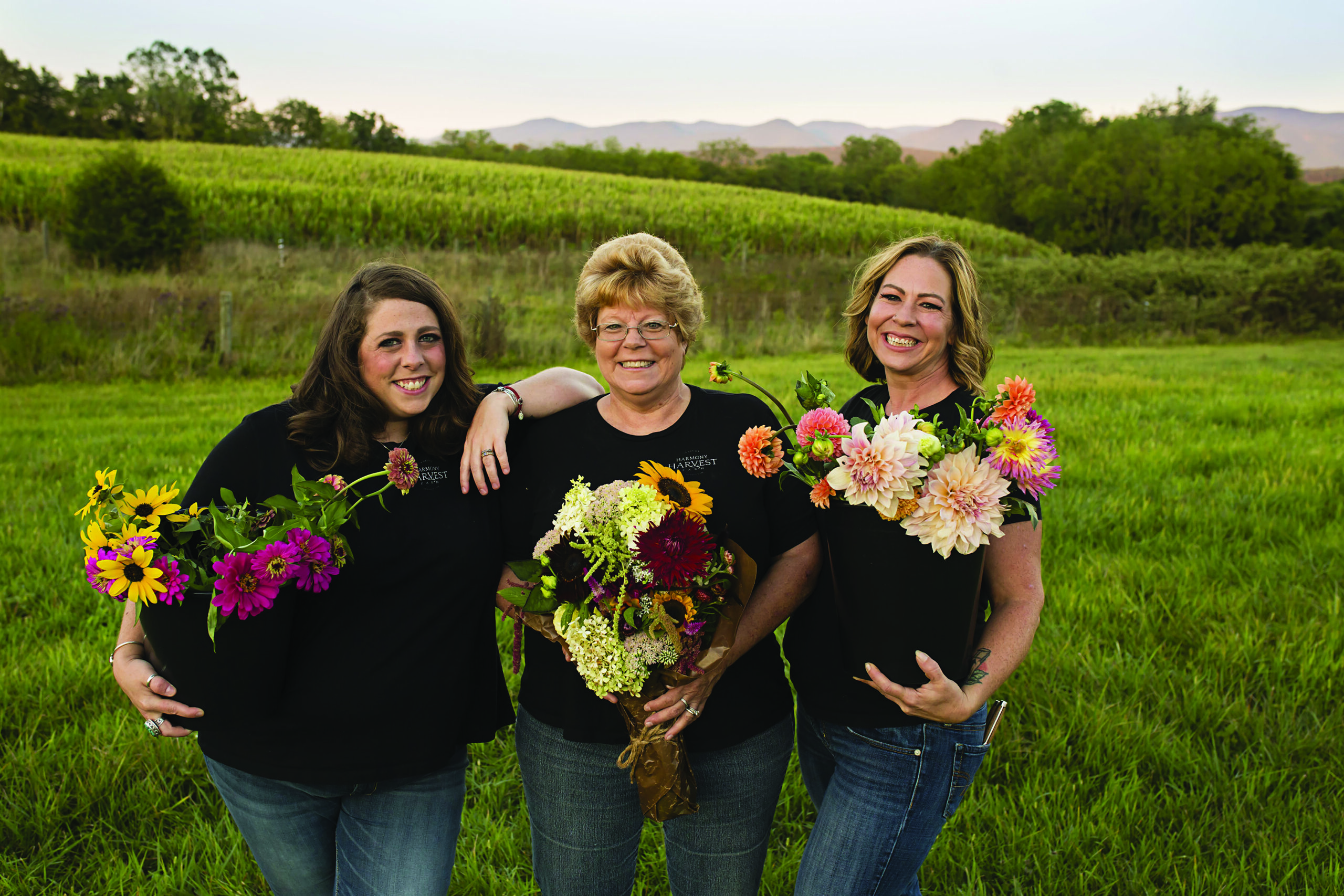 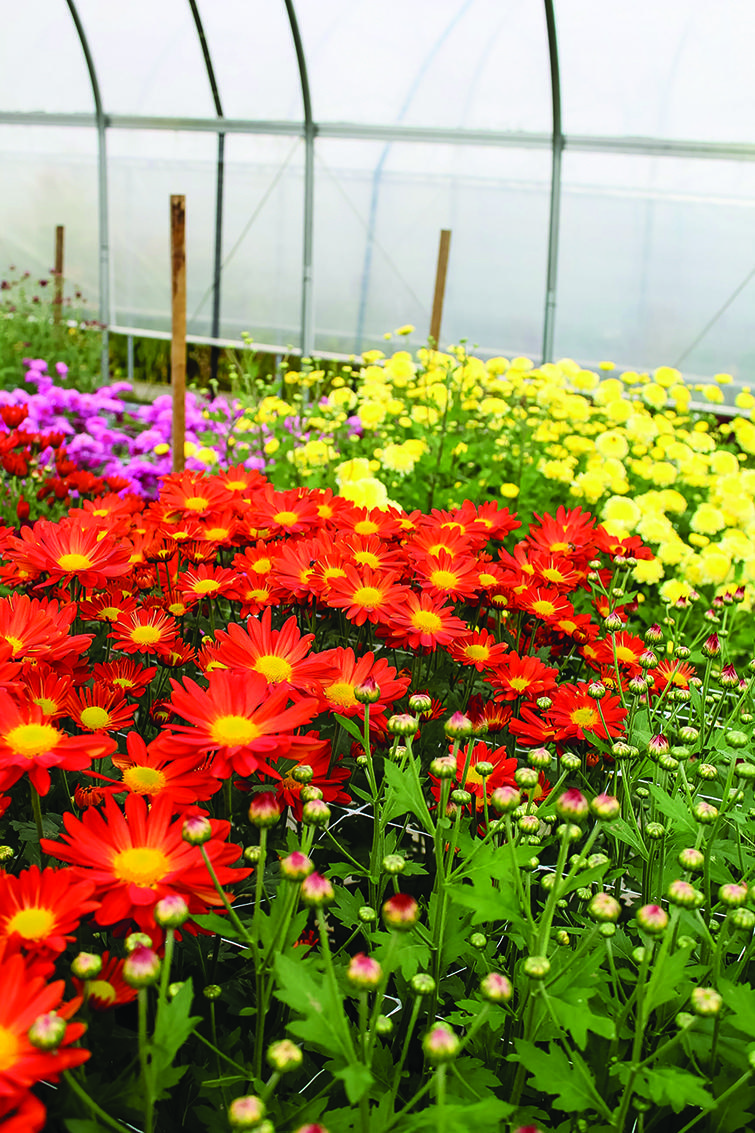 Harmony Harvest Farm’s Mum Showcase allows attendees the opportunity to see its signature mum crop during it’s prime, learn all about the growing process, and watch a demonstration by a celebrity floral designer. (Photo by Harleigh Cupp) In the top photo, From left, Stephanie Duncan, Chris Auville and Jessica Hall are the mother-and-daughters team that owns and operates Harmony Harvest Farm. (Photo by Ashley Shifflett)

WEYERS CAVE, Va. (AP) — Still low to the soil plots in late September, a collection of chrysanthemum plants in a steamy greenhouse are getting ready to produce big, bold blooms.
Harmony Harvest Flower Farm, a woman-owned cut flower farm in Weyers Cave, grows more than 200 varieties of cut flowers each year through a growing season that stretches from March to mid-November, the owners said.
Its heirloom chrysanthemums — special cultivated varieties of big, intense November blooms with names like Apricot Courtier or Primrose Tennis — are what owner and head grower Jessica Hall calls the farm’s “calling card.”
“Most people know mums like you see outside in the basket or at the pumpkin places. The ones that were in Southern Living are big,” Hall said, her kohl-lined eyes going wide.
Featured in Southern Living Magazine, Harmony Harvest Farm hosted a showcase for its signature crop on Nov. 5. The farm’s collection of flowers includes the exotic-looking heirloom chrysanthemums it’s acquired like a collection and cultivated on its own along with “patented” varieties of chrysanthemums it conducts official growing trials for.
Founded in 2011, the farm grows over 400 varieties of flowers in total on 7 acres, according to Stephanie Duncan, who owns the business with her sister, Hall, and mom, Chris Auville.
When the pandemic hit leading to the shutdown of in-person weddings and grocery stores — the business’ bread and butter at the time — Harmony Harvest Flower Farm was forced to start thinking bigger about direct-to-consumer sales, agrotourism and its mission, Hall said.
“We found our calling,” Hall said. “We started — not shipping flowers — we started shipping people’s feelings and being the connectors.”
Beckoning customers to the property, Duncan said the family-owned business decided to build a gravel parking lot and a retail shop in a barn, decorated with luxe Persian-style rugs, notecards and local gifts in addition to flowers and floral arranging tools.
Home to a Virginia Tourism Corp. LOVEworks sign, Hall and Duncan said members of the community are invited to decorate the wrought iron letters spelling “love” with cut flowers throughout the year, in addition to floral arranging workshops.
“What got us most excited about the (Southern Living) article is it says specifically `Shenandoah Valley,”’ Hall said. “Wherever we can highlight and draw and collaborate with the community to say look at this really cool story that’s located in this area.”
In addition to having its chrysanthemums featured in Southern Living, Hall said the small business was selected out of 83,000 for a national award from FedEx in 2021.
Harmony Harvest was featured on the FedEx website landing page for Mother’s Day last year.
The business has also been recognized by Lowe’s and Shopify, an e-commerce platform.
“We’re real loud girls and it’s a pretty backdrop,” Hall said.
Connecting flowers with “the local movement,” Hall said that at the time the business started, she discovered 80 percent of the flowers sold in the U.S. were imported.
“There was a real interest in people connecting through the local movement and understanding food sources and now flower sources,” Hall said. “It was an untapped market.”
Harmony Harvest Farm has one of the largest private collections of heirloom mums on the East Coast, Hall said, finding a niche by specializing in this flower and becoming a “pillar” in the mum community.
Hall, who studied a plant-related field at Virginia Tech, has been cultivating heirloom mums since the business began over a decade ago.
For the second year in a row, Harmony Harvest Farm is running national trials of patented chrysanthemums, meaning any new genetics that will be released commercially are test-grown at the farm, Hall said.
“Mums are great because you can take one plant and make tons of babies from the one,” she said. “We can do that with the heirlooms. We can’t with the patented mums.”
Hall said the farm keeps a “mom” of every variety of heirloom mum it grows.
The farm showcased the collection at the Nov. 5 Mum Showcase.
“She sticks around and every year, I snip her down and make new little babies off of that one mom,” Hall said.