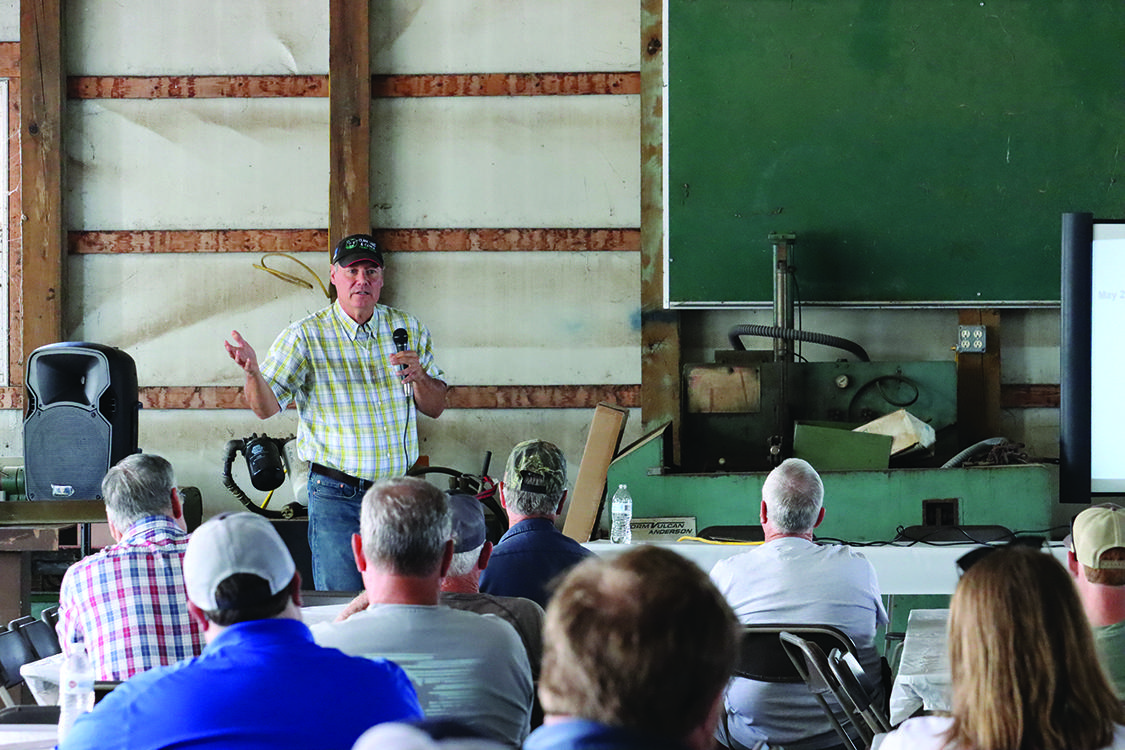 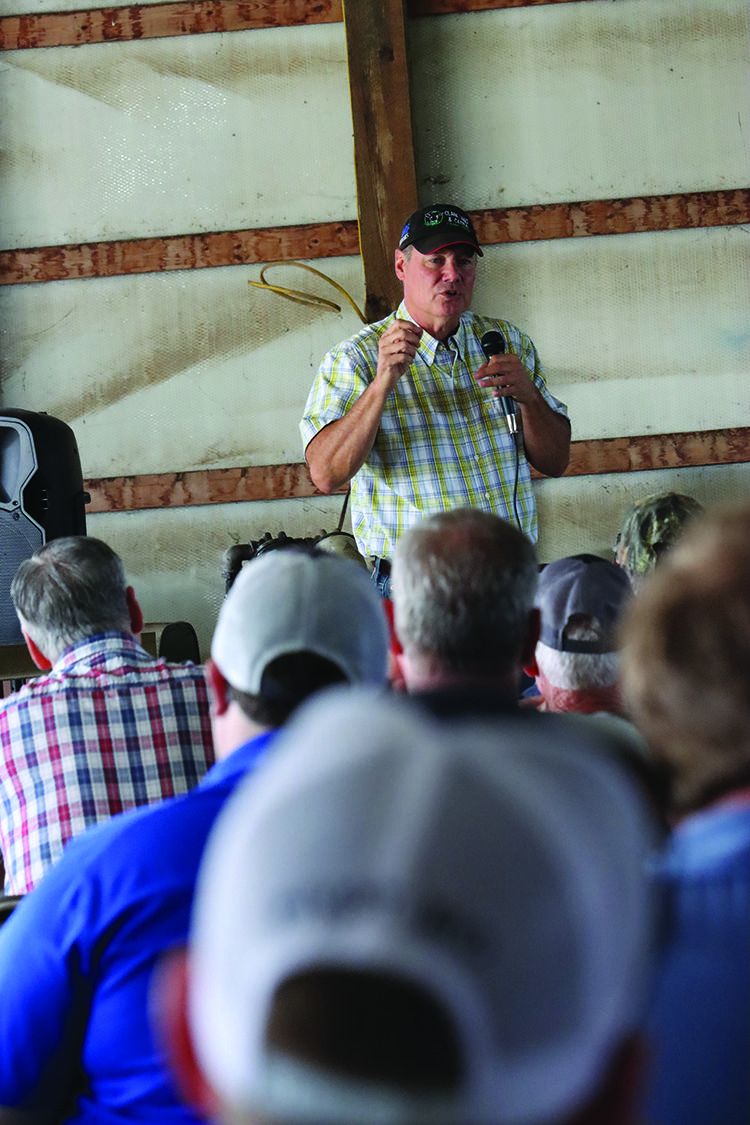 GEORGETOWN, Del. — It only took an inch of rain to get Rick Clark thinking differently.
The result was a complete overhaul of how he manages his land and crops.
Clark, a Williamsport, Ind., farmer and soil health advocate, spoke at the Sussex Conservation District’s annual field day at Baxter Farms on Aug. 16, sharing his experience and insights of shifting to a regenerative farming system.
As a fifth-generation farmer, Clark said his family had become “expert tillers,” working the ground repeatedly in preparation of planting.
“We were proud,” he said of their tradition of tillage. “If it wasn’t black, you did it again.”
But after going over a field twice one day several years ago, a one-inch rain event overnight washed topsoil out of the field covering the road.
“That’s when I woke up and said, ‘enough is enough, it’s time for a change,’” he said.
He made the change to no-till planting, and looked into cover crops and many other methods that now fall into the category of soil health management.
At first Clark said he viewed cover crops as a defensive tool, curbing soil erosion. He’s since shifted to an offensive mentality, using cover crops for weed suppression, pest management and cash crop nutrients and treating them with as much care as the cash crop.
“It’s now all about turning a defensive tool into an offensive juggernaut,” he said.
By matching specific cover crops and crop mixes to certain cash crops and timing cover crop termination to maximize biomass, Clark said he has eliminated fertilizers and pesticides from his operation.
His operation, Clark Land and Cattle, manages about 7,000 acres in Indiana and Illinois with about 5,700 acres Certified Organic.
“What we do is very drastic,” he said. “I don’t know of anyone else at this acreage scale doing what we’re doing.”
Clark rotates seven crops on his fields including livestock — grazing sheep and cattle — corn, soybeans, wheat, alfalfa, peas and sorghum. He also will leave ground fallow to “reset” when necessary, but said that acreage has been dropping.
Clark is big on biomass as a weed suppressor and nutrient generator.
He went through several slides showing the results of sequential biomass tests on cover crops and the amounts of nutrients coming from them the longer they were left to grow.
For pest management, Clark creates cover crop “cocktails” with plant exudates that minimize specific pests and suppress weed growth.
The goal is not to kill all insects and weeds but to make the field environment inhospitable for weed seed germination and pests.
Clark was quick to note that one of his six principles is knowing the context you are in.
With much different soil types, higher levels of organic matter and cation exchange capacity, his program may not all work on Delmarva but there might be pieces that farmers could add to their operation and consider doing something they haven’t done before.
“I just want to invoke the thinking process,” Clark said. “If you’re not uncomfortable about what you’re doing, you’re not trying hard enough to change. I challenge everyone here today to get a little uncomfortable. I think you’ll like how it feels.”
And Clark said not everything he tries is successful, mentioning this year planting corn into alfalfa has not gone the way he hoped so far.
“I don’t want you to think it’s all candy canes and lollipops up here. There’s lots of hardship. It takes commitment.”
Clark said he doesn’t think in terms of failure, rather in outcomes he didn’t expect and learns from it.
In 2021, the cropping plan he started with changed 37 times before the end of the season.
But he said he’s committed to not sacrificing soil health for better single season yield.
He urged farmers to start small with new practices, five or 10 acres, and evaluate before scaling up.
He also said their local network of farmers experimenting are key.
“Those are the folks you talk to,” he said. “I don’t know here how it goes.”
Clark said his next frontier in regenerative farming is continuing to reduce input costs through epigenetics, studying how off patent seed varieties adapt to his farm’s environment with the goal of growing his own seed year after year.
Starting with 100 seeds of 5 varieties, he’s increased to growing 40 acres of seed that went off patent 35 years ago.
He said he’s interested in doing the same for cover crops and his livestock herds, too.
Clark said for systems like his to get more adoption, a standard definition for regenerative farming needs to be established so it can be recognized and rewarded through the food supply chain.
“We need a definition now that everyone can agree on from the farmer to the shipper to the retailer to the consumer,” Clark said.