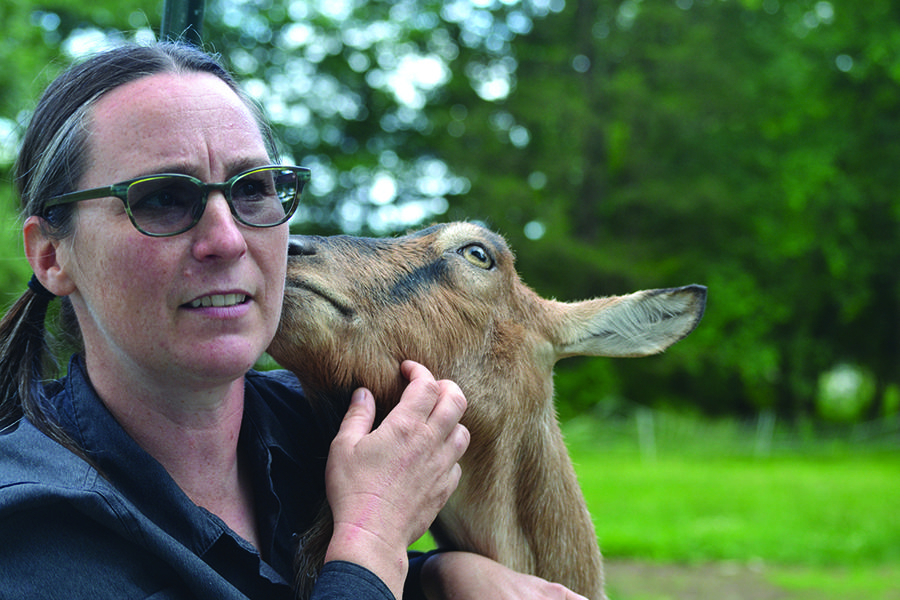 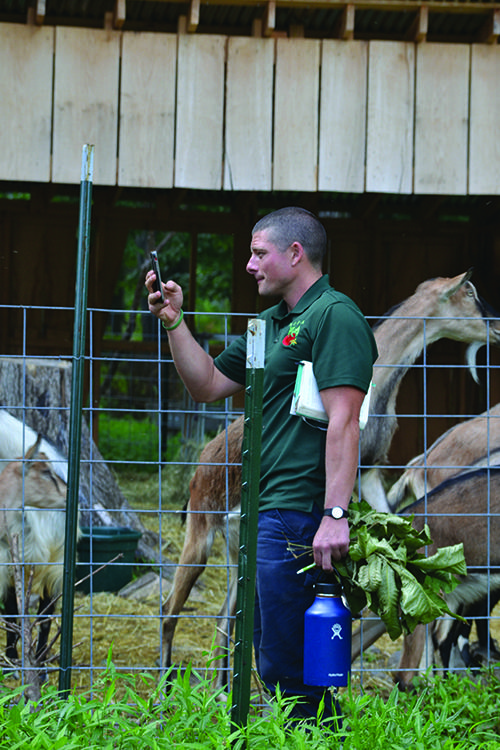 In top photo, Maria Stewart gets a kiss as she talks about her goats to a visitor. She and Matthew Kriegler own Gorgeous Goat Creamery in Hunterdon County. Devin Cornia, bottom photo, of NOFA-NJ records a video of guests feeding goats at the farm. (Photos by Jane Primerano)

KINGWOOD TOWNSHIP — Official greeter Teri takes her job seriously as she hops up on a picnic table bench and snuggles on a lap.
Teri is one of the gorgeous goats at Gorgeous Goat Creamery in Kingwood Township, Hunterdon County.
Owned and operated by Matthew Kriegler and Maria Stewart, the creamery started out as a forest management project, Stewgler Farm and Forest.
Along with the Northeast Organic Farming Association-New Jersey, Kriegler and Stewart opened the farm for a tour on Saturday, June 18.
Stewart explained the somewhat circuitous road they took to becoming dairy farmers.
They bought the property, she said, because Kriegler is a ceramics artist and she wanted a place where he could have a studio outside the house because she was “tired of clay on the light switches.”
In addition, Kriegler wants to build a wood kiln which might not be popular in suburbia. Once they found the 17-acre parcel, they started working with a USDA program funded through the NRCS to clear the understory and reinvigorate the forest.
They started out spraying Round-Up, but it didn’t take them long to realize that wasn’t the way to go. Stewart investigated renting goats, but found it would be cheaper to buy some.
Among the four goats she bought were a doe and her kid. She decided, once the kid stopped nursing, “it might be fun to make cheese.”
They are still managing the forest, with the assistance of 21 male goats who enjoy eating the invasive multiflora rose and Russian olive and even the plants that goats aren’t supposed to like such as polkweed and milkweed.
To illustrate her species’ eclectic taste, Teri attempted to eat a ball point pen.
There are 56 “gorgeous goats” total, with nine being milked right now. Of these, five are first freshers. The other four have been milking for a few years. Seven yearlings will be bred next spring.
They birth in a hoop house in a pen away from the rest of the herd.
In theory.
“The other goats get excited” and want to help, Stewart said.
She has learned goats are easy keepers. Most births are routine but there is always the possibility of problems. A breech birth took the life of one goat last year.
“We have an ultrasound machine,” Stewart said, explaining she is able to check the position of the fetus and to confirm pregnancy, if necessary.
One of her young does was displaying evidence of pregnancy after an buck, Bjorn, had made an escape which Kriegler and Stewart discovered very quickly. But not quickly enough.
Escape attempts are a hobby of the bucks. But they don’t go far. One night the farm dogs were barking insanely and Stewart looked outside to see 17 sets of eyes glowing in front of the house as if announcing how clever they were.
The hoop house is equipped with a webcam to monitor the pregnant goats and check for any problems.
Neither Kriegler nor Stewart were raised on farms. Stewart is the main farmer, Kriegler the cheesemaker. She studied online in a self-paced goat program at Langston University in Oklahoma, then attended a three-day program in Maine.
They chose Alpine goats for the heart of their herd because their height and overall size allows them to pull down branches and eat more invasives, but also have some Nigerian Dwarfs who are excellent at grazing the understory.
Alpines don’t give the most milk, but they produce the best milk for cheese. The milkers give one to 1.5 gallons per day, so the herd produces between eight and nine gallons each day. The farmers can collect milk for three days before making cheese.
Stewart is in charge of milking in a milkhouse that is actually a shipping container fitted out to milk up to five goats at a time.
She carries the milk to a bulk tank in one half of the creamery, a double shipping container, where it is piped into the cheese making room.
It takes about 45 minutes to milk the does with about 20 minutes more for clean-up, Stewart said. They are milked at 6:30 a.m. and 6:30 p.m. Precisely, if the “girls” have their way. They don’t appreciate Stewart appearing too early and disrupting their sleep and they really resent having to wait. Milkers are retired after about five years.
The bulk tank holds 30 gallons and converts to a pasturizing tank.
Theoretically, the production facility could be 40-foot containers, but the narrow dirt lanes to Goegeous Goats confined the size to 20-foot.
Matt the cheesemaker creates a very soft chev and feta which are sold at farm markets and retail outlets.
The whey is given to the pigs at nearby Haring Farms.
The cheeses are sold at the West Windsor Farmers Market, the Hunterdon Land Trust’s market at Dvoor Farm in Flemington and at Duke Farms Market in Hillsborough. Retail outlets are RSC Atelier in Stockton, The Farmers’ Table in Sergeantsville, Savour Cheese and Gourmet Foods in Lambertville and Green Grocer Food Hub in Bloomfield.
New Jersey operates under federal rules for goat milk which means many regulations and inspections, Stewart admitted.
None of that seemed to deter the visitors who came from around Central Jersey and included a restauranteur and people thinking about getting into the goat business.