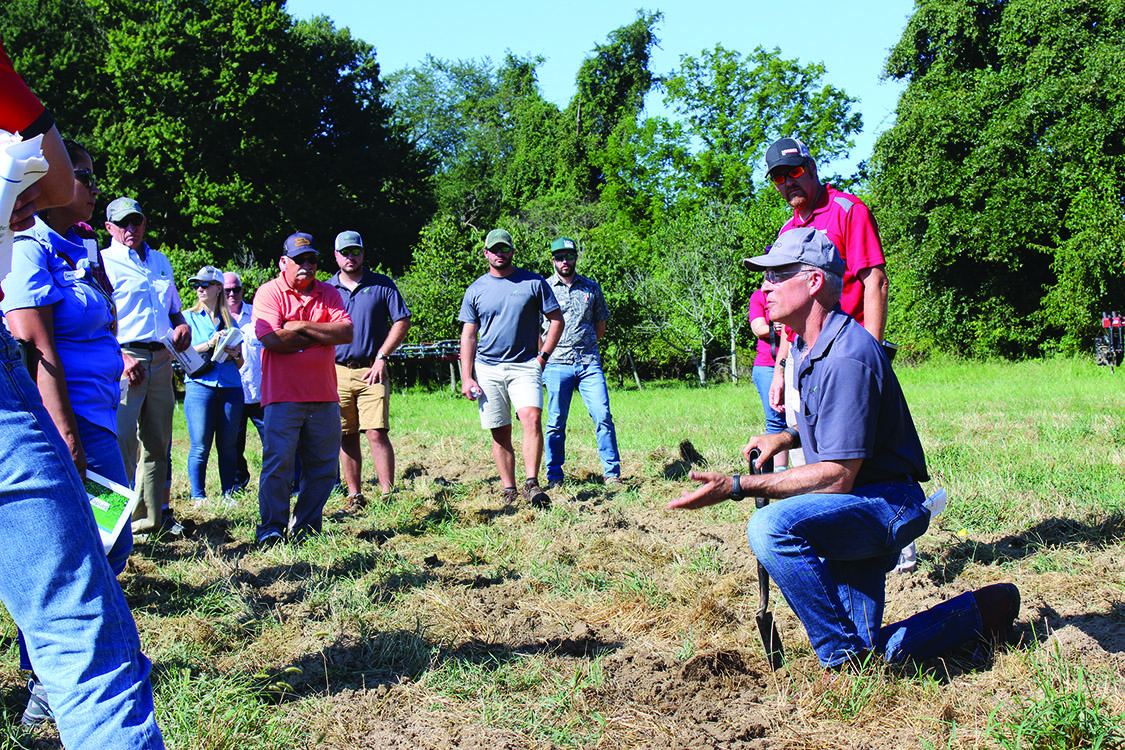 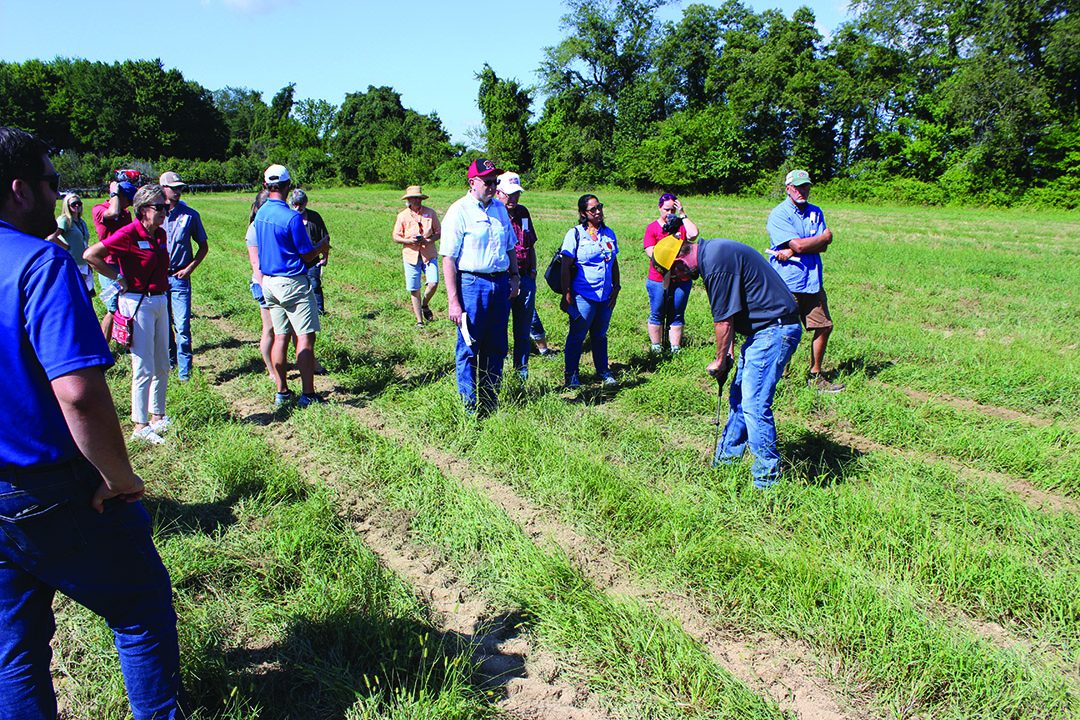 Mike Twining, top, vice president for sales and marketing at Willard Agri-Service checks the tillage depth after strip till equipment was demonstrated at the Delaware Maryland 4R Alliance held Aug. 31. Danny Beach, above, regional sales manager at Environmental Tillage Systems which manufactures the Soil Warrior strip till machine, checks the tillage depth with a soil compaction meter after a demonstration pass with the Soil Warrior. (Photos by Sean Clougherty)

QUEENSTOWN, Md. — Strip tillage systems were a focal point of the Delaware Maryland 4R Alliance field day held at the University of Maryland’s Wye Research and Education Center Aug. 31.
Strip-till is a conservation system that focuses tillage only in the rows where crops will be planted. Designed to combine the benefits of conventional tillage with the soil health aspects of no-till, strip till has gained more interest in the region from farmers, said Jenell McHenry, coordinator for the Delaware Maryland 4R Alliance.
From feedback of the alliance’s last field day, McHenry said growers were eager to learn more about the system and wanted to see the equipment in action.
“They want more information to where they can make a decision,” McHenry said. “And it fits into the 4R spectrum.”
The “4 Rs” of nutrient stewardship describes site-specific application; using the right source of nutrients at the right rate to the right place at the right time.
Field day attendees viewed two sets of equipment used in strip till; a shank-based rig developed through a partnership with Willard Agri-Service and Hoober Inc., and the Soil Warrior, a coulter-based implement manufactured by Environmental Tillage Systems.
Along with tilling the strips of land to be planted, the rigs have capability to apply variable rate fertilizer in the soil just below where the seed will be placed. Banding fertilizer in the plants’ root zone drastically increases soil nutrient concentration where it will be used by the plant, said Mike Twining, vice president for sales and marketing at Willard. For immobile nutrients phosphorus and potassium, concentration in the root zone means it will have a better chance of finding the roots over broadcast and surface banding applications.
“A bigger root system does all kinds of things,” Twining said, noting better nutrient uptake and plant stand ability as two benefits.
Drawing from 12 years of work partnering with Hoober to facilitate strip tillage on area farms and compiling massive amounts of data, Twining said the indexed yield average for irrigated corn over 10 crop years is averaging about 25 bushels per acre or more compared to other tillage systems.
Of that advantage, he attributed 10 bushels to banded placement of fertilizer and 15 bushels to the strip tillage practice.
“We’ve learned a lot through that process,” Twining said. “We haven’t seen anybody go away from strip till that’s gone into it.”
Most growers using the system are still coming back through with a sidedress application, Twining said.
Banded applications alone have shown to help yields across planting systems. A summary of multi-year, multi-state banding trials shows a 7.65 bushel per acre increase in corn and more local studies by Willard show a 2.7 bushel per acre increase in soybean yield, Twining said.
He said adding strip tillage as a management practice further aids the delivery of crop nutrients.
Better fertility management is also key as plant populations steadily increase. With more plants in the field, the individual root systems get smaller, and having the nutrients applied as close to the root zone as possible aids plant health and nutrient use efficiency, Twining said.
Twining added he has always seen at least an additional 1,000 plants per acre in strip till systems compared to no-till where more seed has good soil contact to germinate.
“There’s just a physiological aspect to the strip till environment that’s really hard to duplicate in other environments,” he said.
Demonstrating the Soil Warrior, ETS regional sales manager Danny Beach said the implement has a shallow setting tilling about 6-8 inches into the ground and a deep setting going about 10-12 inches. It has variable rate capability for dry and liquid fertilizer application.
Coming from Western New York where drought has set in, Beach said it’s become easy to tell which fields were strip tilled versus fields in another system. The strip tilled fields looked much healthier.
“It’s pretty amazing, pretty telling where it’s been so dry,” he said.
The cost of the equipment is likely the biggest factor in moving to a strip till system. Horsepower needs and fuel usage are also considerations, the sales reps said.
Twining added soil compaction can come into play in fields that are worked before the ground is fit, although that’s a consequence of any tillage system.
“The same rules apply,” he said.