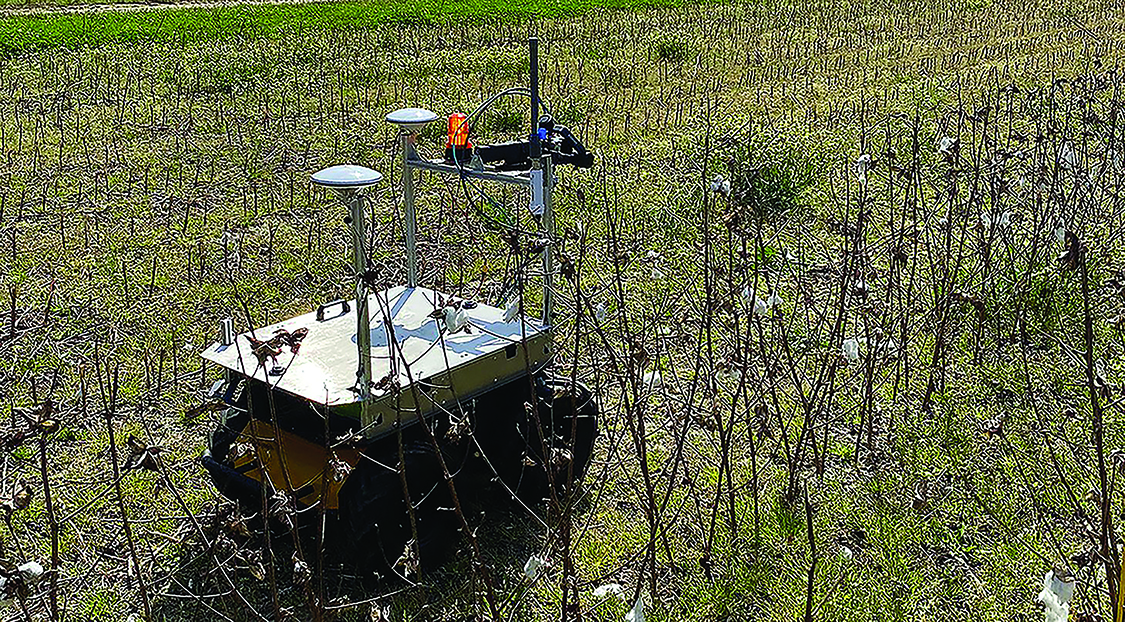 CLEMSON, S.C. — Two Clemson University students have developed a machine they say can minimize crop waste during harvest and help farmers save money.
The GPS-guided, unmanned ground vehicle, Agrus, was developed as an entry into the third annual SICK TiM$10K Challenge.
Contest entries were judged based on creativity and innovation, ability to solve a customer problem, commercial potential to produce and market the application, team entrepreneurship and reporting.
The Clemson entry was developed by students Megan Io Ariadne “Mia” Abenina and Jake Menloe.
Composed of two main components, a SICK TiM781 LiDAR sensor and a Husky UGV from Clearpath Robotics, Agrus travels down crop rows taking reliable and autonomous measurements of plant density and volume.
It also records two-dimensional scans of surrounding crops.
“The Agrus UGV scans a field multiple times before harvest to inform farmers of missing or underperforming crops so they can replace the crops or provide an intervention such as apply nutrients as needed,” said Abenina, a master’s degree student in Plant and Environmental Sciences from the Philippines. “This technology is beneficial to owners of small farms because it saves time and money and allows the farmers to work on areas that require attention.”
Regularly monitoring crops is key to finding problems early. For example, crop monitoring is important to prevent the spread of pests, as well as diseases.
Early detection can help farmers address problems before they become major issues. Interventions are more effective when problems are confined to one small area, Abenina said.
The Agrus system travels down crop rows measuring plant density and volume to minimize crop waste and save farmers money.
“During our study, Agrus performed more like a scout, reporting if something was missing in a field or providing crop profiles such as, the height of some of the plants may be smaller than the rest of the crop in the field,” she said. “Waste is the ultimate result if a farmer does not maintain a crop as it grows. Precision farming, such as the Agrus technology, can help optimize efforts, properly utilize resources, as well as reduce consumption and waste, as well as reduce labor costs.”
The students work under the guidance of Joe Mari Maja, an assistant professor and research sensor engineer housed at the Edisto Research and Education Center in Blackville, S.C..
Sophisticated technologies such as robots, temperature and moisture sensors, aerial images and GPS technology routinely are used in today’s agriculture. These devices and precision agriculture and robotic systems allow farms to be more profitable, efficient, safer and more environmentally friendly. But they are expensive.
Average cost for a UGV used for research is $22,000. To lessen up-front costs, the Agrus systems model is designed as a subscription-based service, allowing farmers to benefit from the system without having to purchase a UGV.
Based on a monthly operational cost of $3,000, the estimated total cost per day of operation would be $75.
Because this is a service company that focuses on what customers need and want, the students designed the system so that customers decide how many acres they want scanned.
“This will be the determining factor in the total amount to be charged,” Maja said. “The total amount of time to scan an acre of crops takes 30 minutes. During an 8-hour workday, the system can scan 14 acres. The daily earnings should be at $110 if we want to see a Return on Investment in a year.
“So, scanning an acre of crops would cost roughly around $7 to $10 to achieve the daily target earnings.”
The researchers believe farmers using a service such as this will have the knowledge to better price their crops and forecast for the following year.
“In addition to being expensive, there is a steep learning curve associated with UGVs and the technology that comes with them,” Abenina said. “We want this to be a service farmers don’t have to spend a lot of time learning so they can focus on what they do best – farming – and someone else will take care of the scanning.”
Abenina said they named their project “Agrus” – a combination of “agriculture” and “us” – because they believe “everyone has a role in contributing to development of the farming industry so that everyone receives the opportunities agriculture affords.”
“We were very pleased to have been interviewed for our entry in this competition and to have our project featured on the company’s blog,” Abenina said.
Because Menloe has graduated and Abenina expects to graduate in 2022, Maja said he will continue working with a new team of students to enhance the Agrus system. He plans to resubmit it for the next SICK USA competition in 2023.
Maja said if the Clemson team wins the grand prize of $10,000, the money will be used to further business and economics studies for the project. SICK is a sensor intelligence company.
A majority of United States farms are small farms that are family-owned and operated. The United States Department of Agriculture’s National Institute of Food and Agriculture (USDA-NIFA) reports more than 90% of farms in the United States are classified as small, with a gross cash farm income of $250,000, or less.