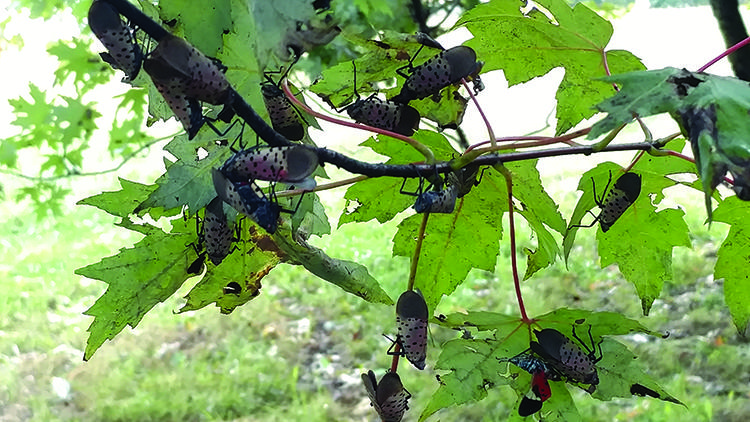 UNIVERSITY PARK, Pa. — Short-term, heavy feeding by adult spotted lanternflies on young maple trees inhibits photosynthesis, potentially impairing the tree’s growth by up to 50 percent, according to a new study by Penn State scientists.
According to the researchers, the findings can help production nurseries and forest managers make management decisions to protect their inventories.
“Spotted lanternfly will feed on important ornamental and forest trees such as silver and red maple, which are used to make products and are abundant across urban, suburban and rural landscapes throughout Pennsylvania,” said Kelli Hoover, professor of entomology in the College of Agricultural Sciences, who added that Pennsylvania’s forest products industry has a total economic impact of $36 billion.
This planthopper, which originated in Asia, was found for the first time in the United States in Berks County in 2014 and since has spread to 45 Pennsylvania counties and surrounding states. The pest uses its piercing-sucking mouthparts to feed on sap from more than 100 plant species, with a strong preference for tree-of-heaven — also an invasive species — and wild and cultivated grapes.
“While the spotted lanternfly likely co-evolved with its preferred host, tree-of-heaven, in its native range, the effects on the health and physiology of tree hosts native to the U.S. have not been investigated,” Hoover said.
The scientists began their two-year study in 2019 in a common garden area in Blandon. They collected spotted lanternflies at two ages: adults and fourth instar nymphs, the last stage of development before adulthood.
The researchers then placed the insects in different “densities” — or number of insects per plant — on silver maple, red maple, black walnut and tree-of-heaven saplings.
During the first year, they looked at how feeding pressure on a single branch affected tree physiology. In the second year of the study, when the trees were more established, the team investigated the effect of nymph and adult feeding using whole-tree enclosures.
The scientists defined heavy feeding as when the number of pests blanketed the tree.
They evaluated how insect density by life stage influenced physiological plant responses, most notably gas exchange attributes, which include photosynthesis — the process of converting carbon dioxide and water into oxygen and sugar. Sugars are used as food by the plant.
“This process produces the nonstructural carbohydrates that trees need to grow and produce flowers or fruit,” Hoover said. “When plants are under stress, they use a variety of strategies to defend themselves; they may shift rates of photosynthesis and alter the allocation of carbon and nitrogen resources to growth or induced plant defenses.”
The team’s findings, recently published in Frontiers of Insect Science, show that adult spotted lanternfly feeding does thwart photosynthesis, thereby stunting the growth of young saplings. However, there was variation depending on tree species, pest density and time post-infestation.
The researchers found that nymphs on a single branch of red maple or silver maple at different densities had no significant effects on gas exchange
In contrast, 40 adults confined to a single branch of red or silver maple rapidly suppressed photosynthesis and reduced nitrogen concentration in leaves. Soluble sugars in branch wood were reduced in the fall for silver maple and in the following spring for red maple.
Silver maples exposed to nymphs in whole tree enclosures showed significantly stunted diameter growth during the next growing season, and the decline was proportional to spotted lanternfly density (0, 40, 80 or 120 insects per tree). Compared to controls with no lanternflies, treatments with the highest spotted lanternfly density (120) reduced diameter growth by 55%, and moderate (80) and low (40) densities caused 42% and 38% reductions, respectively.
In contrast, instars in whole tree enclosures had no effects on black walnut. Spotted lanternflies enclosed on tree-of-heaven at a density of 80 adults per tree suppressed photosynthesis after two weeks of feeding. Still, it did not alter nonstructural carbohydrates, nitrogen concentrations or tree growth.
The scientists also noted that each year, spotted lanternfly adults feed heavily on maples in mid- to late-September — when tree-of-heaven begins to go dormant — and this lasts until the pest dies from a hard frost. As a result, they said, it is important for production nurseries, forest managers and homeowners to monitor and protect maple and black walnut saplings during that time. Hoover pointed to the Penn State Extension spotted lanternfly website, https://extension.psu.edu/spotted-lanternfly-management-guide, for management options.
“The bottom line is that the older the insects, the more damaging they are,” she said. “If spotted lanternfly is feeding on your rosebush, especially the nymphs, or if they are confined to the underside of the leaves of your maple trees, they’re probably not going to do much harm. But, when they are blanketing young trees, treatment with biopesticides or insecticides might be needed.”
Penn State scientists are examining spotted lanternfly feeding on other species, including weeping willow and river birch, and the impact on more-established trees. “If trees are stressed, we cannot rule out that even larger trees may suffer reduced health and growth given that no long-term studies have been done on mature trees in response to spotted lanternfly feeding,” Hoover said.