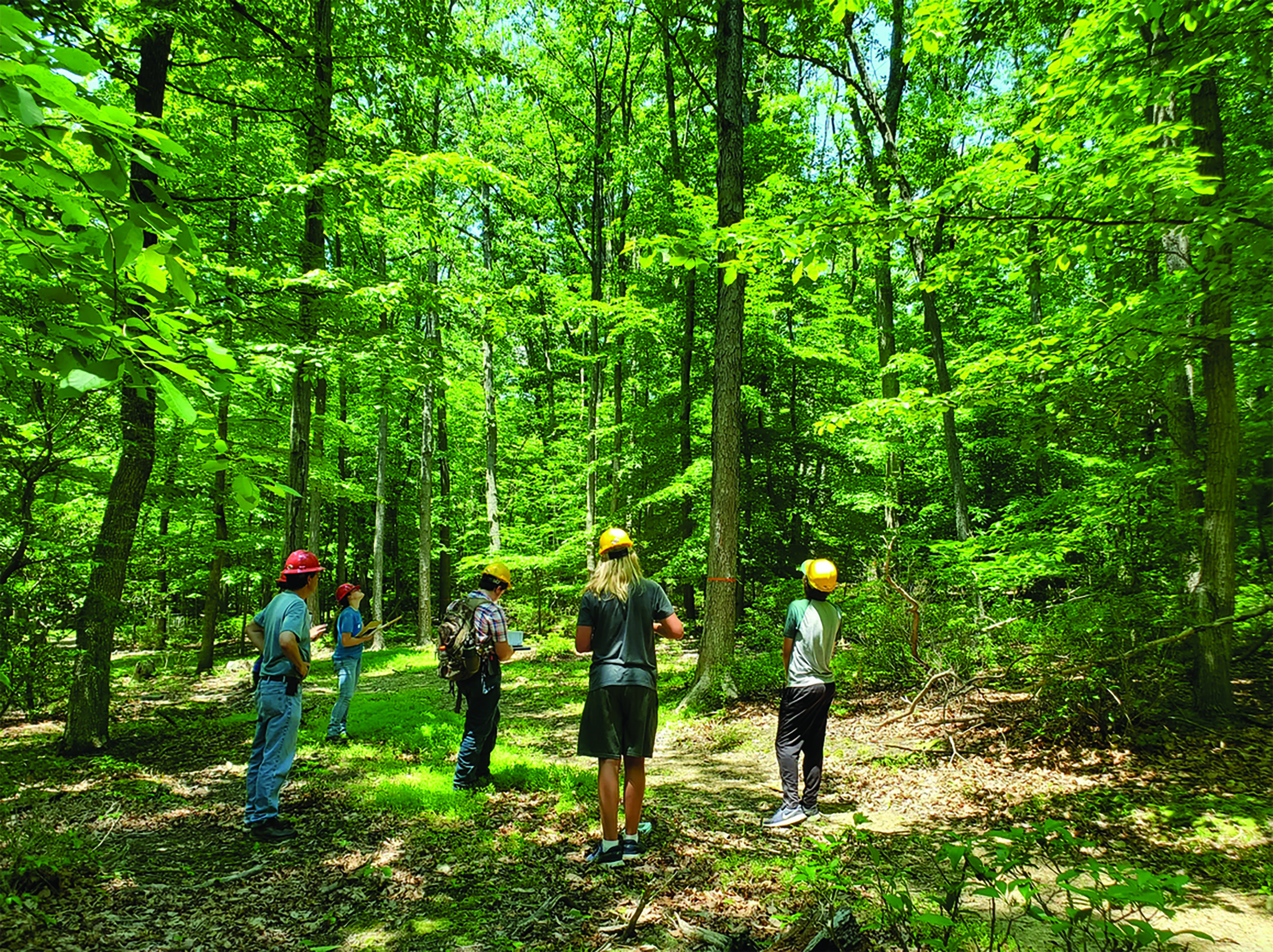 Students in a 4H forestry program compete in a recent Maryland competition. A consultancy has produced a report recommending immediate changes to boost the state’s lagging forest products industry, which contributes nearly $4 billion to the state economy each year. (Photo courtesy Agnes Kedmenecz)

ANNAPOLIS, Md. — A recent state-funded analysis of Maryland’s forest products industry recommended a long list of immediate actions both the state and the industry can take to revive the weakened agricultural sector.

A summary of the report suggests that the state government ease regulations that would benefit the forest products industry, that the industry become more coordinated up and down the supply chain, and that the state and outside organizations help Maryland’s industry with grants and new funding.

“A lot of people have come together on this,” said Jonathan Kays, a University of Maryland Extension forestry specialist. “If [the forest products industry is] a priority of the [state’s] administration and its agencies then things tend to happen. In the past, forestry, I think, has not been seen as a priority.”

The state announced a grant award of more than $150,000 in early 2020 to develop a comprehensive plan — known as an economic adjustment strategy — for the forest products industry, which has struggled in recent years with mill closures such as the 131-year-old Verso paper facility in Allegany County in 2019. Though Maryland’s industry is considered tiny, it remains significant. In 2016, the industry contributed nearly $4 billion to the economy and employed more than 16,000 people, the report said.

“Moving forward, Maryland has the opportunity to leverage its human capital, infrastructure, logistics networks, R&D capabilities and entrepreneurs to turn the corner on a declining industry,” the report said. “However, it will require a concerted and coordinated effort to overcome institutional, economic, industry, social and regulatory barriers to progress.”

The summary breaks down the state’s industry by region and prioritized several overarching goals, including providing support to entrepreneurs, raising public awareness about the forest products industry and growing local and international market opportunities. More than 50 actions were recommended to state agencies, industry groups and others. Among the report’s recommendations for “immediate” action:

• Develop a state thermal renewable energy credit for energy produced from the burning of woody biomass;
• Update the state’s legal definition of qualifying biomass to include all wood and wood residues;
• Create a state purchasing preference for Maryland products, modeled after the “Farm to Institution Bill” passed by the legislature;
• Shift the state’s Green Building standards to favor local wood products.

Many of the recommendations deal with communication between state agencies, legislators and industry representatives. (One of the recommendations suggested creating an informal “Timber Caucus” of legislators. Another suggested more policy tours for them, already common in other agricultural sectors.) The study also recommends industry groups and businesses use local, state and federal grant funding and other financial support to pay for many of these initiatives. USDA grants, for instance, could be used to fund research in wood products and renewable energy. They could also create research and development teams partnered with research institutions and federal labs.

The report also recommended more collaboration between the industry and the state. That includes an improved permitting process for loggers, more access to state forestland and establishing formal and regular communication between state forest managers and the local industry.

To accomplish much of this, Kays said the industry would also need to change perceptions particularly in the environmental lobby. Forest management and the preservation of forestland — which could be sold for development without the revenue from forestry and logging — are critical to the health of the Chesapeake Bay, a bipartisan priority. Well-managed forests act as a sponge and filter and consume enormous quantities of rainwater that would otherwise flow into the bay, increasing nutrient levels and threatening marine life.

Environmentalists “don’t necessarily want to encourage [the forest products industry] because they don’t like the cutting of trees,” he said. “If that attitude can change, I think we’ve accomplished something.”

The state is also undergoing a comprehensive review of all state buildings that could feasibly adopt wood energy plants. Forestry advocates hope that the state builds some of those plants, which would encourage businesses in the state to do the same.

“If the state is not invested [in wood energy], why should business?” Kays said.

The report noted that no state agency is required to take action on any of the recommendations and “there is currently no entity stepping forward to take up the mantle.” A Maryland Department of Natural Resources spokesman referred The Delmarva Farmer to the report’s authors, ACDS LLC, a consultancy in Columbia, Md. They could not be immediately reached for comment.

A copy of the summary can be found on the website of the Maryland Forests Association at https://www.mdforests.org/marylands-forests.

CORRECTION: The last name of Jonathan Kays, a University of Maryland Extension forestry specialist, was misspelled several times. The errors have been corrected.