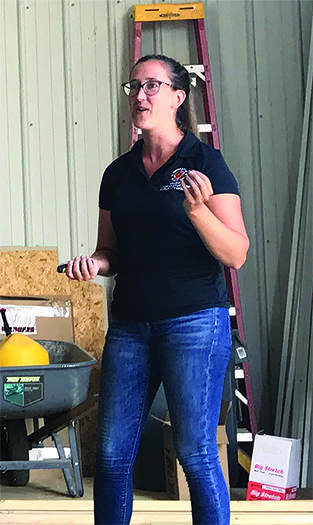 Amanda Grev, a University of Maryland Extension forage and pasture specialist, briefs farmers about an ongoing study regarding the effect of soil fertility on triticale yield and quality at the Extension’s Dairy Field Day in Clarksville on July 13. (Photo by Jonathan Cribbs)

CLARKSVILLE, Md. — Boosted nitrogen rates did not significantly improve triticale yields during a University of Maryland Extension study earlier this year, but it did improve crude protein.

The Extension released preliminary data this month from an ongoing study regarding the effect of soil fertility on triticale yield and quality. Agents conducted the study at two locations — the Extension’s Clarksville and Keedysville research facilities — piggybacking on recent triticale research by Cornell University.

The results from Cornell and Maryland suggest that extra nitrogen could be a good strategy for boosting protein in that forage, said Dr. Amanda Grev, an Extension forage and pasture specialist, during the Extension’s Dairy Field Day on July 13. Grev referred to the Cornell research before introducing Maryland’s results.

“The additional cost of that extra nitrogen (at Cornell) was around $60 per acre, but if they were to supply that same amount of protein through an alternative source, like soybean meal, they’d be spending upwards of $200 based roughly on current prices,” she said. “So you’re basically looking at a three-and-a-half-times return for the investment of that additional nitrogen.”

The Maryland triticale, which was harvested in late April, was planted in eight different plots at both locations with varying rates of nitrogen and sulfur. Nitrogen rates rose from 0 to 150 pounds per acre with alternating sulfur rates of 0 and 15 pounds per acre. Grev recommended planting winter forages one and a half to two weeks ahead of wheat for grain, which will give the crop more time to generate tillers in the fall — to increase yield potential — and capitalize on remaining nitrogen from the previous crop. (Cornell’s research showed that early planting boosted yields 35 percent.)

Also, if no manure was applied in fall, make sure there is sufficient sulfur — about 1 pound for every 10 pounds of nitrogen — to add in the spring.

In both locations, added nitrogen boosted yields above controls that were not treated with nitrogen or sulfur, but increasing the nitrogen rate did not significantly improve yields, Grev said. The average yield across all fertility treatments at the Central Maryland Research & Education Center in Clarksville was two tons per acre, and the average at the Western Maryland Research & Education Center in Keedysville was 2.7 tons per acre. Crude protein, however, rose with the nitrogen. At both locations, crude protein in controls at both locations was about 8 percent, but when the nitrogen rate rose to 150, the crude protein topped out at more than 18 percent.

“This was kind of cool to see because it matches very well with what they were seeing in New York,” Grev said.

Neutral detergent fiber and total digestible nutrient levels did not change significantly across the treatments.

Jeff Semler, Extension agent for Washington County, performed soil nitrate tests due to concerns that high nitrogen levels could lead to nitrate pollution. Samples were taken at both locations before and after fertilizer application, which occurred in March. The data still needs to be analyzed, but he said the results were encouraging.

“There’s a negligible amount of nitrogen in there regardless of treatment,” he said.

The research leads into a dairy cow feeding study set to begin next month, he said. The study will analyze triticale silage and its effect on feed intake, bodyweight, milk production and milk components. The work could be useful to farmers struggling to dairy farm in the state, he said.

“The name of the game is always to make the cheapest milk that we can and to make as many tons of forage as we can off of each acre we farm. In Washington County, we’re so strapped for land we started knocking rocks out,” he said. “We’re very cognizant that our dairy farmers have to make maximum tonnage per acre.”