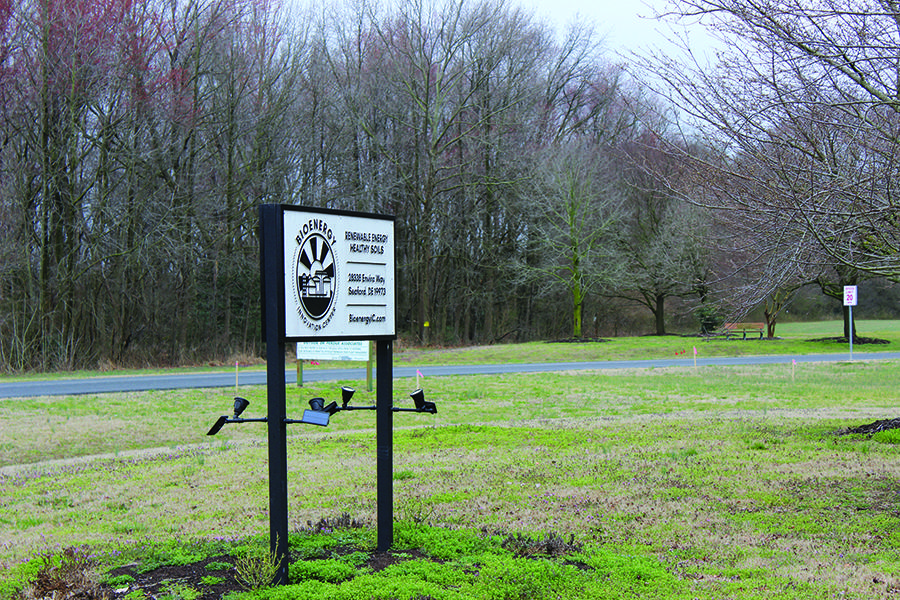 BioEnergy DevCo announced in 2019 it had purchased the former Perdue AgriRecycle facility and property with plans to build a digester. (Photo by Sean Clougherty)

GEORGETOWN, Del. — After an hours-long hearing March 16 for a company seeking to install an anaerobic digester near Seaford powered by poultry industry waste, the Sussex County Council voted to delay a decision on the matter.
The request for a revised conditional use permit to build the digester facility was approved with conditions by the county’s planning and zoning commission on March 11. The company, BioEnergy DevCo, announced in 2019 it had purchased the former Perdue AgriRecycle facility and property with plans to build a digester.
If approved, BioEnergy would construct four digester tanks, three holding tanks and a water treatment system on a 228-acre property now operating as a compost facility, according to Peter Ettinger, the BioEnergy chief development officer.
Using poultry waste as a feedstock, the digester would produce methane gas, which will be cleaned and marketed through Chesapeake Utilities as natural gas, and a nutrient rich compost byproduct.
Ettinger said the company operates 220 digesters worldwide including one at the Maryland Food Center Authority in Jessup, Md.
“You typically would see this in a wastewater treatment plant in the United States but now it’s expanding to companies who have a lot of waste and are looking for alternatives,” he said.
As proposed, the Sussex County digester facility would handle about 220,000 tons of poultry waste per year, mainly using processing residuals called dissolved air flotation or DAF.
Ettinger said 65 to 70 percent of the digestate produced is expected to leave Delmarva as a marketable soil amendment but the product is also being researched as an option for poultry house bedding.
Excess wastewater will be trucked to wastewater treatment plant but the company has had preliminary talks with county officials to connect to a sewer line and reduce truck traffic.
BioEnergy officials said the facility would not handle hazardous materials and has multiple redundancies built in for safety.
The risk of major spills is low but they have clean-up plans in place if it does happen, Ettinger said.
“Our biggest safety issue is someone hit themselves with a hammer,” Ettinger said. “In our history, we have never ruptured a tank. We’ve never broken a tank.”
Christine McKiernan, BioEnergy managing director, added digesters operate at relatively low pressure.
“Properly designed, the things you’ve heard described as catastrophic don’t happen,” she told the council. “If you do this for a long enough time, you have to respect working with methane.”
Jeff Bross, senior consultant for engineering firm Duffield Associates, said with trres planted and landscaping added, the facility will be “virtually invisible to passing cars” and traffic to the pelletizing plant “almost identical” to what anaerobic digester will produce.
He said the facility plan has been reviewed by Delaware Department of Transportation, Soil Conservation District, Blades Volunteer Fire Department, Delaware State Fire Marshall, and multiple divisions at the Department of Natural Resources and Environmental Control.
At the hearing, citizen and environmental groups offered both support and criticism of the project.
Carol Donahue said the project received unanimous support from the board of the Friends of the Nanticoke River. She said the digester is an appealing alternative to land application of DAF.
“From our perspective, from an environmental perspective, the disposal of DAF waste is often more challenging,” Donahue said.
The Wicomico Environmental Trust and Center for Inland bays also pledged support provided the facility is managed properly.
Keith Steck, vice president of the Delaware Coalition for Open Government said, the facility will be bringing in poultry waste from Maryland and Virginia when Delaware already has more than it can handle.
“This project will concentrate the problem in Sussex County and Seaford,” he said.
The project needs more scrutiny, he added, including a Preliminary Land Use Service review form the Department of Planning.
“I think it’s a worthwhile exercise so you understand what the deficiencies may be,” he said.
Representatives from Food and Water Watch said the facility will increase the consolidation of poultry farms and would amount to a gas refinery on land zoned for agriculture.
“This is a heavy industry and it does bring with it public hazards,” said staff attorney Tyler Lobdell.
Lobdell and others arguing against the council granting the facility a permit, said descriptions of the plant have been misleading, first focusing on using poultry litter as a main feedstock and then switching to DAF, and how the wastewater and digestate will be managed is still unclear.
“We’re not getting rid of it, we’re bringing in other state’s waste,” said Maria Payan, consultant for Socially Responsible Agricultural Project. “It’s just not feasible.”
The next Sussex County Council meeting is scheduled for Tuesday, April 13 at 10 a.m., but an agenda had not been posted on the council website.