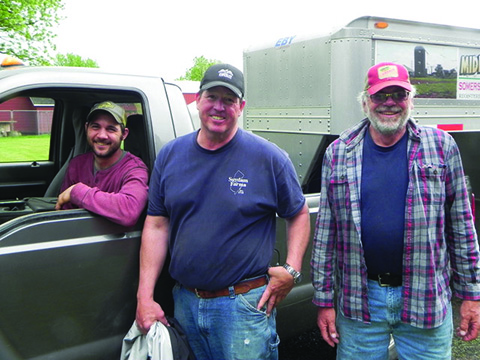 From left, Matt Puskas, farmer and NJFB President Ryck Suydam and dairy farmer Bob Puskas are all smiles after four cows Suydam purchased for finishing were safely transported to his 6-acre pasture. (Photo by Richard Skelly)

FRANKLIN TOWNSHIP — As with many farmers selling retail, New Jersey Farm Bureau President Ryck Suydam keeps making changes to draw customers to his family’s farm market.
He purchased his first beef cattle in 2012 to finish on his family’s farm.
Suydam Farms at Route 27 and Bennett’s Lane in the Somerset section of Franklin Township has been here since 1713.
Suydam and his crew sell vegetable seedlings, vegetables at his spacious farm store, but they also sell several value-added items like tomato sauce, tomato juices, strawberries, blueberries, iced tea, jars of pickled and processed vegetables, pasta and pork. So adding beef to the lineup was the next step.
“People were coming to my store and buying eggs and pork and I just wanted to capitalize further on it,” Suydam said. He added keeping the herd pasture-based works in well with his other duties on the farm and at Farm Bureau.
Suydam worked with his neighbor and friend, Bob Puskas, a dairy farmer who spent years involved with many civic-related duties in Franklin Township. Puskas’ farm on Middlebush Road is the last dairy in Somerset County.
“When I grew up here it was a dairy farm and we did some beef, so I’ve been around cows all my life.”
Suydam gets feeder calves from John Yablonski who has a cow-calf operation in Hillsborough, he said, and works with his neighbor and friend, Bob Puskas, who owns the last dairy farm in Somerset County.
On the Saturday of Memorial Day Weekend- working with Puskas and Puskas’ nephew Matt — he coordinated the arrival of four new beef cows for finishing. To keep all the work manageable, looking after more than 300 acres, Suydam Farms’ store is open weekend days only from 8 a.m. to 5 p.m.
“We have some dairy cows here, heifers, young females, they actually belong to the Puskas Family, they’re here to chew down some of my pasture,” Suydam said. “But the four new arrivals we just unloaded from the trailers are a couple of Red Angus and Herefords. They’ll be processed later in the summer or early fall,” he said. The Memorial Day Weekend arrivals bring his herd size up to nine.
Each cow weighs about 600 pounds, so getting the animals out of trailer and into the pasture safely without injuries to the farmer is something he leans on Puskas and his nephew to do.
“They often get a little spooked riding in the trailer, so since the Puskas’ handle them a lot more than I do, they do a great job of separating one from the other and letting them out.”
Once the cows get familiar with each other, Suydam said he will combine them into one bigger fenced-in pasture.
“You’ve got to be vigilant and wary about the cows getting out,” Suydam said. “They get out of the pasture, that’s why we maintain and inspect the fencing all the time.”
Suydam’s cattle will be processed mainly into steaks and burgers which he and his crew will sell this summer and fall at the retail stand. Suydam’s burgers are particularly distinctive and flavor-filled because they’re not all chuck meat.
“Getting into the retail part of it was new to me, because there are 50-odd different cuts you can get out of an animal,” he explained, working with a slaughterhouse in Bucks County – where he already has booked time for the animals’ processing this August and September – he’ll select a certain number of steaks he wants.
“I’ll still do the porterhouse, the sirloins, the T-bones and prime ribs and I’ll probably put everything else into the burgers,” he said, “that way it makes for a tastier mix.”
Asked about expanding his herd size in coming years, Suydam said given his responsibilities as president of New Jersey Farm Bureau, that may eventually happen some years from now.
“Most of my ground is not fenced, and I’m not in a hurry to spend more money on fencing,” he said, noting his primary business is hay and straw for the state’s horse industry.
“I have another career with Farm Bureau, especially now with the pandemic, I’m actually working harder than I was before,” he said.
“Two of cows will go at the end of August and the other two will go at the end of September and I had to make those appointments with the slaughterhouse now, it’s difficult with the virus around, processing them is more involved and you have to book your appointments for slaughter now.”