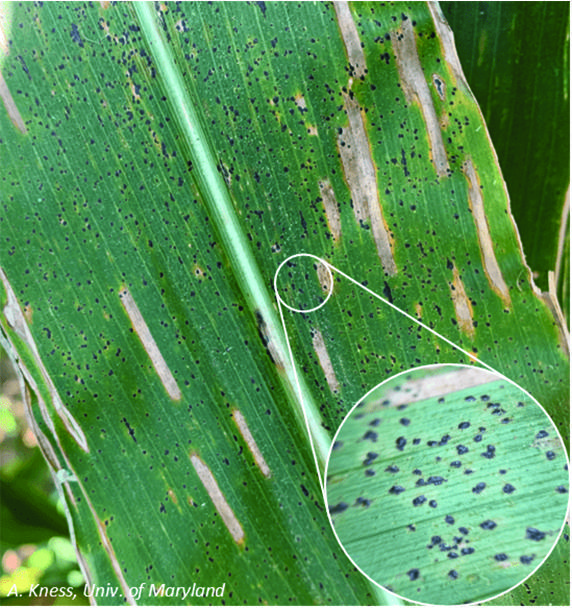 On corn plants, tar spot presents as raised lesions that may look like black paint flecked onto the leaves only these marks don’t wash or scrape off of the leaf. (Photo courtesy Andrew Kness)

Tar spot, a foliar disease on corn found in Pennsylvania in recent years and a much larger problem in Midwest states, has been confirmed in Maryland.
The initial case was reported from a tissue sample collected from a Harford County farm on Aug. 19 and was sent for lab testing.
Since the initial report, Harford County ag agent Andrew Kness said it also has been reported several locations in Harford County and one instance in Cecil County was reported on Sept. 2 but not yet lab-confirmed.
The disease appearing late in the growing season may have spared growers in terms of potential yield loss, Kness said, but he encouraged continued scouting for the disease.
“Right now most corn is probably far enough along to not worry about it too much this year,” Kness wrote in the University of Maryland Extension’s Agronomy News Sept. 6. “Once corn reaches mid-to-late dent, yield losses have been reported to be less severe.”
However, he added, corn that is infected at the early dent stage or earlier, has the potential for significant yield loss.
Caused by the fungal pathogen, Phyllachora maydis, tar spot was first discovered in Pennsylvania in Lancaster County in 2020 and has since spread to several neighboring counties.
This year seven Pennsylvania counties have reported the disease.
On corn plants, the disease presents as raised lesions that may look like black paint flecked onto the leaves only these marks don’t wash or scrape off of the leaf.
It was first detected in the United States in Illinois and Indiana in 2015 and has rapidly spread throughout the Corn Belt.
Tar spot has the potential to cause significant yield loss on susceptible corn hybrids if the right conditions are present and infection occurs early enough in the growing season.
In 2021, it was estimated that tar spot reduced yields more than any other foliar disease of corn in the United States.
The fungus that causes tar spot does not infect any other plant species other than corn and it can persist year-to-year in infected corn residue. It also can spread locally via wind-blown spores or by moving infested corn residue on combines or other equipment to new fields.
“If you have a dedicated no-till or reduced till system, I don’t think there’s enough data to support going out and tilling everything,” Kness said. “With that said, things that can help accelerate the decomposition of old corn residue or bury some of it can help in some small capacity.”
It also prefers cooler temperatures — 60 degrees to low 80s F — which Kness noted are not frequently present in August and September in the Mid-Atlantic.
“So, this disease, while it may be present in a field, will not flare up into epidemics every year, only when we get those cooler temperatures coupled with moisture,” he said.
Kness said hybrid resistance to tar spot plays a large role in managing this disease.
Foliar fungicides applied around VT/R1 also play a role in managing the disease.
But he still urged growers to become familiar with the signs of the disease and to scout fields as the corn matures.
Farmers who suspect they have it in a field, are encouraged contact their local Extension agriculture agent.
“There are several look-alikes that can be confused with tar spot, such as insect frass, bird droppings, and some other foliar diseases, so proper confirmation is essential as we want to monitor the spread of this disease in our state,” Kness said.
Growers can track the disease across the United States at https://corn.ipmpipe.org/tarspot/
“Time will tell just how severe this may be in our area or to what extent it will play long-term, but growers should have it on their radar, especially for the 2023 crop and beyond; particularly for those counties in Northern Maryland bordering Pennsylvania,” Kness said. “Considering it seems to be quite happy in the Corn Belt and in Pennsylvanie, it’s probably not leaving us anytime soon and this was likely an unavoidable situation,” Kness said.