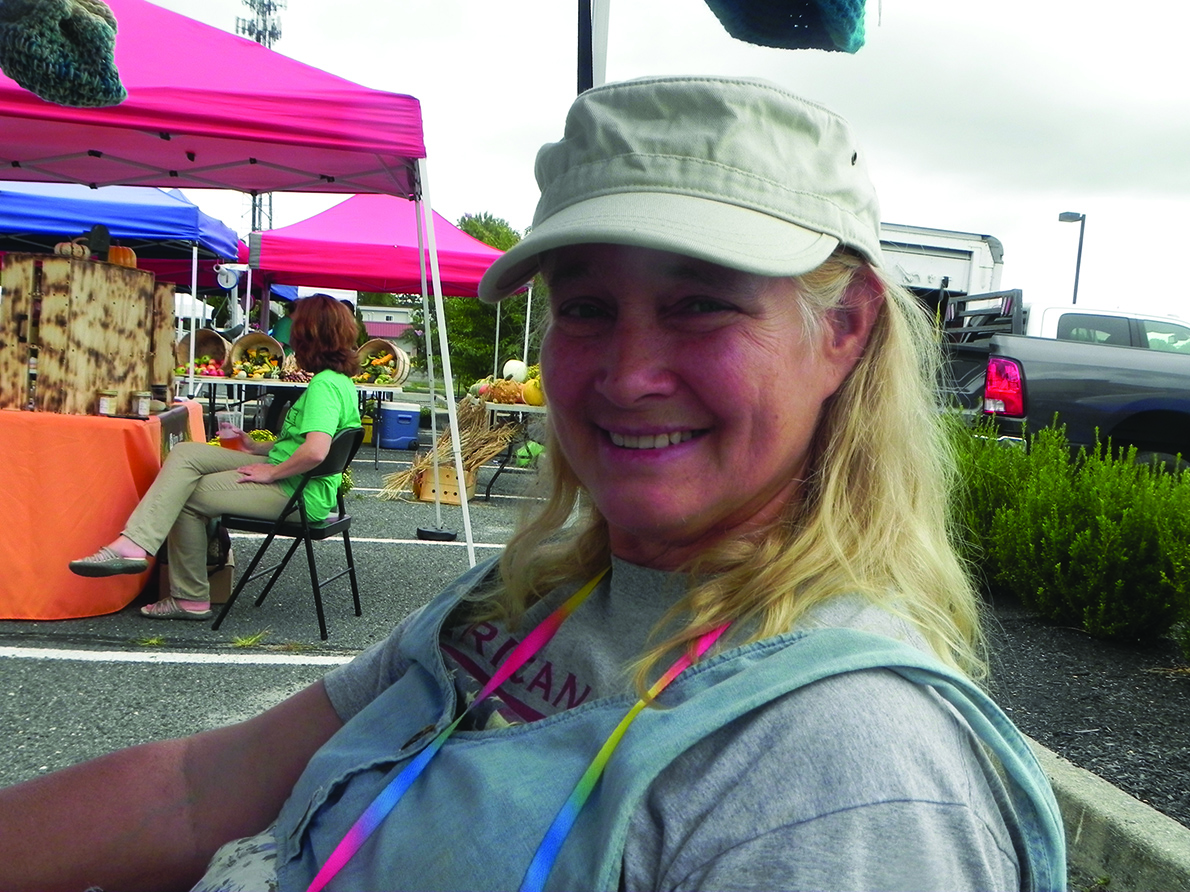 Elaine Taylor of Shangri-La Farm said the Howell Township Farmers’ Market has grown from seven vendors and a food truck at its opening to 18 to 25 vendors. (Photo by Richard Skelly)

HOWELL TOWNSHIP — Vegetable and horse farmer Elaine Taylor of Shangri-La Farm on Maxim-Southern Road here, came to township officials more than three years ago with her idea for a farmers’ market.
Now, her vision, which she shared with other local farmers and specialty food producers, has become a reality.
“I just kept going up there to the dais at township council meetings and said, ‘I really think we need this,’” Taylor said. Then, Mayor Theresa Berger returned from a vacation where she saw one or several really successful farmers’ markets and was sold on making the idea work in this sprawling township, nestled between Freehold and Lakewood.
Taylor and others held planning meetings at the township library and they were told by the administration they’d have to form a separate non-profit corporation, apart from the township. So they did, and on Memorial Day weekend of this year, the first Howell Township Farmers’ Market was held.
“We all worked on it together,” said Taylor, whose Shangri-La Farm is about five minutes from the municipal building. She added she was delighted that a large farm, Kauffman Farms on Yellow Squankum Road, got involved and began participating from the start.
“I was happy when Kauffman got on board with us, because they’re a very big grower,” Taylor said.
“I was on board with the whole concept this time around,” Doug Kauffman of Kauffman Farms. “It’s come up to the council a couple of times now. This time I felt we had to do it, it’s right here in the community.”
Taylor also credited baker and cupcake maker Amber Toomey, who handles much of the marketing and social media efforts for the market.
“I knew Elaine through a co-worker and I went to a meeting at the library and before I left, I was part of the team,” Toomey said, adding she’s also had roles in managing farmers’ markets in South Carolina, North Carolina and Georgia.
“We’ve grown from seven vendors plus our food truck on Memorial Day weekend to where we’re at now, anywhere from 18 to 25 vendors,” she said.
An added bonus is live, local musicians who perform on the steps of the municipal building.
“Every week we have a steady turnout and our food vendors and farms tend to sell out or come close to selling out each week,” Toomey said.
The market hours are Sundays from 10 a.m. to 2 p.m. and held in the sprawling parking lot for the Howell Township Municipal complex on Route 9 North and New Friendship Road.
Signs on Route 9 North and South guide motorists into the parking lots.
While it can get quite hot on the asphalt parking lot, there is talk of perhaps shifting the location to a more shaded parking lot next spring, on the south side of the sprawling, 3-story municipal building.
A folk-rock duo from the area, So Inclined, performed on Sept. 27 and was well received.
“When you’re out here in summer, everybody’s hot – patrons and vendors — so it’s a shared experience,” Toomey said.
“I was out here in a monsoon one day, but it’s become the place to be on Sundays here,” Toomey added.
Aside from Kauffman Farm, Taylor’s Shangri-La Farm vegetables and herbs and Toomey’s Betsy & Lola’s baked goods, vendors include My Brittle, Jem’s Touch Plants, Jersey Charm Coffee, Krakus Polish Deli, High Mountain Foods, Wicked Good Spice Blends and the Simply SoFrito food truck.
An array of specialty vendors are also on site, selling embroidery, glass creations, walking sticks, and civic groups like the Howell Heritage and Historical Society also are present.
The market’s final sales day for the season was Oct. 25 and then two more outdoor meetings will be held on Sundays, Nov. 15 and Dec. 13.
Both will be outdoors, rain or shine, Toomey said.
“We’ll have heaters and we’re working on some hot beverages and other family-friendly options beyond just the vendors to give it a little twist,” Toomey added.