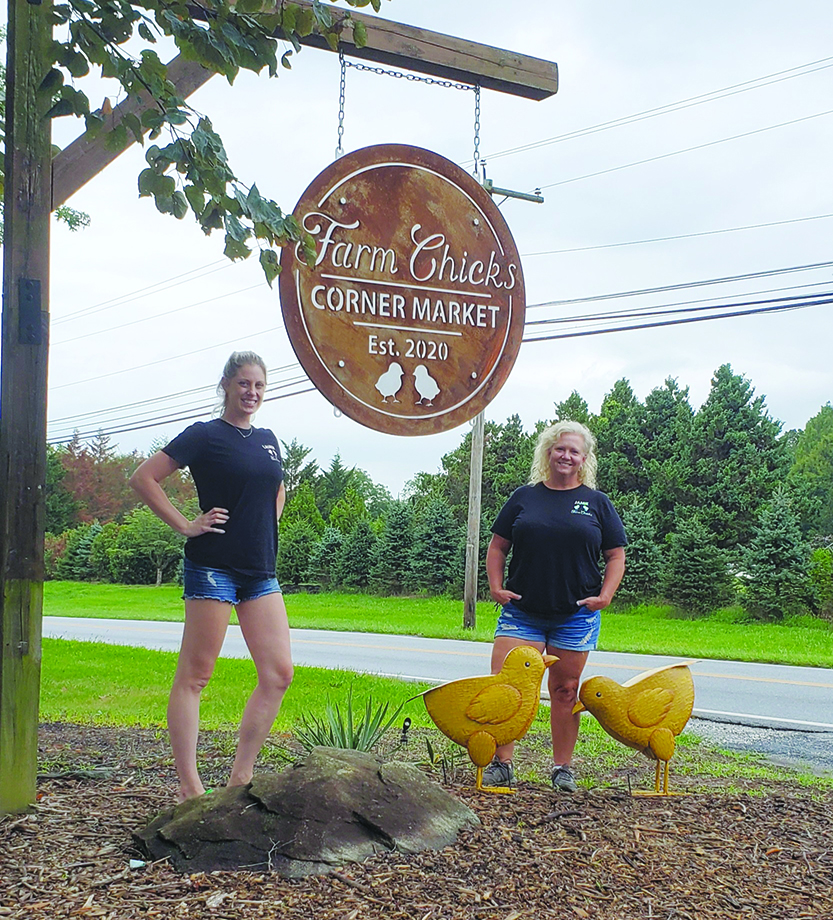 Taking a break from preparations before their Labor Day grand opening, Lauren Green and  Jamie Condon, co-owners of Farm Chicks Corner Market as well as “farmhers” of their own operations, pose with a new store sign. (Photo by Joan M. Kasura)

REISTERSTOWN, Md. — In the midst of a worldwide pandemic, Jamie Condon and Lauren Green, longtime friends and farmers, decided they needed to become business partners.
In July, they decided to permanently reincarnate the pop-up farmers’ market that had been sponsored by Simonds Nursery this past spring in its retail space, and turn it into “a country farm market to provide an additional retail outlet for local farmers and craftspeople that may need a little helping hand.”
“We went from planning to opening in three months,” said Condon, who, as owner of Playtime Pastures, raises various livestock and grows Christmas trees with her family on A Snowball’s Chance Christmas Tree Farm.
Even though they quickly realized that “there was a lot we didn’t know” in moving from agriculture to retail, with each visit to research their potential vendors, both women became determined to make this venture successful; and thus, Farm Chicks Corner Market was born.
“The universe really aligned,” said Green, who, along with Condon and a couple other local vendors, participated in the eight-week spring pop-up market.
There, as owner of Green Girls Farm, she sold her organic vegetable and herb plants along with early summer produce during the market’s last few weeks in June.
“You don’t often get a chance to try out a space before you move in, especially one that was already a commercial space,” Green said. “Even the neighbors were excited.”
Thanks to that spring “try-out,” both women realized that the market property, 10 minutes from Reisterstown and on the corner of a road that serves as a busy route between Reisterstown and Carroll County, would provide ready exposure.
Indeed, a month in from their grand opening on Labor Day, “we’ve been a lot more successful than we thought we’d be,” Green said.
Jennifer Pahl said she isn’t surprised.
Yet another longtime friend from a group of six women that include Condon and Green, Pahl, a sixth-generation farmer who raises hogs and laying hens in addition to helping her mother run a 100-acre produce farm in nearby Granite.
Condon and Green approached Pahl early in the summer to supply the lion’s share of the store’s produce along with her fresh pork.
Pahl said she “knew from the start they would be successful.
“If you give Jamie a project, she will work on it at 110 percent because that’s how she is,” Pahl said, while pointing out both women’s passion in wanting to “teach people about where their food comes from” as just one more positive for their business’s success.
“They understand that produce changes from week to week and they’re willing to educate their customers accordingly,” Pahl added. “They help their customers understand that it’s not a grocery store. It’s a farm store.”
Part of that education includes reaching out to the community through store events such as their “wildly successful Pony Palooza event” held a couple weeks after their grand opening.
“We have two acres of outside space,” said Condon. “Everybody was ready to do something fun outside in a safe environment.”
That success, and the additional outside acreage included on the retail property, has inspired them to plan additional events for the approaching holiday season, beginning with a Monster Mash on Sunday, Nov. 1.
Other community events, such as wreath-making workshops by Condon, will utilize the covered, yet expansive space available in the property’s two large greenhouses.
Even their name, Farm Chicks, speaks to the community they’ve begun forming.
According to Condon, it refers to the community of “women craftspeople and farmhers who make up most of our vendors.
“What’s funny,” continued Condon, “is we didn’t even like the name at first; but, we were both like, ‘Well, we don’t hate it.’
Since then, everything has fallen into place, and we’ve found it to be a fun, empowering brand, a reminder to all of us not to sell ourselves short.”