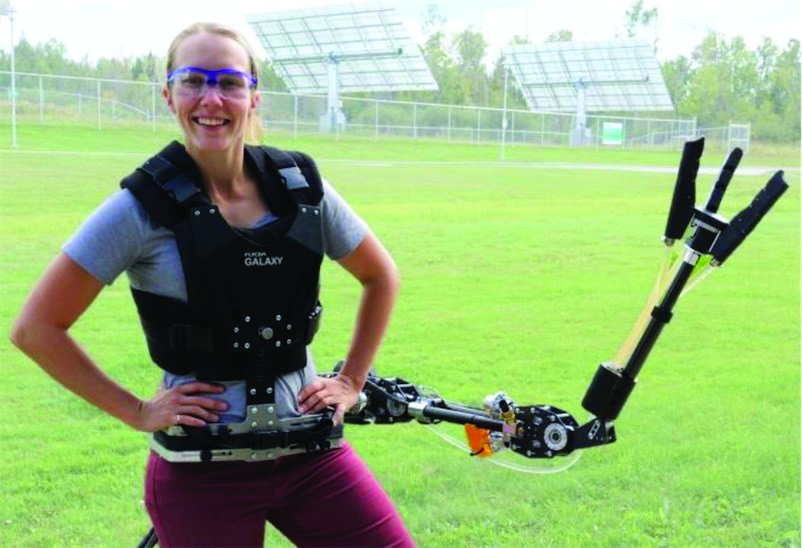 SHERBROOKE, Quebec — For famers who have wished for a third arm to move faster through the busy harvest season, a group of Canadian researchers may soon be able to make that wish come true.
Researchers from University of Sherbrooke have invented a waist-mountedm remote-controlled hydraulic arm that can help pickers with gentle tasks like picking fruit, but it also possesses the strength to smash through walls.
The goal of the novel new joint is to “mimic the performance of a human arm in a multitude of industrial and domestic applications,” the university said.
It is known as a supernumerary robotic arm and it has three degrees of freedom.
It is hydraulic and actuated by magnetorheological clutches and hydrostatic transmissions.
It’s specially designed to provide a lot of power while minimizing how much mass the user has to wear.
It does this by connecting to the user through a tether.
It weighs about the same as a real human arm and it can lift up to 11 pounds.
For the time being, it is definitely not autonomous, the researchers said.
The arm is controlled by a second human via a miniature handheld application.
Right now it functions as a co-worker: either performing the same task as the user in parallel or doing something different in order to free up the user to do stuff that requires more creativity.
“For now, it is still not too bad having this arm on my hips,” lead researcher Catherine VéronneauI said. “Since it’s only 4.2 kilograms (without payload) and it is located near my center of mass (to reduce inertia).
“I get used to it quickly, and I can compensate for some of the movements (x, y, and z translational movements), but I still have some remaining issues to compensate for torsion movements (like if the arm is hitting a tennis ball with a racket), which is funny!”
“We also noticed that the harness needs to be rigidly connected to the body because if there is some backlash between the harness and the body, it can be uncomfortable.”