Thompson: ‘We’re in a crisis moment’ 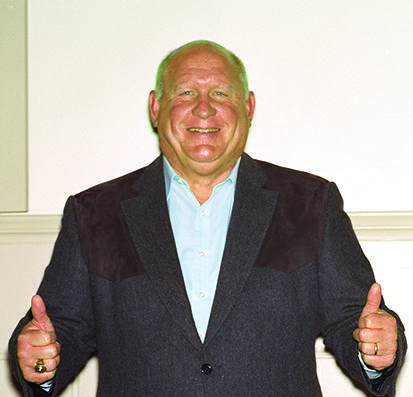 Congressmen Glenn “G.T.” Thompson, R-Pa.,the ranking member of the U.S. House of Representatives Agriculture Committee, is optimistic after the press conference when he released his bill to address costs and regulatory barriers in agriculture. (Photo by Bob Ferguson)

WASHINGTON — On June 15, Glenn “G.T.” Thompson, R-Pa., the U.S. House Agriculture Committee Republican Leader, introduced the bill, “Reducing Farm Input Costs and Barriers to Domestic Production Act.”
This bill, H.R. 8069, requires the Biden Administration to reverse its regulatory barriers to domestic agricultural production and provide immediate relief to families across the country.
More than 20 original cosponsors joined Thompson, including Republican leader of the Natural Resources Committee Bruce Westerman, R-Ark., and Chairman of the Western Caucus Dan Newhouse, R-Wash.
Following the introduction of the bill, Thompson released the statement: “The U.S. and the world face a disrupted global food system resulting in increased energy prices, fertilizer cost spikes and shortages, and worsening food scarcities in developing countries. We’re in a crisis moment, and we need concrete, immediate policy actions to mitigate impacts both at home and abroad. American agriculture, if given the right tools and regulatory confidence, can serve a vital role in alleviating global food instability and mitigating costs for consumers.Despite these circumstances, the Biden Administration has neglected to take serious action to increase American production. In fact, since the war in Ukraine began, the Administration has continued to take nonsensical regulatory and policy actions that have created needless uncertainty for farmers, ranchers, and working families, and has further limited our ability to meet the food demands of our nation and the world. This bill will reverse many of the more harmful regulatory burdens spearheaded by this administration, address escalating input costs, and provide certainty to farmers, ranchers, agribusinesses, and other entities across our food and ag supply chains.”
The bill addresses numerous specific changes and reverses.
Among those, it changes Environmental Protection Agency’s actions against crop protection tools, offers clarity to Waters of the United States regulations, addresses the Security and Exchange Commission’s proposed rule on climate-related disclosures, requires an economic analysis on the costs and benefits of the controversial GIPSA rules, mandates an EPA label determination on glyphosate, addresses a consideration for potash and phosphorous on the critical minerals list and revisions for domestic production, offers changes to meat and poultry efficiency requirements, and provides incentives for nutrient management and precision agriculture.
Among the bill’s provisions, the following reforms are included.
The EPA would be required to permit the sale of certain suspended pesticides for five years. This reform would enable alternative planting decisions regarding crop protection to be made.
The provisions for WOTUS reinstates the Trump-era WOTUS rule. The final rule, “The Navigable Waters Protection rule: Definition of ‘Waters of the United State’ ” and published April 21, 2020, would take effect with this act.
The SEC’s proposed rule on climate-rate disclosures, including the scope 3 emissions that required farmers to track onerous data, would be rescinded.
An economic analysis by USDA would be provided and publicly posted 90 days prior to reproposed rules on packers and stockyards regulations. Contracting and tournaments, unfair practices and undue preferences regarding competition would be addressed.
The act’s provision specifies that EPA’s final regulation of any label of a pesticide product that contains glyphosate shall not contain a cancer warning.
The Secretary of the Interior would be required to evaluate potash, phosphate and other minerals related to fertilizer. Permitting and leasing policies would be evaluated for recommendations on how to increase domestic production.
The act requires USDA to review requests for meat and poultry line speed changes and maintain process control of swine line speeds.
Nutrient management and precision agriculture provisions include specifics on loan priority, expansion and incentives. Cover crops, conservation management, comprehensive nutrient management training and other innovation plans are considered.
Reflective of the seriousness of the bill’s intent to reduce costs and barriers, numerous congressmen and women accompanied Thompson’s press conference.
Many members of the House Agriculture Committee were present, supporting the bill, and echoed the need for reversing the Administration’s current policies. They voiced, “Food security is national security,” “Why in the land of plenty, do we see empty shelves?,” “You can’t run the economy from the White House,” “Roll back the punitive policies,” “The issue is not right and left, it’s right and wrong,” and “You can’t spend your way out of inflation.”
Plus, the group praised the bill. They said, “This bill affirms science-based production,” “The U.S. is the gold standard. We produce the cheapest, most abundant food in the world,” and “Let’s work together on common sense solutions.”
Newhouse said the Administration appears blind to the 40-year high of the cost of living.
He said that farmers struggle to even find fertilizer as well as afford it. Further, livelihoods are at stake with WOTUS. He stressed, “It’s clear the failure to display leadership is hurting rural communities.” He urged the Administration to change policies. “Take immediate steps to reverse. We all deserve this,” referring to the bill.
At one time during the members’ comments, Thompson neglected to designate one as a ranking member. “Maybe I’m a prophet,” he quipped.
H.R. 8069 follows a letter sent by Thompson, Republican Leader Kevin McCarthy, Minority Whip Steve Scalise, Republican Conference Chair Elise Stefanik and 92 other Republicans. In the letter, the Members write that President Biden “has neglected to take serious action to increase American production,” and by doing so, has limited “American farmers’ ability to meet global demand.”