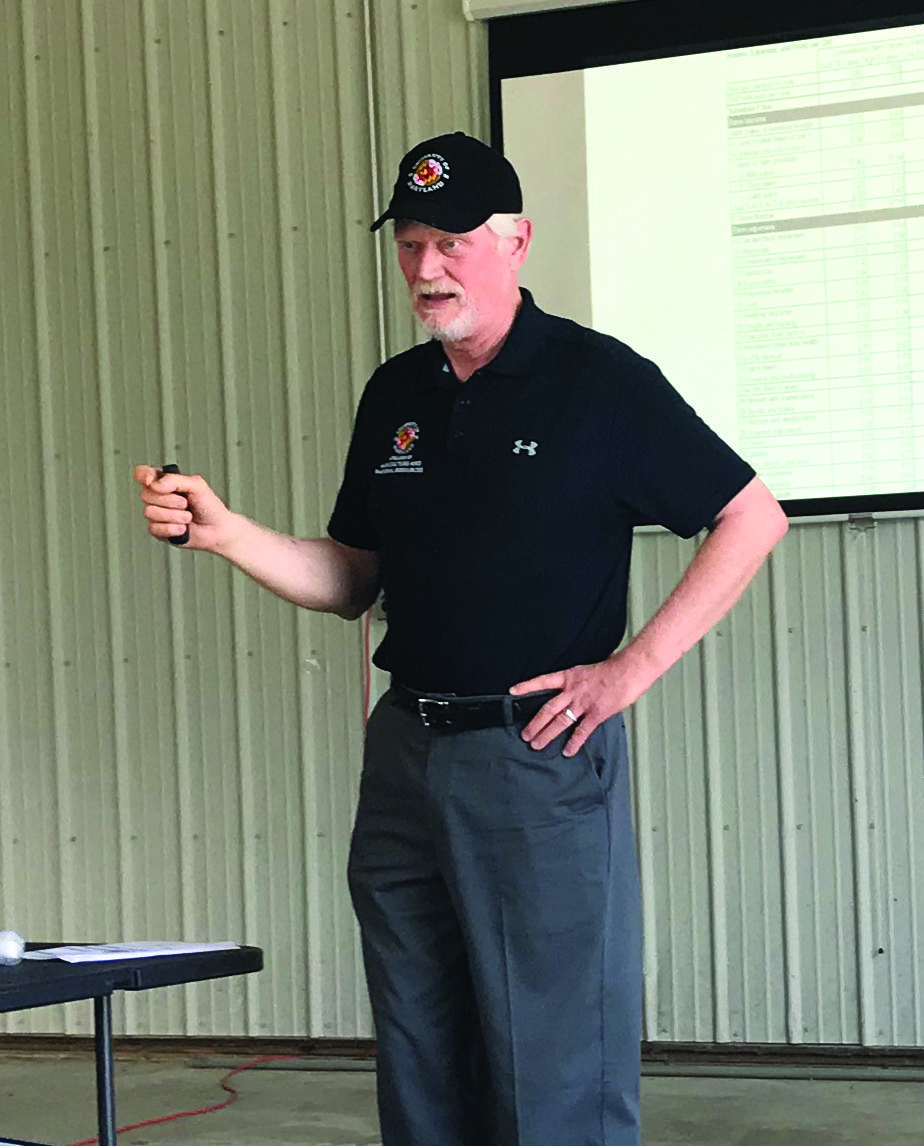 Dale Johnson, a farm management specialist with the University of Maryland Extension, presents at the university’s Dairy Field Day in Clarksville on July 13. (Photo by Jonathan Cribbs)

But low-performing farms are struggling, averaging less than $16,000 a year.

That’s according to the most recent financial analysis of 18 conventional dairies in Maryland maintained by Dale Johnson, the Extension’s farm management specialist. Johnson presented the update — part of a continual review of the state’s dairies he began in 1995 — at the Extension’s Dairy Field Day at the university’s agricultural research facility in Clarksville on July 13.

The average profit of those farms, which have an average herd size of 134 cows, is about $57,000. His numbers continued to illustrate a frustrating but fixed economic reality for the state’s dairymen, best illustrated, he said, in a quote by Danny Klinefelter of Texas A&M University.

In dairying, “top farmers are profitable, average farmers just barely get along, and bottom farmers are losing money and will go out of business,” Klinefelter said. “It means that your farm success and survival depends on your continuous improvement to stay in the front of the pack. … Maintaining your status quo will lead to failure.”

That truth is reflected in his analysis, which is based on a three-year average from 2018 to 2020, he said.

“You can see that $57,000 is not much money, but some farmers are making reasonable money and other farms are just barely getting along, like the (Klinefelter) quote said,” Johnson said.

Six additional organic growers averaged about $78,000 in profit per year with an average herd of about 90 cows. Maryland now has 331 dairies Extension officials said, slightly better than Johnson’s December projection that the state’s total number of dairies would fall from 348 in 2019 to 330 last year. The state’s total number of dairies has been in free fall for decades as the increasing cost of producing milk in the state rises while the industry internationally rapidly consolidates, leaving Maryland producers, often hemmed in by development and high land prices and unable to easily grow, at a competitive disadvantage.

“How do they stay in business?” he asked about the state’s average farms. “Well, you sell calves, you sell crops, you sell cull cows, you have other income. Last year was a big government payment because of COVID. That certainly helped out some farms. People say, ‘The only reason they stayed in business was because of COVID.’ No, if we hadn’t had COVID, we would have had better markets.”

But the primary difference between the state’s most profitable farms and the most vulnerable is the cost of production. High-performing farms with a larger average herd size spent $19.85 per hundredweight. Low-performing farms spent $21.15. Across all conventional dairies, profit per cow was $425.

“That’s depressing because… it hasn’t been this low for years,” he said. “I think when I started (this study) it was around that number, maybe a little bit lower.”

Good management is still the key to success, he said. Profitable farms spend less on items such as feed.

“The common thread is nickel-and-diming,” he said.