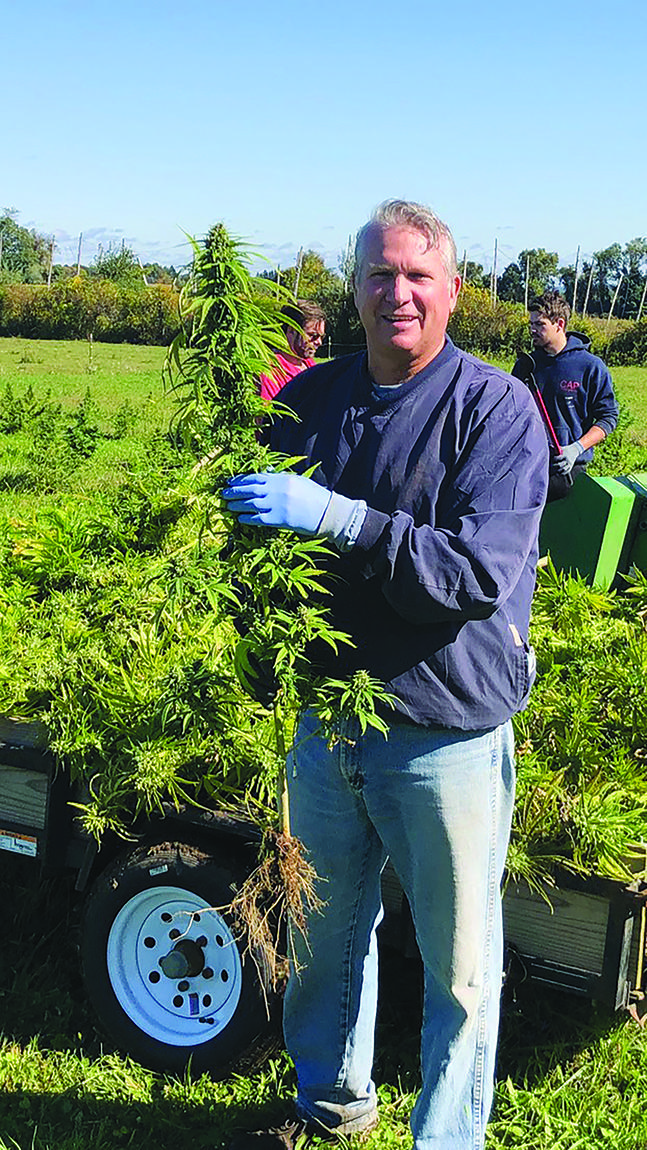 LONG VALLEY — The Take a ride in his SUV with Totten Family Farm owner, Jim Totten, and you know his heart is every bit of his Long Valley acreage.
The irrigation ponds, the woods, the grazing fields, the farm market — all of it.
Including the old truck. “It’s a 1938 international truck that was pulled out of the woods when I bought the farm,” he says, pointing to a rusted, green truck that, really, is just a much part of the farm as loveable Hannah the cow, which belongs to one of his twin daughters, Adriana. Jim spotted the aged vehicle and yanked it into view with his tractor.
“It had a large, dilapidated wooden rack in the back of the flatbed that I removed,” Totten says. “There is still air in the tires and oil in the engine. If had the money, I would love to bring her back to life.”
For Totten, the truck symbolizes family farm life: the hard work and getting back to the basics.
“All of what we tried to instill in our children,” he says.
Daria is Jim’s wife, and Adriana and Natalie are their 16-year-old twin daughters. The young women hope to study Premed and Animal Science respectively in college.
“All my life, this has been such a big part of who I am,” said Natalie of Totten Family Farm.
When asked if the farm were to be taken away, removed from the lives of her and her sister, she reflects.
“I remember me, my dad, and Adriana. We were walking, and the sun was setting, and we saw all the cows grazing — it was so beautiful.” She said, before looking at her father. “He has definitely grounded me; made me an independent, responsible, grounded person who appreciates nature and animals. Without him, I would be a different person.”
“I love it, the family dynamic, too,” says Adriana. “I am so proud of what he’s done.”
With those tributes, Jim’s eyes get misty. “Healing people and healing the soil, it’s the same thing,” Jim says about Totten Family Farm’s purpose. “It’s all about the soil. My wife thinks I’m nuts: I talk about the soil and I salivate. What you put in the soil is going in your body. We are not Organic Certified, but I always say everything is beyond organic.”
Jim recalls the day he put a bid on the available, former 110 (now 80) acres, and it was accepted. It was six months prior to his wedding.
“It was originally a dairy farm. It was at an auction. I said, ‘I better do it now, he recalls with a laugh. “So, I bought it.”
That farmland and its house and barns, most of it dating back to 1738, was all his — and Daria’s. “When he purchased this farm,” says his wife, “his dream was to have wide open space, have a farm just like when he grew up.”
Jim’s grandfather had a farm in Franklin Lakes. He sold it when Jim was 13, and the youngster’s pain lingered. “I was really sad,” he recalls on a recent rainy Monday. “I always had fond memories of that. It was always in the back of my head.”
Initially Jim, 63, a foot and ankle surgeon, planted pumpkins, and then he and his dad planted tomatoes, doing conventional farming, but he was leaning towards going organic.
“We have to make sure our kids eat organically,” he said to Daria at the time. “My wife was very instrumental in that. It was a transition. It was over a period of time that we tried to bring the land back.”
Initially there were chicken and pigs, and then Heritage cows were introduced to the land, as was rotational grazing.
“I almost consider myself a grass farmer,” Jim says. “I converted everything over to organic. I planted the whole farm in clover, and it took about three years for the grass to come back.”
His cows are fed the non-GMO grains from nearby Jersey Girl Brewing.
“Ninety-five percent is all grass-fed — the cows and the other animals, and the other 5 percent, we augment with that.”
Jim also gets leftover organic vegetables from Dean’s Natural Food Market in Chester for his animals.
The meats that result go from the land right into the Totten Family Farm store.
CBD is the latest Totten Family farm venture.
“Originally it was a Class 1 drug,” says Jim, “and now they’ve brought it down to a dietary supplement. I got involved with it with one of my great aunts; she was 96 at the time and she’s still alive, but she had colon cancer. I said, ‘This is perfect between doctoring and farming — it was a good hybrid. So that’s how it came about. We have our own crop, about 1.5 acres.”
Adds Daria, an Ob/gyn currently working as a national medical director for Optum, “I think it’s a beautiful piece of property, and we’re lucky to have it.”