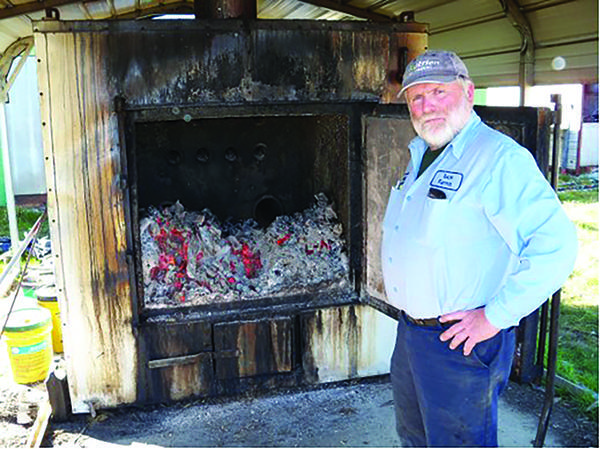 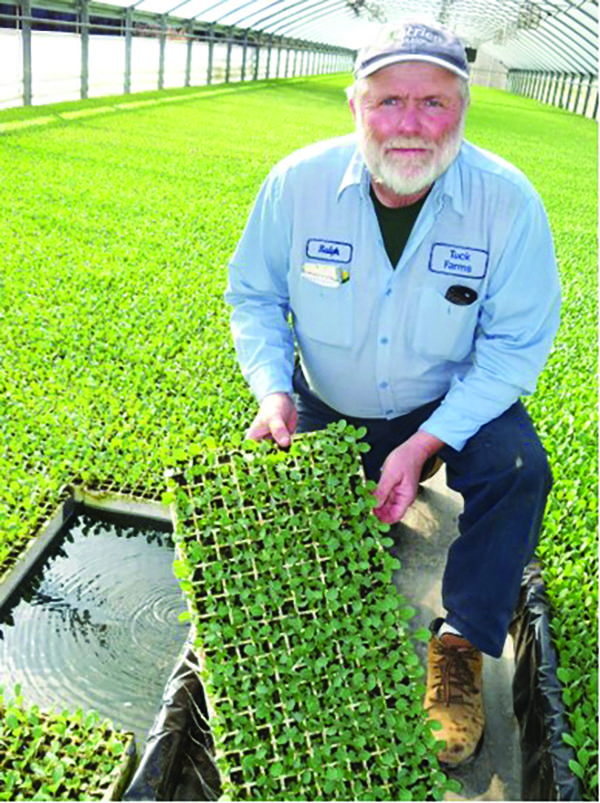 Ralph Tuck of Halifax County, Va., grows a variety of plants in his greenhouses, including the cabbage shown above. Four boilers heat Ralph Tuck’s greenhouses and tobacco barns. (Photos by Rocky Womack)

VIRGILINA, Va. — Ralph Tuck of Halifax County, Va., started using hot water to heat his greenhouses and tobacco barns in 1998, about the time tobacco companies wanted growers to eliminate tobacco-specific nitrosamines.
These carcinogenic compounds are found in tobacco and tobacco smoke and presented a possible health hazard back then, according to the U.S. National Library of Medicine. To reduce the cured tobacco of nitrosamines, many growers turned to heat exchangers, but Tuck thought of a more ingenious idea.
“Instead of going to heat exchangers and all such as that, we went still further to water, which the company highly supports because that’s no contamination,” Tuck says.
He uses four, 8-foot by 8-foot wood-fired boilers which warm the water to heat five of his greenhouses and 13 tobacco bulk barns. The boilers hold 1,500 gallons of water each, and the water heaters can be seen inside the greenhouse, each with timers that automatically turn on the lights, fans and heaters. So he can either heat or cool the greenhouse automatically, day or night.
Of course, when his barns are curing tobacco, the greenhouses aren’t being heated since it is the summertime and fall of the year. For these five greenhouses, he uses LP gas as a backup system. In his remaining three greenhouses, he heats with LP gas alone.
What economic savings do the boilers have on his bottom line? “If LP gas is down, maybe nothing,” Tuck says. “If LP gas is higher like it is right now, a pretty good amount.”
He figures he saves about 50 percent in fuel cost per barn by curing with a wood/hot water boiler system; however, if gas is $1.00 or less, he doesn’t save money.
Tuck says water does cure tobacco slower than LP gas and estimates it takes an average of 10 days or about an average day slower.
However, a wood/hot water system is not all savings. He says a grower who wants to go this route must figure in the cost of labor and time it takes to cut the wood and throw it inside the boiler. Tuck does cut his own wood.
He estimates he runs one to two tractor trailer loads of wood per week when all four boilers are operating, “so the reality is, this is not for everybody. The huge farmers can’t do this; we’re actually too big to be doing it.”
At this time, he said he doesn’t plan to add any more boilers.
In his greenhouses, Tuck raises vegetable plants for the home gardeners (retail), and farmers and cooperatives (wholesale) who raise vegetables for places such as Wal Mart, Wegmans and Whole Foods. Some of the vegetable plants that he grows include cabbage and broccoli. In fact, he grows several million cabbage plants, several thousand broccoli plants, 500 acres of tobacco plants and one greenhouse dedicated to hemp plants. Besides these plants, he also raises a full line of garden plants such as lettuce, tomatoes, squash, cucumbers and many others.
He used to grow produce on a small scale but found raising the plants for others work better for his farm operation and his buyers.
Tuck tries to sow his greenhouses with tobacco seeds the last two weeks in February if they are going to growers in the Carolinas, and the first week in March if it’s going to ones in his area and further north.
This Virgilina, Va., grower raises conventional flue-cured, burley and dark tobaccos on clay/rocky soils. His conventional flue-cured varieties that he plants are K 326, CC 143, CC 145 and NC 196. Tuck’s burley variety is Clay’s 404, and his dark variety is Shirey. When selecting varieties, Tuck says, “You have to judge between which ones suit your soil; suit your market that you’re looking for. Some markets accept the brighter [colored] tobacco; whereas, the other markets seem to want the darker [colored] tobacco.”
He usually starts transplanting his tobacco about May 1. If he transplants any earlier, he worries with late frosts and cold soils. He is one of the first original, certified organic flue-cured tobacco farmers in Virginia, starting in 1997. The varieties that he plants for organic production are K 326, CC 143 and CC 145.
Tuck raises 15 varieties of hemp plants. Biomass clone plants and seedlings are for those producing the crop for CBD. Some of those varieties include Baox, Berry Blossom, and Sour-T.
He also grows specialty hemp clone plants and seedlings for those producing smokable hemp. These varieties are Gloria, Sour-T, Money Maker, Hercules, Sour Space Candy, Elektra, Sour Cherry, Cherry Trump, Lemon Haze, O.G., Bubba Kush, Stout and Magic Bullet.
With the help of a wood/water boiler system, the ability to make good choices in plant varieties, and the need to exercise good judgment allow Tuck to diversify his farm operation and satisfy his customers.