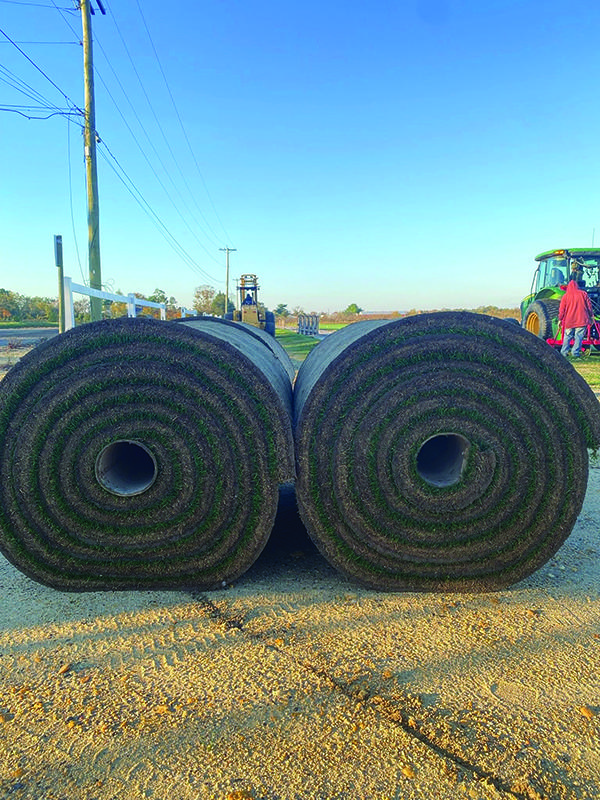 HAMMONTON — When people watch the Washington Nationals, Philadelphia Eagles, Milwaukee Brewers and other professional sports teams play games in their respective stadiums, they’re also looking at slices of New Jersey.
The green grass growing in these stadiums was grown at Tuckahoe Turf Farms in the Pine Barrens of South Jersey.
Beyond stadiums used by professional sports teams, the grass from Hammonton has even graced the National Mall as well as the United States Capitol grounds in Washington, D.C.
“We’re proud of our quality turf,” said Allen Carter, business administrator at Tuckahoe Turf Farms. “We have about 800 acres of land in production, primarily in sod.
“We grow a few varieties of Cool Season Grasses. Two of our major types of grasses are 100-percent Kentucky bluegrass, while the other type is a mixture of Kentucky bluegrass and fescue.
The fescue seeds we use are grown in Oregon, while the Kentucky bluegrass seeds we plant are grown in Oregon and Washington State.”
The mixture of Kentucky bluegrass and fescue works well for many customers, he said, because you get the benefits of both while minimizing the challenges of each individually.
“Mixing the two grasses together works because their roots knit together over time,” Carter said. “Fescue grass grows downward, while Kentucky bluegrass grows across.”
He also noted that Fescue is more drought resistant, while Kentucky Bluegrass is the opposite. Kentucky bluegrass grows well in full sun, while fescue can tolerate both full sun and part shade.
Among other types of grass grown in Hammonton have been special blends to meet specific customer needs.
For example, Carter said the turf grown for the National Mall was a custom seed mixture for the National Park Service.
“It took 18 months to grow the crop for the NPS,” he said. “We provided sod to cover 7 acres of ground at the National Mall.”
In addition to the stadium turf and governmental installations, Carter added much of their business is from landscape contractors in New Jersey as well as in neighboring states. Some sales are also made to homeowners. The bulk of the revenue for this farm is from the sod itself. While most installations are completed by customers and contractors, some revenue is generated by the farm through installation services.
“Some of our larger customers are as far west as the Mississippi River, north to the Canadian border, and as far south as the Piedmont in North Carolina,” said Carter. “We have used refrigerated trucks, for example, to move turf to Chicago. From loading in Hammonton to installation in Chicago, timing is limited to 18 to 24 hours.”
He said that the sandy loam soil here is great for growing sod. In addition, having nearby sand quarries is very useful in operating the farm.
The sod is scraped from the ground using precision equipment that cuts only the amount of root systems and soil as needed for transplantation, while leaving the original soil in place.
“The sod is typically rolled in 10 square foot segments — five feet long by two feet wide; each segment weighs about 35 pounds,” he said. “This makes it a little easier to handle in the transport and as workers unload and install the sod.”
“Our sod harvester with an on-board computer can cut two rolls of sod at a time and load 10 rolls on an arm that transfers the rolls to a pallet,” Carter said. “Each pallet holds 60 rolls — roughly one ton of turf.”
Tuckahoe Turf Farms is one of about 29 sod farms in New Jersey.
“Our pricing is likely higher than others,” Carter said. “We focus on quality. That focus means that we are constantly updating our equipment and technology. That all comes with a price. We’ve been doing this since 1967, with the third generation of the Betts family members now running our operations.”
For a business that has a wide reach, Carter said Tuckahoe Turf Farms focuses on relationships to build its business.
“Most of business is either repeat business or business generated by word-of-mouth,” Carter said. “We invite groundskeepers from professional sports teams to come to Hammonton to review what we’re doing and, more importantly, what we can do to help them have turf that works for their operations.”