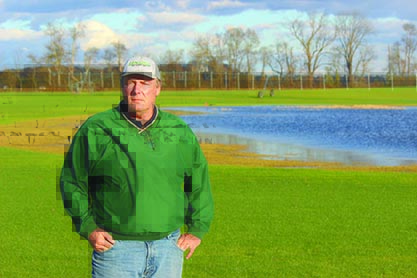 Tom Warpinski, owner of Central Sod Farms Inc., stands in front of pooled rainwater on one of his sod fields in Ridgely, Md. (Photo by Jonathan Cribbs)

An increasing number of intensely rainy days have boosted disease pressure, and those rains often leave standing water on fields, which can kill portions of a crop and delay planting. Several growers said they’ve lost at least 10 percent of their income to rain in recent years.

“It’s horrible,” said Jason Anderson, director of operations at Quantico Creek Sod Farms in Salisbury, Md. “It doesn’t matter how good the work (is that) you do on the land. You can’t control 6 inches of rain in 18 hours.”

Quantico Creek has planted more over the last several years to make up for the losses, he said. By next year, the business will be growing turf across 3,000 acres on multiple plots.

But if rainier weather is part of the Mid-Atlantic’s new normal, as some climatologists claim, Royal Sod Farms may need to retire small, problematic chunks of its Hurlock, Md., operation, company owner Brian Shufelt said.

“We haven’t had trouble surviving because of the rain, but it’s definitely made everything a lot more difficult,” he said.

Increased disease pressure is also arriving at a moment when tall fescue is becoming more susceptible to gray leaf spot and pythium, a disease that attacks the roots, said Tom Warpinski, owner of Central Sod Farms Inc. in Annapolis, Md., and a member of the Maryland Agricultural Commission. Now, if they’re anticipating periods of significant precipitation or moisture, Central Sod applies preemptive fungicides, he said.

“It helps,” he said. “I’d say the effectiveness is 75 percent. Rough average.”

Heavy rain can also damage a crop during the growing season, forcing the grower to wait for its recovery and delay harvest. The delay can eliminate entire growing cycles over time. It takes about a year and a half to grow sod to maturity and is planted in the fall. Soil needs to be relatively dry during planting. If it’s too moist it can stick to rollers on mechanized planters, disrupting the process, said Shufelt, who grows about 500 acres of sod. Heavy rain can also disrupt a normal mowing schedule, which allows the crop to overgrow, forcing subsequent mows to move slower, he said.

During harvest, wet weather can lead to equipment getting stuck in the field as well. The delays accumulate.

“You really need to be light on your feet and be ready to act when conditions are favorable,” Warpinski said.

But the rain also exacerbates problems that growers have little control over. Around many of Anderson’s fields, governments have not properly maintained drainage ditching, he said. In a heavy rain, it can lead to blockages and flood his fields, and there is no immediate solution.

“By law, we’re not allowed to go out there and work in their ditches. We can get in trouble for doing it,” he said.

Delaware does a better job than Maryland, he said. Wicomico County is particularly bad.

“They just don’t spend the proper money needed to keep these things maintained,” he said. “The water backs up, it can’t flow anywhere and we’re the ones who pay the price.”

To compensate, Anderson said his business has spent more on land grading and ditch work on its own properties, trying to redirect the rain.

The Delmarva region has experienced significant increases in rain over the last five years, particularly during the summer and fall, according to the National Weather Service. Summer rain in the Baltimore region exceeded its 10-inch average each of the last four years. More than 20 inches fell in Baltimore during the summer of 2018, the wettest year in the city’s recorded history.

The same is true in the Washington region, which experienced more than 20 inches this past summer, essentially doubling its average as well. This wasn’t the case a decade ago, Anderson said.

“If anything, back then you kind of had more of a problem with drought,” he said.

If the increased rain totals continue, the turf industry will adapt, even if, at times, it means harvesting sod in less-than-ideal conditions, Warpinski said.

“There is pressure to produce to keep customers supplied or they may look elsewhere to other regions of the Mid-Atlantic for their product if they can’t get it from a local grower,” he said.