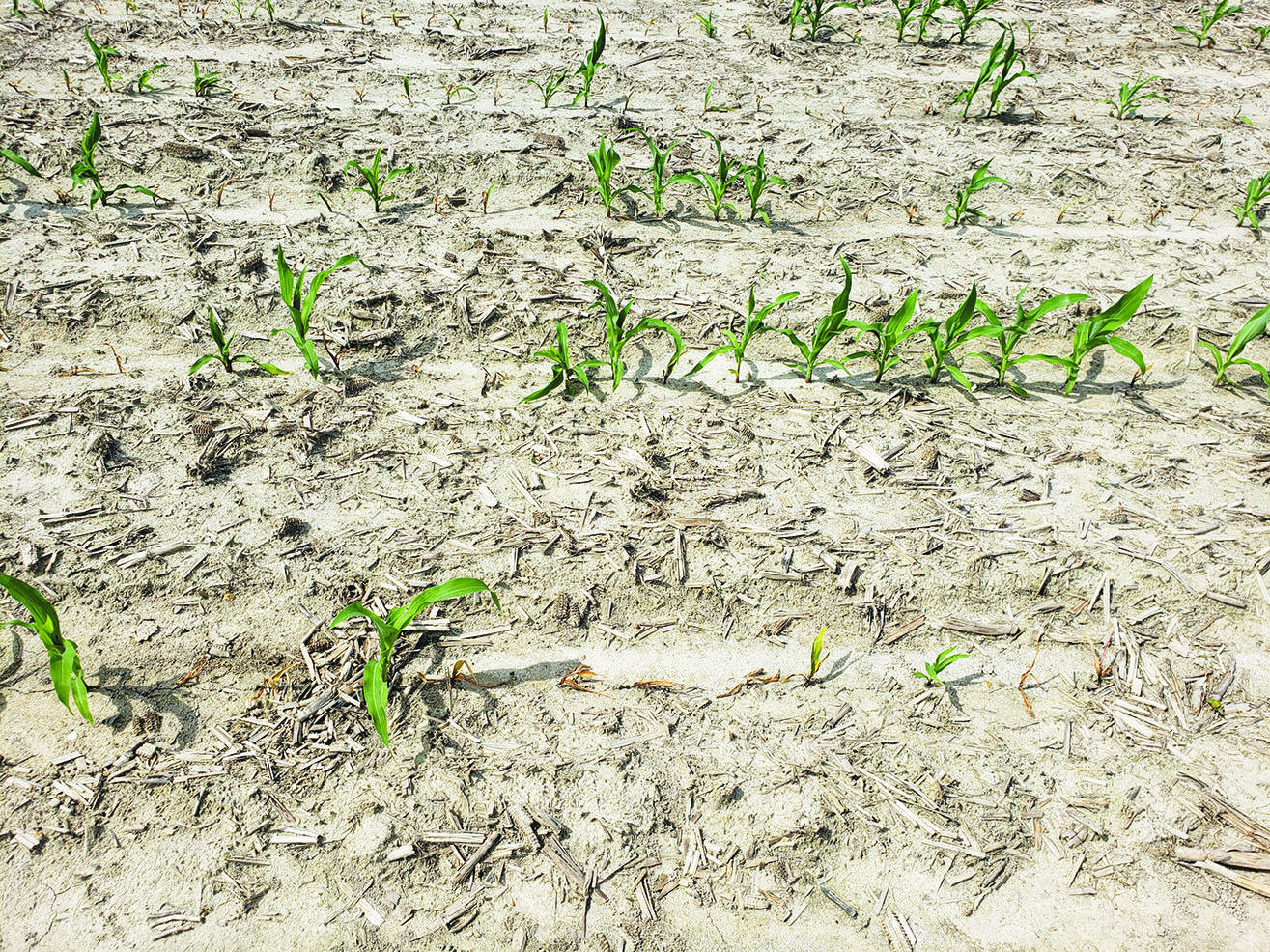 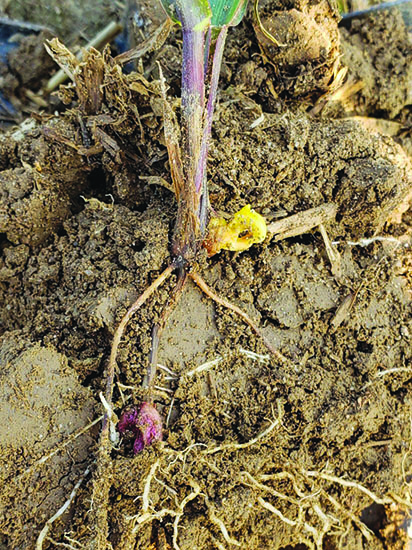 Symptoms of Pythium root rot can include stunted, slower growing plants, to severely infected, dead plants. Research underway at the University of Delaware aims to improve management strategies for the plant pathogen. In some cases of Pythium root rot, the entire root system can be infected and appear yellow to brown. (Photos courtesy Alyssa Koehler)

GEORGETOWN, Del. — The region’s recent dry spell has incidence of Pythium root rot in corn fairly low so far this year, but research into the plant pathogen by a University of Delaware team is expanding.
After cold wet springs in recent years ushered in a big influx of Pythium cases, Alyssa Koehler, UD Extension field crops pathologist, and a pair of graduate students began cataloging what species of Pythium are occurring in the region, testing how they respond to fungicide treatments and recording what weather conditions help them thrive.
Planting seed treated with an effective fungicide helps growers in the first three weeks after planting, as the seedling starts, but Koehler said in the weeks after, there is a window of susceptibility that growers have little defense.
“There’s this small window where the seed treatment has run its course and the seedling is not quite far along enough to defend itself and that’s where these Pythiums come into play,” Koehler said. “That’s sort of the basics of this research: What can we do in that window?”
Pythium’s impact on a corn crop can be significant and as high-level management growers push planting dates earlier, the risk of getting stung increases if the weather turns cold and wet for several days.
Koehler said infected seedlings can take one of two paths: the plant dies relatively quickly or “grows out of it” but is significantly hindered in plant growth and overall yield.
“Once they’re behind, they stay behind the whole season,” she said.
In last year’s trials, she said Pythium-infected plants yielded about 84 bushels per acre while the healthy plants averaged 219 bushels per acre. Some of the infected plants formed no ear at all.
Masters degree students John Bickel and Maddle Henrickson are assisting in the data collection and Koehler said they have identified over 15 species in the region.
The species each have an optimal temperature for growth and can respond differently to fungicide treatment so knowing what species is present can better inform management decisions, Koehler said.
“Pretty much from 50 degrees to 100 degrees, there’s a Pythium that has an optimal” Koehler said, but most of the species they’ve identified have an optimal temperature in the mid-70s to mid-80s.
Koehler said they have not found any signs of fungicide resistance in the identified Pythium species.
“Our products are still working but there is some variance among species,” she said.
Pythium is an oomycete pathogen, which Koehler said is “fungal-like” but not all fungicides are effective in controlling it.
With individual species isolated and maintained in a lab, the team can inoculate plants in a greenhouse setting for observation as well as trial different amounts of fungicide in the growing media to determine efficacy. Temperature can be controlled in the greenhouse for analyzing how different species grow in various climate conditions.
This year, Koehler said they are continuing field trials started last year to examine the season long effects of seedlings that are infected and also added a component to study the impact on nutrient uptake.
Koehler said with adequate data collected over multiple years, she hopes they can develop protocols for predicting areas of a field that are likely to get infected, protocols for real-time analysis and eventually the capability to tell the presence of Pythium from soil sampling.
“I think there’s a situation where there’s a lot of yield left on the table,” she said. “This is one where there really do seem to be some opportunities to tweak management and get some of that yield back.”