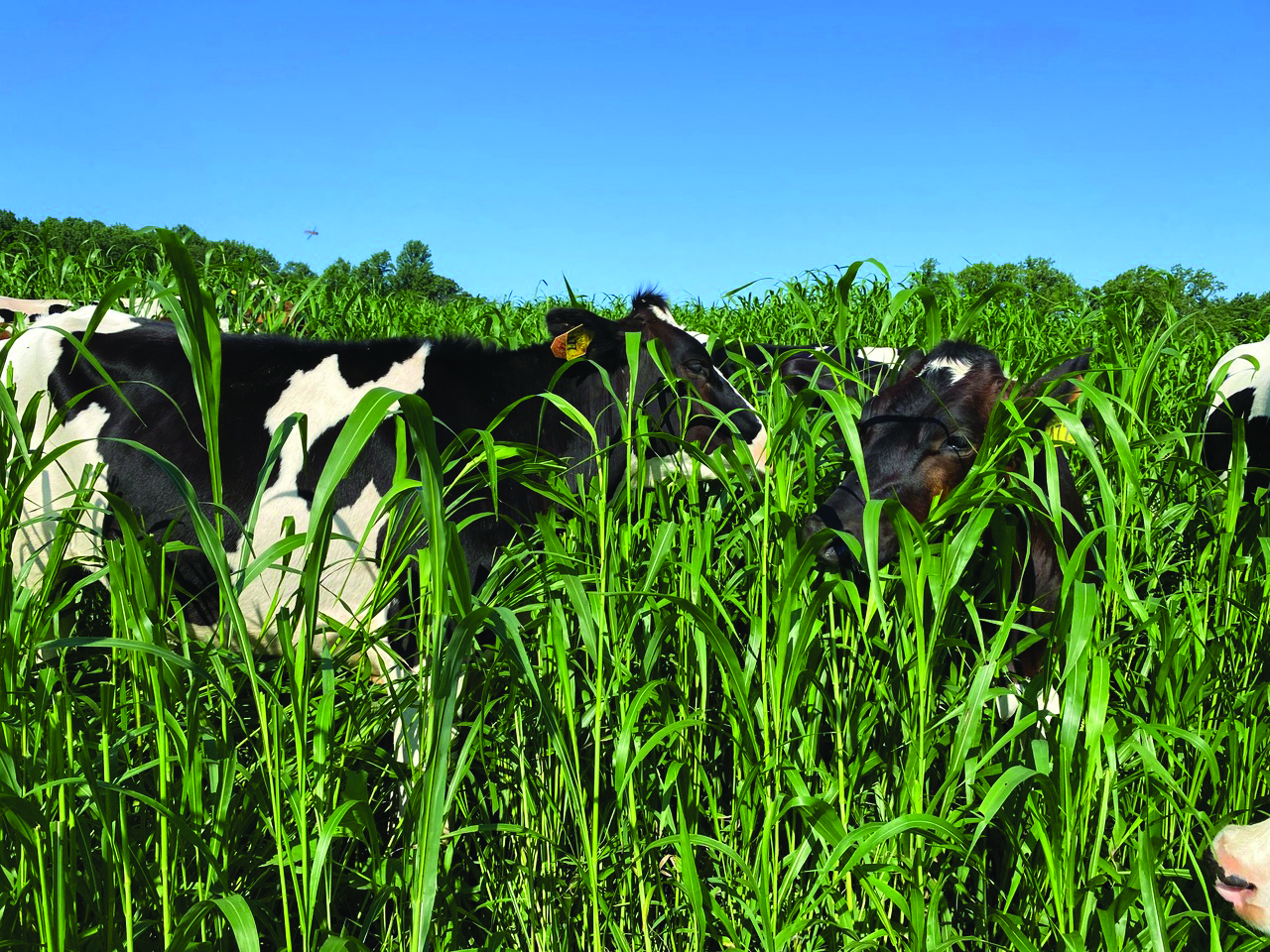 Dairy heifers in Clarksville, Md., graze in a field of sundangrass, part of a University of Maryland study into pasture management improvements, including annual forages. (Photo courtesy Sarah Potts)

After listening to producers in the dairy and beef communities, Amanda Grev and Sarah Potts said they decided to begin a study at the agriculture college’s Central Maryland Research & Education Center on pasture improvements, including annual forages. Many producers are using annuals to extend their grazing season earlier or later into the year.

“We thought it would be cool to do a feeding study to put some of these annuals to the test a little bit,” Grev said. “What we wanted to do was start putting in some annuals, start rotating some of these cows and see if we could use some of those kind of minor improvements in both management and forage utilization to help improve the growth or the gains of these heifers while they’re on pregnant and on pasture.”

In June, Grev and Potts split 25 pregnant heifers — between 40 and 180 days of gestation — into two groups on a 27-acre pasture covered in tall fescue grass. The pasture was split in half, and a control group was moved to an unimproved, continuous pasture system. A rotationally grazed group was moved onto a pasture fertilized following a soil test.

Sudangrass was also planted on about five of that pasture’s 15 total acres. The control group has unlimited access to its 12-acre pasture. The rotationally grazed group is fenced into rotating, 1-to-2-acre paddocks until all forage is exhausted, typically about every three days.

Between June 19 and July 29, those heifers grazed the fescue paddocks, and were moved to sudangrass paddocks to graze through Aug. 26. Grev and Potts expect to return the group to sudangrass around Sept. 5.

Aside from the differences in pasture, both groups are managed the same. They’re taking forage samples throughout the season and measuring animal weight and growth monthly. They’d like to continue the study into the winter, starting over with a new herd while using winter annual forage, Grev said.

Long term, she also would like to do a financial analysis on pasture improvements for producers. For now, both agents are looking forward to the data from this preliminary study.

“It would be really nice just to get some numbers to show producers in case they’re interested in some of these minor improvements,” Grev said. “Is it actually going to make a difference on their farm? Or should they just keep doing what they’re doing and have this big, open field and kind of let it be what it is? How much of a benefit is there? Because it’s a little bit of extra work.”