UMES enjoying fruits of its labors 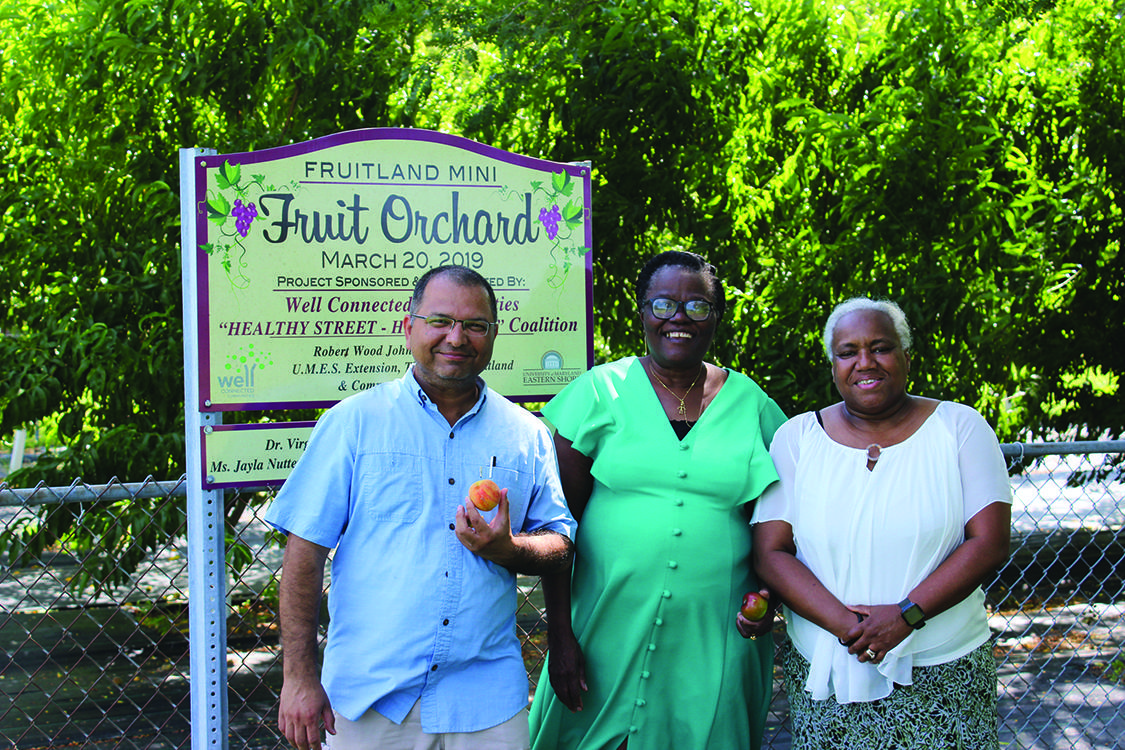 FRUITLAND, Md. — After two years of growth, fruit trees planted in a Wicomico County demonstration orchard are beginning to bear fruit, but the project has generated community engagement since the trees went in the ground.
The mini-orchard of 46 pear, plum, peach and apple trees is a project University of Maryland Eastern Shore and its chapter of the Well Connected Communities initiative aimed at community development through fruit production and education.
“It’s all about training people to be sustainable, teach them how to do it on their own,” said Virginie Zoumenou, director of the UMES Nutrition and Health Program.
The project grew out of a 10-year grant awarded to Well Connected Communities in 2017 from the Robert Wood Johnson Foundation to “initiate the culture of health” in the Lower Shore counties.
The grant brought about community health assessments for Fruitland, Pocomoke and Princess Anne/Eden and action plans were then developed in each municipality with community input.
Zoumenou said during the meetings, UMES Horticulture specialist Naveen Kumar Dixit presented history on the area that showed the Lower Shore was a large fruit growing area. In 1873, Fruitand’s name was changed from Forktown to reflect its agricultural surroundings at the time and by 1925, the Lower Shore counties were producing 6 million pounds of apples and 6.4 million pounds of peaches, along with more than 500 train cars of strawberries.
“So they said, ‘Ok, we want fruit back in our community,’” Dixit said. “People were ready to give us land … for free.”
The team selected a spot near the Fruitland Little League complex and the city paid for fencing around the 60-feet by 60-foot plot and provided a water tank for irrigation. A local garden center donated mulch and compost to get the orchard established a local fire company has brought water to the plot during the growing season. Students along with members from the area’s elderly population participated in getting the trees planted and for the past three years, a dedicated group of about 25 people representing multiple community groups and organizations have shouldered the responsibility of maintaining the orchard.
After the Fruitland orchard was started, other mini orchards were created in Stockton, Pocomoke, Eden and two in Princess Anne, totaling about 50 trees, but the organizers said Fruitland remains the flagship, both for its size and engagement.
“It’s a bunch of different groups coming together at different times to keep everything functioning and going,” said Linda Powell, administrative assistant for the City of Fruitland and part of Well Connected Communities.
“It’s because of her,” Dixit said, referring to Powell. “She really takes the lead on the project.”
Powell added this summer, a team of about six middle school students is handling the weeding and watering tasks.
“I hear good things, I get good responses,” Powell said of the community’s interest. “Hopefully, it’ll take off once they get more of the fruit growing.
Dixit said in a conservative estimate, the mini-orchard should produce about 5,400 pounds of fruit annually and if they get equipment set up to apply fertilizer and pesticide through its irrigation, “it could be a lot more.”
Dixit added he brings his Horticulture classes from UMES to the Fruitland orchard for pruning lessons.
“These trees are better than mine at the university,” he said with a laugh. “I’m jealous.”
With fruit harvest beginning this year, Zoumenou said they are incorporating education on preserving and storing the fruit for year-round availability.
Dixit said the he, Powell and Zoumenou each come the project with different motives but share the same goal.
Powell’s focus is sustainability: “If you can’t buy it, grow it,” she said.
Zoumenou said making healthy food more available in the community is her priority and Dixit’s attraction was in turning a little-used grass area into productive cropland.
But regardless, the community has to buy into the project and stay with it for it to succeed.
“It’s just amazing to see how the community can come out together,” Zoumenou said. “If the community is not engaged, you cannot go anywhere.”