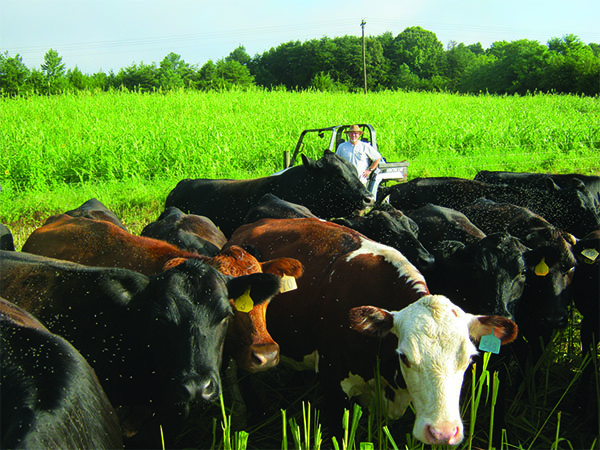 The Virginia Forage and Grassland Council named Tim Tobin its 2021 Outstanding Forage Producer of the Year during its virtual winter conference this month.
Tobin, a Caroline County farmer, was nominated by the Hanover-Caroline Soil and Water Conservation District for his accomplishments on his family’s Swallow Hill Farm.
“They made an early commitment to managed rotational grazing as a production tool,” Jim Tate, conservation specialist in the district, said in the nomination document. “They recognized that for forages to be productive they need rest and recuperation after grazing. They set up the entire production acreage to allow controlled grazing in a logical and workable fashion.”
This was done after Tobin developed a vision of what he wanted to produce and how he wanted to build his family farm business, the nomination said. He did this by consulting available resources including NRCS, the soil and water district, and VFGC as well as working farms.
Swallow Hill Farm, a 142-acre farm in Caroline County, has a little over 100 acres open and fenced for grazing.
The farm produces grass fed beef, lamb, raw honey, free range chicken, eggs, woodland raised pork and other fresh products.
“We are a family-owned and managed farm,” is the message Swallow Hill gives to potential customers on its website. “Customer satisfaction is very important to us. We produce the highest quality beef and lamb, which is USDA inspected, dry-aged (beef only), vacuum packed and well labeled. In addition to eating healthy food from a known source, you will be supporting local agriculture when buying grass fed beef or lamb from us.”
Tate reported in the nomination that Swallow Hill’s herd of about 25 brood cows graze its pastures. The 25 head of beef it produces each year grows up and is finished on the farm’s forages as well. The herds graze on separate pastures.
They also have 26 sheep and 26 goats. The goal is to have no more than 60 small ruminants.
“To do this they have developed an excellent grazing system and are constantly improving it to get better efficiency and production,” Tate reported.
When the Tobins acquired the property about half of it was in naturalized fescue which was hayed once or twice per year. This land was in fescue because it was too hilly for row cropping. The front fields had a long history of no-till cash grain rotation of corn, wheat and beans.
Tate explained that the original concept was to use a cycle or two to convert the crop land to permanent hay and pasture using novel endophyte fescue and orchardgrass and alfalfa and clover.
“The early cover crops were so successful and so productive that they are still a vital part of his production resources,” he continued. “He has worked with an industry seed supplier for quite a few years now and they have gotten quite adept at fine tuning mixtures that work for Tim’s soils and climate. When Tim orders his cover crop seed, he publishes a notice and invites any who are interested, to order with him and take advantage of lower shipping to share the freight bill and several folks do so every year.”
Tate said that the multi-species cover crops fill several voids in the production. The started with multi-species cover crops to convert the row crop land to permanent forage.
Currently about half of the former row crop land has been converted to permanent sod and about half is planted twice a year to both warm-season cover crops and cool season cover crops. The high-quality perennial forages include novel endophyte fescue and orchardgrass mixed with either alfalfa and ladino clover depending on the paddock.
“When the cow herd has access to the warm-season annuals they are not on the endophyte infected fescue and it allows stockpiling of the fescue for winter and mitigates fescue problems,” Tate wrote. “Both these high quality perennials and the summer annuals have proven to make excellent forages for finishing livestock prior to harvest!”
He stated that the warm season crops are unparalleled in productivity, saying they allow the stock to avoid the issue of summer slump and keep the livestock healthy and the young stock growing even through the heat of summer.
“In a good year the Tobin’s get two full grazing’s of the summer covers. The warm season covers can be grazed into the late fall allowing the stockpiling of cool season grasses for the winter months.”
When fall arrives, the cool season multi-species are ready to provide late grazing opportunities.
The Tobins have fenced their two ponds and the stream that runs through the farm to keep the animals out of the water. This is in keeping with their desire to protect their soil and water resources.
They worked through the Hanover-Caroline SWCD to install approximately 9,000 linear feet of fence to exclude all livestock from these water features. In doing so, they also installed an alternative watering system and designed it to maximize the efficiency of the grazing system.
Tate reported that the farm is roughly divided into five parallel paddocks with each paddock being divided in the middle by the farm lane in the front or the fence in the back side. This gives ten grazing paddocks and each area is then divided multiple times by the use of portable electric fencing. Livestock can be moved multiple times per day or given a multiple day area as needed. Every other fence line has a watering system with a frost-free water trough in each major section for winter water with quick connects and frost-free hydrants making portable trough use available every 300 feet.
This outstanding works to help others learn about the techniques he has developed through various activities and groups.