Va. dairy bounces back after bouts with wind, fire 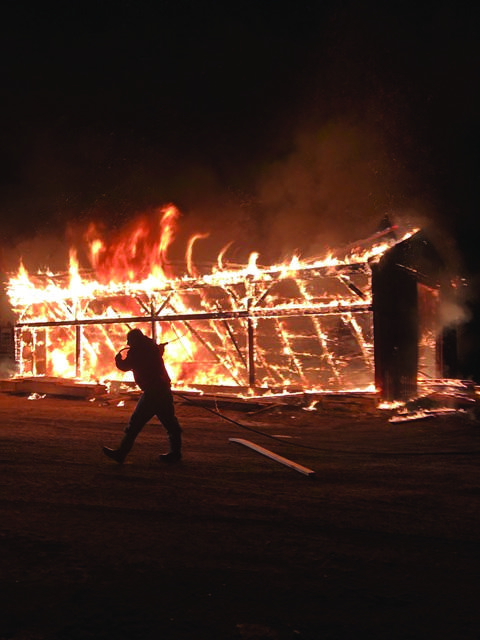 WILSONS, Va. — No, locusts have not taken over Richlands Dairy Farm.
But, unfortunately, the farm has been hit by fire and by wind damage — twice by wind damage — in the past five years. And back in 2004, a super cell wind storm also hit the farm.
And yet, the Jones family that runs this farm has preserved.
Richlands Dairy Farm includes about 800 acres. About 500 acres are owned by the Jones family and about 300 acres are leased from others; only about 500 acres overall are in active cultivation. Some of the land is used to grow corn.
About 200 dairy cows produce milk at this farm.
“In 2004, a wind storm blew down many of the trees here,” said T.R. Jones. He and his wife, Brittany Jones, manage the operations at the Richlands Dairy Farm. “We had to replace the roofs on three barns.”
In late May 2018, straight-line winds damaged the main barn for lactating cows.
In February 2020, wind again caused damage at the farm. This time, it was the at the main barn for calves.
And then on Dec. 14, fire struck the nursery calf barn at Richlands Dairy Farm. Only one cow died.
Family members faced these disasters with determination to rebuild and move forward.
“Every time we have had a disaster, it’s been right after we had made an investment in our farm,” said T.R. Jones.
In 1956, the family converted its farming operations from a focus on tobacco to dairy farming.
Today, the cows at this farm produce about 2,000 fluid gallons of milk each day.
On average, about 40% of the milk is bottled by the family. “We sell to a mix of retailers in the eastern half of Virginia,” said T.R. Jones.
Among the types of locations where their milk is sold are restaurants, grocery stores, gas stations, and coffee shops. Some of the milk is used to produce ice cream at the family’s creamery.
Much of the rest of the milk is processed through a cooperative.
Social media is an important part of the operations at Richlands Dairy Farm.
Both husband and wife are active on TikTok. They use the social media platform to highlight both educational aspects of farming as well as humorous activities of cows. One of their sites has about 1 million followers and another site has about 400,000.
For Brittany Jones, many of her videos focus on educating people on dairy farm operations; some of the videos also focus on fun activities at the farm.
For T.R. Jones, he uses TikTok to highlight his life as a dairyman and as a dad. “The videos are an extension of me,” he said. “With some, I use comedy. In other cases, I give my perspectives on life.”
One TikTok video produced by T.R. Jones shows him trying to teach a cow how to use a cow brush. This video has garnered more than 33 million views.
The family has also used TikTok to implement a novel way to engage the general public for a civic good. They have raised about $150,000 through that social media platform to purchase milk that is donated to help feed people truly in need.
“Using those funds, we’re been able to provide 30,000 fluid gallons of milk,” said T.R. Jones. “The milk has been given to a regional food bank in Richmond on a monthly basis since October of 2021.”
The family’s viral videos have also helped the family in their times of need.
As each disaster has hit the Richlands Dairy Farm, the Jones family has been thankful that people from local communities as well as from some distance have come to help them in their times of need.
“We’ve had people come from Pennsylvania, North Carolina, and Indiana to volunteer to help us,” said Brittany Jones. “Many heard of our needs through social media, especially TikTok. We are so appreciative of the overwhelming community support we have received.”
A few pieces of advice from T.R. and Brittany Jones regarding their experiences with disasters and how to cope with tragedies:
“Take one day at a time.”
“Don’t think about everything that needs to be solved.”
“Focus on one problem at a time. Then move on to the next problem.”
“Do the best you can with what you have.”
“It may be hard for a few days/weeks/months, but it won’t be like this forever.”