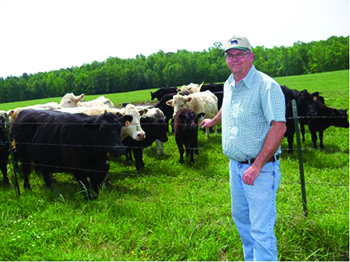 Mike Clark of Burkeville, Va., found a better way to market his cattle and the beef from them by harnessing his entrepreneurial gumption. (Photo by Rocky Womack)

BURKEVILLE, Va. — What would you do if you stumbled upon a more beneficial way to raise cattle and market the beef? Well, most cattlemen would jump right in, roll up their shirt sleeves and act immediately.
Mike Clark of Burkeville, Va., was a more cautious farmer. He preferred to take a balanced and planned approach.
That’s why when he heard of a better way to feed his livestock and sell the beef he didn’t fall all over himself to rush into this venture. He mulled over the idea in his head, working out a commonsense approach.
While visiting a farmer in another county several years ago, Clark heard him say that his newly born calf was already sold, without even hauling it away for sale.
Clark wondered how. The farmer told him that the calf’s buyer visited his farm and picked the animal out.
That was a much different scenario than what Clark experienced each time he marketed his cows and calves. Like many farmers, he hauled them to the stockyard and sold them at auction.
And “this guy was sitting at home,” he said, “and he had people coming to his house picking his cows out a year ahead of time. It just hit me like a ton of bricks.”
Back in those days, Clark was mostly feeding his cattle grain. The farmer he spoke with was grass feeding his totally, so Clark started grass-feeding some of his cattle while continuing to market the rest at the stockyard. The few cattle that he grass-fed were eventually butchered, and he and his wife, Cindy, ate the beef at home. They found they really liked the taste better than what they purchased at the supermarket.
But how could they eat all that meat themselves? They couldn’t, so they started storing it in freezers on the farm, offering it to a few customers and eventually more and more as the meat’s popularity grew. The Clarks and their son, Andrew, sold their grass-fed beef at farmer’s markets and some restaurants. After doing that for some time, Clark realized that he either needed more storage or find a better way to market. As a true ag entrepreneur, Clark knew the direction he wanted to go.
“It wasn’t long before we figured out that the demand for what we were doing dictated that we needed to put our whole operation in this program,” Clark said. He moved to increase his cow/calf herd of a Charolais and Angus crossbreed. The numbers grew to at least 400 head grazing on about 37 pastures and on 600 acres across four counties. Also, he added to his offerings cuts of pork from his butcher.
One day, a sustainable idea popped into his head when he spoke with another cattleman from North Carolina. This fellow told Clark that he could market his meat by placing small coolers with merchants who would accept the concept. That was exactly what he did. Over time, many Virginians could find Greenway Beef freezer boxes filled with cuts of meat at various merchants, or they could buy online.
Clark said customers bought grass-fed beef because it was locally grown, raised without antibiotics and free of added horomones, leaner, USDA approved, and a Virginia’s Finest brand. The Clarks worked hard to raise consistent-tasting beef.
One thing Clark learned quickly when marketing grass-fed beef was that he had better know the answers to customers’ questions and certainly know more than production practices.
“The challenges of this along the way are that being a farmer and knowing how to raise cows, knowing how to have cows butchered, learning the meat side of the business and learning how to sell things is way different than just being a farmer,” he said. “The learning curve for that is straight up because you will be asked questions you don’t know the answers to unless you’ve done your homework.”
Clark said one of the most valuable lessons that he learned began when he was first starting out. A car dealer of his told him the secret to marketing success.
“All you have to do is make it easy for people to buy things, and then you can sell things,” the dealer said. That conversation led to Clark supplying coolers and meat to Virginia merchants, making it easy for them to sell his cuts of beef. The rest of the story was a very successful and enjoyable lifestyle and career for Mike Clark and his family.