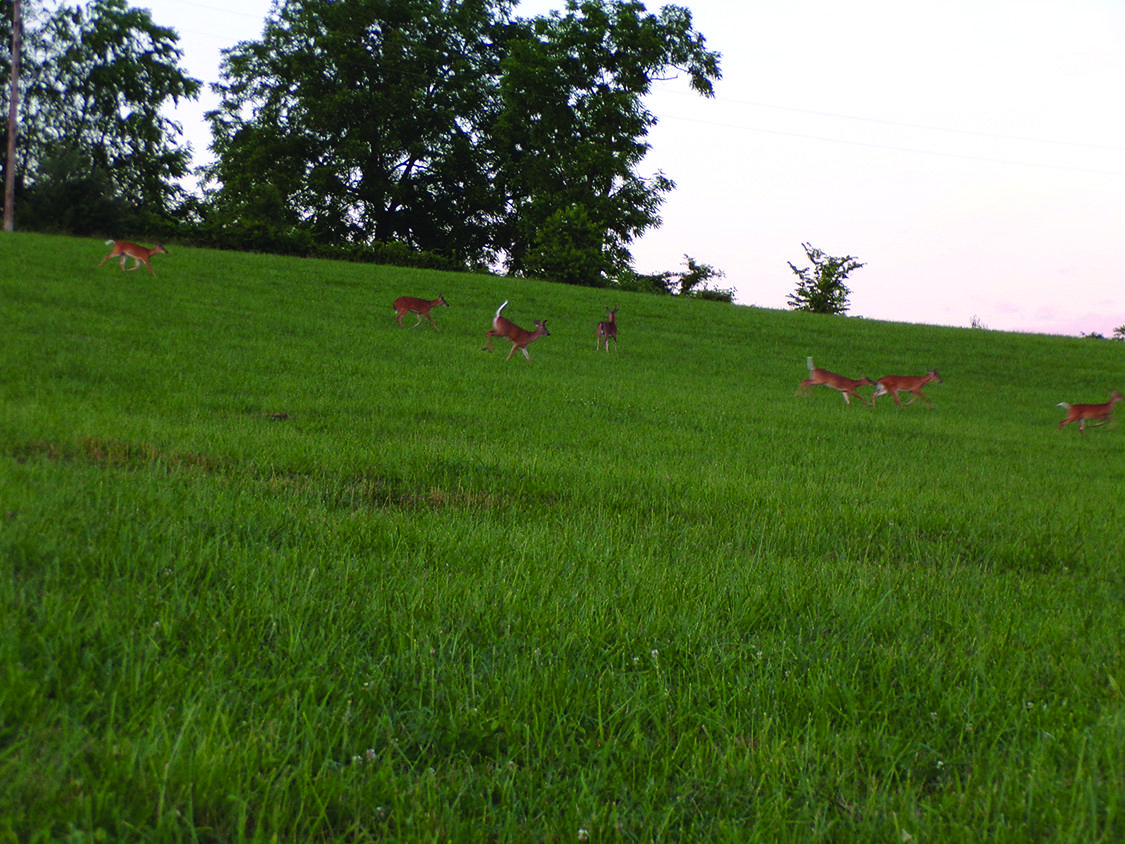 Whitetail deer pass through a hayfield in Pulaski County, Va. The Southwest Virginia county is one of three in a new disease management area monitoring for Chronic Wasting Disease. (Photo by Jane W. Graham)

Chronic Wasting Disease has been detected in whitetail deer herds in three widely separated parts of Virginia in recent years.
The Virginia Department of Wildlife Resources reported earlier this year that a confirmed case of the disease was found in a legally harvested deer in Montgomery County in 2020.
This incurable disease, found in deer, elk and moose in North America, is a slow-acting and progressive neurologic disease that ultimately results in death.
While discovery of the infection has led to imposition of restrictions on interactions of humans and deer, the disease does not appear to pose a threat to humans, livestock or pets.
Megan Kirchgessner, DWR wildlife veterinarian, said research has not found any strong evidence of susceptibility to the disease in livestock.
She said hogs in a lab experiment have been found to be susceptible to CWD but stressed that no hogs have been found to be infected through natural transmission.
This includes both domestic and feral hogs.
Kirchgessner said there is one step farmers can take to protect their animals from possible infections.
Dispose of deer carcasses and parts, especially those from infected animals, in a landfill. She cautioned against feeding animal parts to hogs.
The Center for Disease Control and Prevention recommends hunters test all deer harvested from known CWD-positive areas, wait until test results are received prior to consuming the meat, and do not consume any meat from animals that test positive for the disease. Regulations pertaining to CWD, maps of affected states, and information about CWD can be found on the DWR website at: www.dwr.virginia.gov/wildlife/disease/cwd.
The disease-causing agent is spread through the urine, feces, and saliva of infected animals. Clinical signs of CWD, which typically do not develop for several months to over a year after exposure, include staggering, abnormal posture, lowered head, drooling, confusion, and marked weight loss.
The Montgomery County deer was brought to a taxidermist in late November 2020 and DWR obtained the sample in January as part of the Department’s proactive statewide CWD surveillance effort, the agency reported.
“At the time of harvest, the hunter did not notice any outward signs of disease and the deer appeared to be in good condition,” a DWR news release stated. “At this point, there is no evidence of a linkage between this new occurrence and prior occurrences in the state; the deer was harvested more than 160 miles from the closest prior detection in Madison County. Because of the significant distance from the nearest CWD-positive deer, the DWR conducted an extensive forensic investigation to confirm the harvest location of this deer.”
Under DWR’s CWD Management Plan, a new disease management area, DMA3, has been created and includes Floyd, Montgomery, and Pulaski counties. Regulatory actions to control the spread of CWD which go into effect immediately include:
1. Prohibition on white-tailed deer fawn rehabilitation in DMA3, Restricted transport of whole deer carcasses and any parts containing brain or spinal cord tissue out of DMA3 (please see https://dwr.virginia.gov/wildlife/diseases/cwd/dma-3 for additional information on deer carcass transport restrictions).
2. Prohibition on feeding of deer year-round in Bland, Carroll, Craig, Floyd, Franklin, Giles, Montgomery, Patrick, Pulaski, Roanoke, and Wythe counties, and in the cities of Radford, Roanoke, and Salem.
The agency reports that it has been closely monitoring CWD prevalence and spread in northwestern Virginia (DMA1 and DMA2) for over ten years. Across the rest of the state, DWR has been conducting CWD surveillance for the past three years with the assistance of cooperating taxidermists. During the 2020 – 21 deer hunting season, cooperating taxidermists submitted samples from over 2,600 deer. The only CWD detection to result from this statewide effort was this Montgomery County deer.
CWD has been confirmed in twenty-six states and three Canadian provinces. In Virginia, a total of 109 deer have tested positive for CWD since 2009.