Va. Tech brews up new partnership with Hardywood to get Hokie beer 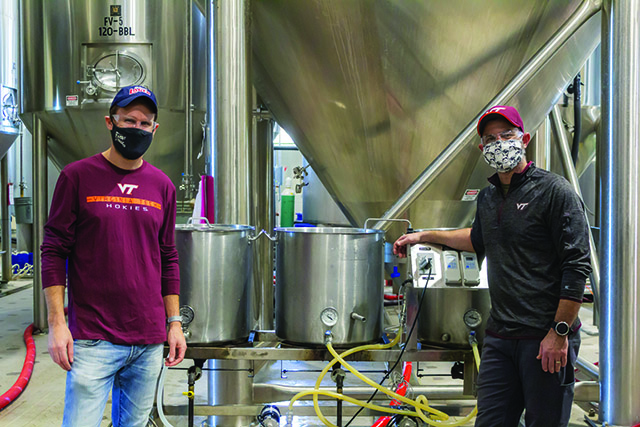 BLACKSBURG, Va. — Virginia Tech’s agricultural research has sparked a new partnership with Hardywood Park Craft Brewery in Richmond, Va., resulting in a licensed Virginia Tech beer — Fightin’ Hokies Lager to be marketed starting next spring.
The new brew is described as a classic Munich-style Helles lager at 5 percent alcohol by volume with balance between pleasant malt sweetness and herbal noble hop character.
Earlier in the year, Virginia Tech started the processes to identify a brewery that had strong brand recognition, a history of quality, a collaborative approach to research and development, a record of sustainability, and the ability to produce a high-quality product to bring to market and meet consumer demand. As a result, Virginia Tech received interest from several top brewing firms in the country. Ultimately, the university said, Hardywood’s reputation for quality beer and commitment to serving the commonwealth through implementing sustainable practices and sourcing ingredients locally made them an ideal partner.
Named Virginia Green Brewery of the Year in 2015, Hardywood was the first brewery in Virginia powered entirely by renewable energy, including solar, biomass, and wind through the Dominion Virginia Green Power Program. The Hardywood team works with local farms to reuse spent grain as compost and feed. Several of their beers are brewed in support of organizations dedicated to environmental awareness and protection.
Eric McKay, president and co-founder of Hardywood, said that while the creation of the lager is a meaningful step in the formation of this new partnership, Hardywood is looking forward to future work with Virginia Tech on value adding projects ranging from hosting student internships to exploring the further use of Virginia agricultural products in brewing.
Hardywood brews with Virginia-sourced hops, malted barley, wheat, blackberries, raspberries, blueberries, pumpkins, peaches, apples, honey, ginger, locally roasted coffee beans, herbs, and spices.
Virginia Tech’s own brewhouse and malting system are cornerstones of the Department of Food Science and Technology’s Innovation Collaboratory, a space where industry meets research. Scientists in the department have worked with household names, such as Dupont Teijin Films and Tyson Foods, on food safety, packaging, and product development in the pilot plant.
“Our department is big on hands-on learning,” said Brian Wiersema, the plant manager at the Human and Agricultural Biosciences Building 1, where the brewhouse is located. “We had the company pull out some of the automation, yet the system mimics a craft brewing system.”
In 2017, the department’s fermentation program was one of the first programs in North America to earn recognition from the Master Brewers Association of the Americas. The program is among 12 universities in the United States and Canada to meet or exceed guidelines and learning outcomes established by the MBAA in the first year of the formal recognition process.
“Our department has grown dramatically in the last 10 years with new facilities, new faculty, and new options for our degree program,” said Joseph Marcy, who was head of the Department of Food Science and Technology as the vision of the pilot plant and the brewhouse was executed.
Fightin Hokie Lager traces its roots to six years ago when Wiersema, Herbert Bruce, assistant professor of practice for undergraduate education and master brewer and Sean O’Keefe, professor of food science and technology, were making trips to Munich, Germany to work on the program’s brewing equipment and set up a student exchange collaboration. Through their work, and time spent at authentic German beer houses, Helles lagers similar to the resulting Virginia Tech brew began to stand out.
“We were inspired to bring both the beer style and friendship home to share with fellow Hokies,” Wiersema said.
Once back in the states, the Virginia Tech brewers began to research Helles history, production, and processes reflected in the ingredients and methods for the type of beer. They began to develop the beer recipe, testing batches at Virginia Tech’s brewhouse in Blacksburg, Va., using their own 10-gallon pilot brewing system, experimenting with different malts, grist bills, yeast strains, hop varieties, and fermentation processes to arrive at their target recipe, flavor, and aroma profile.
During the summer, with the target recipe determined and partnership with Hardywood solidified, the team began their collaborations with Hardywood Brewmaster Patrick Murtaugh and Head Brewer Brian Nelson. They began to produce more test batches at Hardywood, refining flavor and aroma profiles in preparation to scale up to commercial production.
“Collaborating with Hardywood’s vast brewing knowledge and understanding of scale-up requirements has been fun and rewarding,” said O’Keefe, who began his brewing career almost 40 years ago while studying at the Technical University of Nova Scotia, where he received a master’s in food science degree. “It is exciting to see decades of brewing experience come together and bring this beer to all of our fellow Hokies to enjoy.”