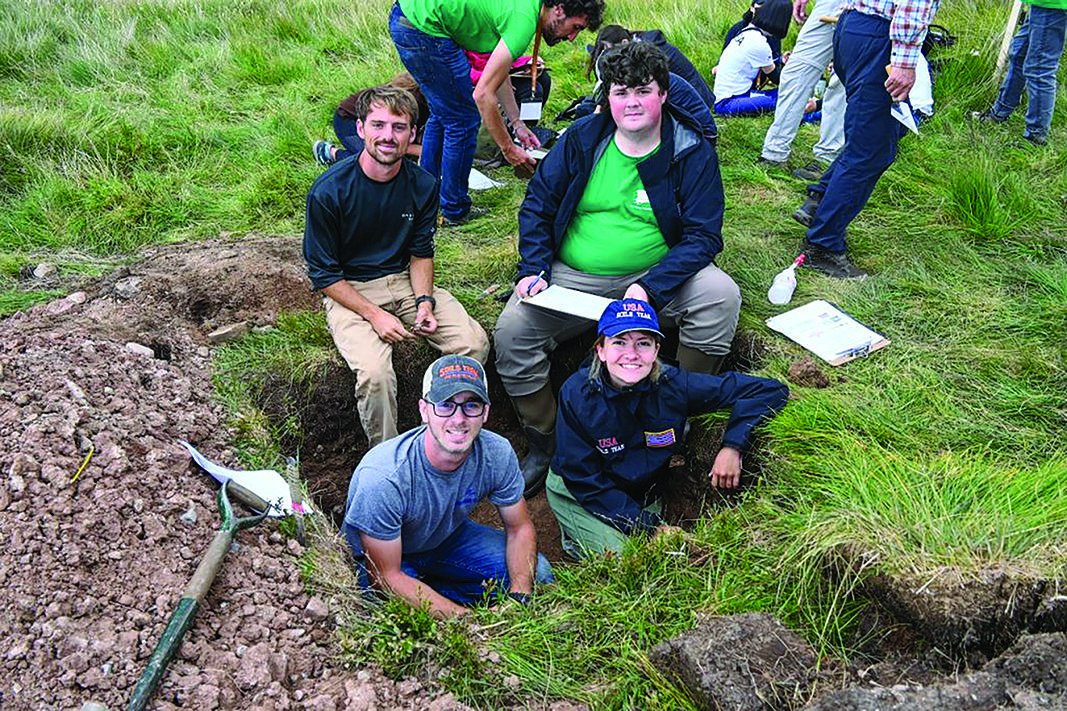 STIRLING, Scotland — Virginia Tech students and faculty of Team USA are international soil judging champions.
Nine countries participated in the fourth International Soil Judging Contest, sponsored by the International Union of Soil Science near Stirling, Scotland, on July 26-31.
The contest was made up of two soil pits for individuals, two pits for the group judging event, and an overall score. Team USA won first place in the overall score, followed by Australia, Spain, South Korea, and Italy. Other teams competing were Hungary, United Kingdom, Mexico, and Germany.
The U.S. team also won the group judging event, followed by Italy, Australia, Spain and Korea. In the individual competition, Clare Tallamy, a Virginia Tech senior from Leesburg, Va., won first, followed by Edwardo Vasquez-Garcia of Spain; Ben Atkins of Victoria, Va; Isaac Nollen of the University of Wisconsin-Platteville; and Woosek Jang of South Korea. Also competing on the U.S. team were Curtis Murphy of North Carolina State University, who placed sixth, and Kennadi Griffis of the University of Nebraska-Lincoln, who placed 12th.
“I could not have been prouder of the entire USA team. They practiced hard and learned quickly and worked well together as a team. Each one was our most valuable player,” said U.S. coach John Galbraith, also a professor in Virginia Tech’s School of Plant and Environmental Sciences.
The contest is designed to promote soil science by using a set of lectures and field trips to educate students and young professionals in field description, classification, and interpretation of soil profiles. A full day of practice was then followed by a full day of contest soils to reinforce the learning experience.
A wide variety of soils were shown by local experts to explain the local geology, soil variety, and soil genesis.
“The contest was an excellent opportunity for the students to meet other young soil scientists from around the world, to learn about the soils of south-central Scotland, and to travel internationally for the first time,” Galbraith said. “This event created new friendships and relationships that will last well into the future. Everyone who competed in this contest is a winner.”
The coaches of the top two overall teams were both from Virginia Tech. Jaclyn Fiola, a doctoral candidate studying vineyard soils, entered the contest as a co-coach of the U.S. team, but after arriving was asked to step in to coach the Australian team, who did not have a coach.
Tallamy came as an alternate for the USA team but was asked to compete as the fourth member of Team Australia.
“What Jaclyn accomplished was truly an amazing accomplishment. She responded to the challenge, literally introduced herself and Clare to the team, and coached team Australia to near championship level in three days of time,” Galbraith said.
“This contest and conference were experiences I am beyond grateful to have had,” Tallamy said. “While we did get to see amazing soils that we don’t have in our region of the U.S., I thought that the interactions we had with other young soil scientists were even more impactful. Getting to share ideas, languages, and conversations was a highlight of my time in Scotland.”
The international contest, held once every four years, was established to encourage the wider adoption of the discipline of soil judging around the world, to give motivated students an opportunity to assess soil in a different part of the world, to give students an opportunity to develop networks in the soil science community, and to demonstrate the career opportunities that soil science offers.
“Soil judging is the best preparation students can get for a career in soil science. The skills they learn and practice will be invaluable throughout their careers, as well as the connections with soil scientists from all over the world,” Fiola said.
The next contest will be in conjunction with the 23rd World Congress of Soil Science in Nanjing, China, in 2026.