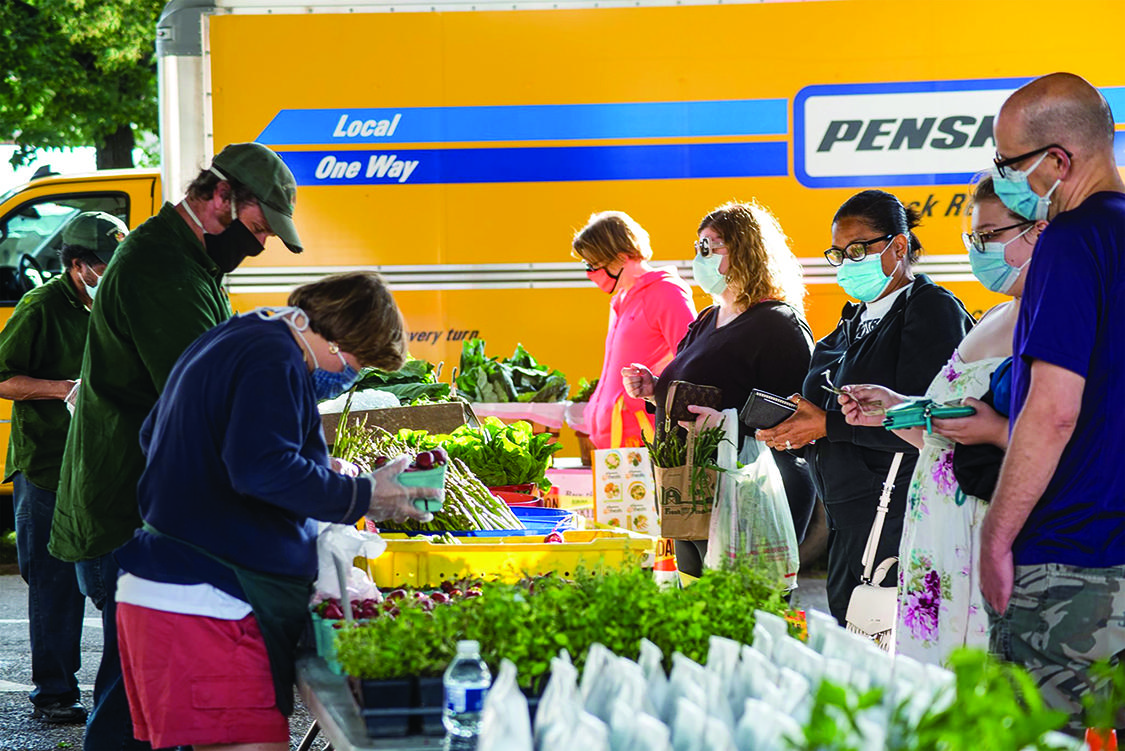 Before the pandemic, David Driever never gave the notion of home delivery a second thought. It wasn’t part of Windswept Farms’s business model and it never would be.

When the COVID-19 pandemic arrived early that year, confining people to their homes and emptying grocery store shelves, demand for Driever’s meat products skyrocketed. Many of his regular customers, won over by items such as his award-winning bacon, were courted at regional farmers markets. Now he’s delivering directly to their homes.

“It was not in my plan, but it’s working out, and I’m not opposed to it,” the Westminster, Md., farmer said. “It breaks up a little bit of the monotony.”

He’s not alone among farmers in the region. Although Driever said most of his business continues to be done at farmers markets, some markets in Maryland saw farm vendors who didn’t return last year after they established closer relationships with their customers, said Amy Crone, the Maryland Agricultural Commission’s direct-farm market representative.

“A lot of farmers are really reevaluating the value of a farmers’ market as a sales outlet for them,” she said. “Even as few as five years ago, farmers would say the majority of my sales happen at farmers’ markets. Today, with the new online tools that are available… I think that calculus has changed a little bit.”

When the pandemic arrived, it upended the business of many local farmers, who, in addition to serving individual customers, were selling to restaurants and other bulk buyers which all closed immediately. The change for many farmers demanded an about-face, and many found themselves doing things they swore they never would, such as launching websites and beginning delivery services. Beckie Gurley, owner of Calvert’s Gift Farm in Sparks Glencoe, Md., said she quickly began changing what she planted in the fields to favor home-bound customers. Kale, for instance, would no longer be sold by the case.

But the biggest shift occurred with her second business, Chesapeake Farm to Table, an online aggregator of Baltimore-area farms that serviced primarily restaurants before the pandemic. That flipped, practically overnight, requiring the business to hire new employees — drivers mostly — and buy new software and other items, as the orders poured in.

“The small farmer proved that we’re an integral, important part of the food system,” she said. “We could turn on a dime.”

Before the pandemic, Driever said about 95% of his products were sold at farmers markets, such as the Baltimore Farmers’ Market & Bazaar, the state’s largest, where he said he is its primary meat vendor. Post-pandemic, he estimated his market business to be 80 to 85%. The pandemic bankrupted one of his regular markets in Pennsylvania.

As the pandemic eased for the first time in the spring of 2020, farmers’ markets — declared essential by Maryland Gov. Larry Hogan — reopened in many cases with fewer vendors and customers. The Baltimore market, which typically had about 140 vendors, opened with just 20.

“In Baltimore, there’s people scared to death (of the virus) still today,” he said.

Hulsey worked with other market supporters to push Hogan to declare markets essential so they could open. In the beginning, however, local jurisdictions were holding farmers’ markets to stricter standards than grocery stores despite the fact that viral transmission is less likely outdoors. Locals in some cases even called the police on farmers’ markets for staying open, she said. And when the markets reopened, some of them, such as Baltimore’s, only invited critical vendors such as meat and produce farmers.

“The city (of Baltimore) required them to have all kinds of extra precautions,” Hulsey said. “They were super, super overkill about the rules, and because of that, people stopped shopping there.”

But since that period, most farmers’ markets have rebounded, she said. In 2019, money from her program was usable at 36 markets in the state. That fell to 16 in 2020, and now it’s at 46 locations, including several farm stands.

But she agreed that some farmers may rely less on farmers’ markets now, post-pandemic, than they did in the past.

“I think there is something to be said there about direct-to-consumer sales being more strong,” she said.

Still, Gurley said her experience with the markets in 2021 was refreshing. There appears to be a resurgence of interest from customers after farmers’ market performance, for her, began to dwindle around 2017, principally, she believes, because so many markets were opening.

Sales for Calvert’s Gift Farm were up this year at the markets she attends in Towson, Bel Air and Takoma Park. It’s all part of the farm’s “three-legged approach” which is stronger now than it’s ever been — sales directly to the consumer, including deliveries, farmers’ markets, and restaurants, which are served through Chesapeake Farm to Table, she said.

The night before he spoke with a reporter, Driever had made three deliveries. He requires a $50 minimum order, and he waits until he has multiple orders in a region before he delivers. That can take up to a week, he said.