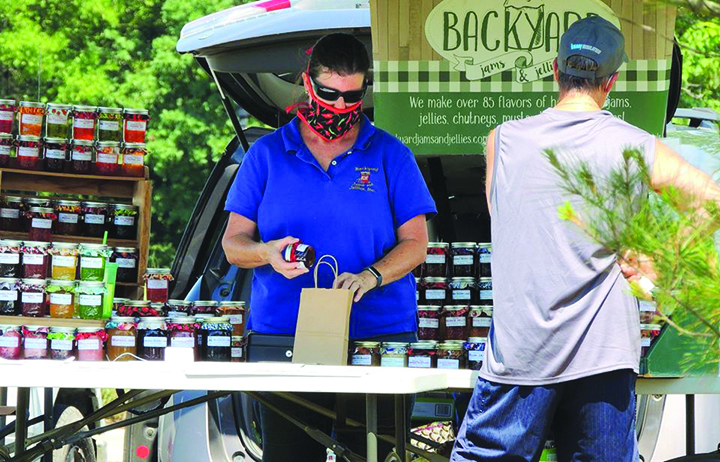 Krista Scudlark, owner of Backyard Jams and Jellies, in Milton, Del., said she was surprised when the Milton Farmers’ Market announced it was closing the market for the season on June 26 after struggling to turn a profit due to state-mandated social distancing and capacity restrictions. (Photo courtesy Milton Farmers’ Market)

MILTON, Del. — Milton Farmers’ Market closed for the season last week after announcing it has struggled over the last month to turn a profit due to social distancing and capacity measures demanded by the state in the wake of the coronavirus.

Several market vendors said they were surprised by the announcement, with some questioning why the market was closing when other regional markets, in their opinion, are doing well.

“Could it be better if we could ease up on some of the restrictions? Sure,” she said. “I think it’s just very sad for the vendors to not have had any type of input on them closing the market.”

To be profitable, Milton Farmers’ Market, which is typically open on Friday afternoons from 3 p.m. to 6 p.m. until mid-October, depends on live music, prepared food for on-site dining, and space for “friendly mingling,” the market said in a June 22 statement posted to its website. All of that was compromised by state protocols established in mid-May restricting capacity and banning social gatherings, including entertainment, at farmers’ markets, said James Fisher, market spokesperson. Live music has been one of the market’s most popular features for several years.

“I think we now know it’s a much bigger draw than we thought it was,” Fisher said. “We wish we could have made it work for the whole season for (farmers). … It’s not what we wanted, but it’s the right decision for the long-term viability of the farmers’ market.”

Krista Scudlark, owner of Backyard Jams and Jellies in Milton, said her sales dropped significantly two weeks ago, she believes, because the market struggled with the restrictions when it opened for the season on May 22. Only two people per vendor were permitted to shop at any given time, and a massive line developed, Scudlark said.

“My daughter waited in line for 55 minutes to get in,” Scudlark said. “I think a lot of people just didn’t come after that because they thought it was going to be like that every week.”

While she’s tired of the state’s restrictions, she said it’s not entirely clear to her why Milton’s market had to close.

“It’s definitely disappointing,” Scudlark said. “All the other markets seem to be making a go of it.”

Bruce Pape, owner of Deep Grass Nursery in Greenwood, Del., blames the state. He said he made just $96 on opening day despite averaging between $1,000 and $2,000 per weekend at other nearby markets.

“The way the governor has set the restrictions is totally ludicrous, and it’s highly prejudicial,” he said. The state is “only interested in agriculture as long as it’s corn, wheat, soybeans or chicken. They could care less about anyone else.”

To make up for the lost market, Pape said he plans to sell more to customers from his nursery and through the wholesale and local auction markets.

Farmers’ markets across the state, however, are doing well, and Milton’s closure seems linked to its emphasis on entertainment, said Stacey Hofmann, spokesperson for the Delaware Department of Agriculture.

“When you look at all the other markets, they’re having tons of people coming out, and their sales are actually up,” she said.

On June 15, days before the market announced its closure, the state moved into its second phase of economic reopening, which loosened some restrictions on farmers’ markets. In its forthcoming third phase, still under discussion, restrictions will relax further, possibly permitting entertainment, she said.

But by closing, the market will save money on equipment rentals and marketing costs, Fisher said.

“We’re preserving our ability to come back next year when we hope the conditions surrounding COVID-19 will be quite different,” he said.

Brady said she hopes her customers find her at other local markets, and she disagrees Milton Farmers’ Market’s reasoning.

“They want it to be a party. A farmers’ market is supposed to be a place where people come and buy fresh produce from a local farmer,” Brady said. “I was doing very well there, and I’m just very grateful that I have (markets at) Lewes, Nassau Valley and Rehoboth.”