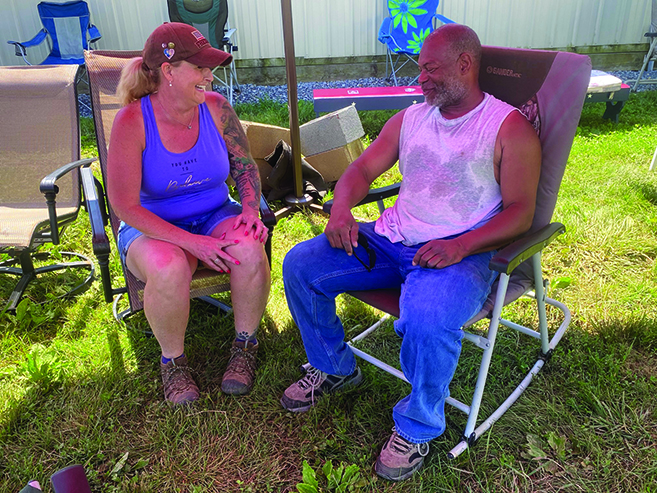 Lois Fritz, founder and director of New Freedom Farm, takes time out from clean-up activities at the farm to talk with one of the veterans the farm serves, Wade Minnis III of Buchanan. (Photo by Ashley L. Graham)

BUCHANAN, Va. — “Talk to Andrew,” Lois Fritz, founder and director of New Freedom Farm, said when someone asked her to recount the June 17 flash flood at her home. “He’s the man who swam to save my horses.”
She was referring to Andrew Kintgen, veteran mentor and barn manager.
Kintgen said on the day of the flood, he was at the farm working with the farrier trimming the horses’ feet and then went into the Veterans’ Center and took part in a conference call. After that, he went outside and saw rushing water of Looney Creek flooding the flat creekside farm.
He went into action, heading toward the animals endangered by the rising water and calling 911 for help. He reached the small animals first and opened gates so they could make their way to safety. There were three miniature horses and three miniature donkeys.
Next he went to rescue the farm’s two other horses, a Tennessee walking horse named Eli and a thoroughbred named Maybelline. By then, he reported, the water had risen to his stomach.
“I was treading water,” he said. “I got a halter on Eli. He gave an extra assist and the Thoroughbred followed.”
New Freedom Farm is known nationally as a safe place for military veterans dealing with effects of combat. The non-profit community farm exists to help veterans with Post Traumatic Stress Disorder, substance abuse and traumatic brain injury. Interacting with the equines, farming and peer-to-peer support are tools in the process.
“The end goal is to personally empower veterans and help them heal through the realization of their own efforts and contributions,” the farm’s webpage states. “New Freedom Farm’s mission is ‘healing heroes through horses.’ Oftentimes, veterans develop deep friendships through equine activity and gentling, fostering physical, emotional and spiritual health, which helps with reintegration into civilian life.”
Fritz estimated the flood had done about $10,000 damage, but no people or animals were injured.
As the water receded, a huge volunteer community effort swelled to get the farm in shape able to reopen on June 23. Fritz said she had help immediately and volunteers ranged in age from five to 81.
Volunteers had come in the days following the flood and on Saturday, June 20 more than 30 volunteers from the local community and across the Mid-Atlantic worked with military precision to restore the healing place for veterans and endangered equines.
Busy people working at assigned tasks gave directions to where Andrew Kintgen, veteran mentor and barn manager, was overseeing volunteers re-packing hay in a building reached by the flood.
With clipboard and cell phone in hand, Fritz on June 20 directed her diverse group of helpers, delegating responsibilities.
Hunter Allen Wilson, an enthusiastic 11-year-old from Bedford, Va. had come with his dad on June 20 and said he had been doing all kinds of things that morning.
“I’ve shoveled a lot of manure,” he added with a laugh.
Scott Booher, of Buchanan, came with members of Botetourt Citizens Defense Force, a group made up of military, law enforcement members, veterans and Buchanan community members. Booher said the group had planned a range training event for Saturday but decided to come to New Freedom Farm after hearing about the flood.
Bill Price, a veteran and commander of Veterans of Foreign Wars Post #5895 in Buchanan, volunteers often at the farm with his family and said he and his wife and two sons, ages eight and 10 came to help with the clean-up.
Brenda Einhorn from Laurel Springs N.J., said Fritz called her Wednesday to tell of the flood. By 3.a.m. Thursday she and her husband, a veteran, were on the road, bound for New Freedom to help restore the farm.
Rhonda Deal and her veteran husband drove from Statesville, N.C. to help.
Both Einhorn and Deal families are part of Rolling Thunder, a national non-profit organization that focuses on Prisoners of War and Missing in Action issues.
They had high praise for the work Fritz, a veteran and nurse, is doing for the veterans on her farm. It had begun as a horse rescue project.
Deal pointed out that Fritz’s farm works to decrease suicides among veterans and military members.
Fritz and the farm, which operates as a 501-C3 non-profit, is tied closely to Rolling Thunder, Einhorn and Deal added. All 92 chapters across the United States support the farm, the women continued, noting three chapters credit Fritz with saving the life of a member.
“Once she put out the word, friends and different organizations flooded the farm to get it back from the flood,” Einhorn said.
The farm had been closed because of the COVID-19 pandemic. It was headed toward re-opening June 16 but the re-opening to be postponed to June 23.
Deal said several veterans have called inquiring about the farm’s opening expressed their need for the therapy the farm offers and that they would be there when it opened.
Fritz said she is planning to host an Aug. 22 open house at the farm for the national group if circumstances permit. Veterans across the nation use the 22nd of every month to call one another in the effort of suicide prevention.