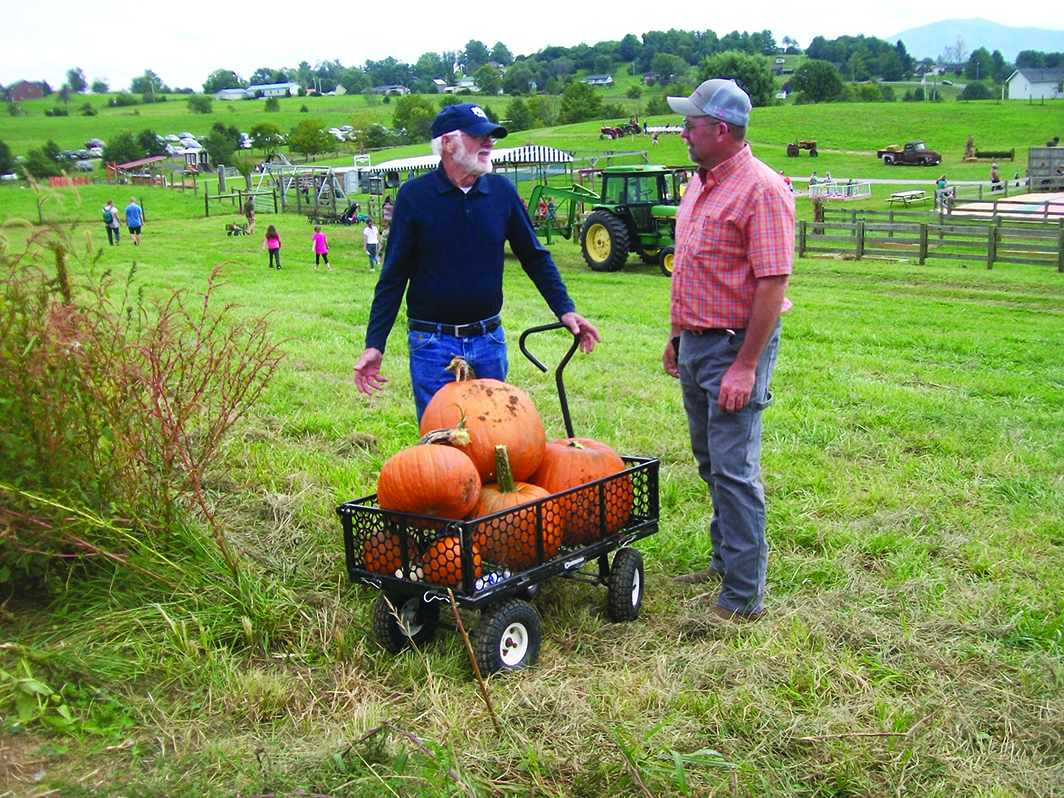 Danny Jarrells of Pulaski, Va. stopped on his way out of the Thornspring Pastures pumpkin patch with a load of pumpkins for his family to talk with owner Mike Jones. Jarrells said he was visiting with his wife, daughter, granddaughter and infant great granddaughter. (Photo by Jane W. Graham)

Fresh air and innovation are calling to Virginians this fall as the restrictions of the COVID-19 era create longing to be outside.
Agritourism farms have spread their activities out from late September to Halloween, offering multiple opportunities to visit their attractions.
Mike Jones, walking through his Thornspring Pastures’ Fall Festival, estimated that his attractions are spread out over 6 acres.
These include a miniature railroad made of barrel carts, a jumping pillow, a giant slingshot, gem mining and a whole lot more.
These are in addition a choose-your-own pumpkin patch, a corn maze and a wagon ride around the cropland.
Children playing on the jumping pillow were a clear example of how the world has changed since March.
On their own, they were keeping 6 feet apart.
To them, social distancing had become normal.
Darren Gilreath at Joe’s Trees in Craig County said the biggest change in this year’s fall events is having the farm open during the week.
This allows customers to spread out through the week thus keeping the pumpkin patch and corn maze from being packed with people.
“More people are coming in the week,” he said. “People who are more vulnerable to the virus.”
Joe’s Trees, a family-owned business for several generations, was founded in 1962 as a Christmas tree farm. The choose-and-cut tree operation remains the primary activity even though it has grown into pumpkins and entertainment.
The family has planted a huge number of Christmas trees in that time and these trees contribute to the air quality now being enjoyed by visitors seeking fresh air, he said.
He said he plants 1,000 trees annually.
Gilreath calls the trees “nature’s filters” as they are continuously cleaning the air.
“We plant thousands of trees and they clean the air for thousands of people,” he said.
Tyler Hawes at Madison Farm in Montgomery County is experiencing something different in his pumpkin patch. He said his pumpkins are slower in ripening this year and production is off from other years and not yet been able to pinpoint the cause.
Montgomery County is home to one of Virginia’s oldest pumpkin festivals, Sinkland Farm in Riner where the Sink family is celebrating its 29th festival.
Due to the large crowds the festival typically draws annually, owner Susan Sink said they have instituted rules about how many people can be on the farm or in the barn at one time.
The farm’s website lists a maximum of 1,000 people for the farm and 50 for the barn.
She said the opening weekend in late September was a good one for the ongoing festival. It continues on Saturdays and Sundays as well as evenings on Thursdays and Fridays.
The newcomer to the fall festivals in Montgomery County is truharvest farms which began as one of the state’s largest industrial hemp producers and have diversified into produce and pumpkins and sunflowers.
Kelli Scott, spokeswoman for the company, said the farm is offering pick-your-own pumpkin events until Oct. 31 and has held sunflower events the last two weekends.
One thing that appears not to have changed for agritourism businesses.
It is a lot of hard work.
It may have gotten more difficult because of the restrictions, though no one said it was not worth the effort.