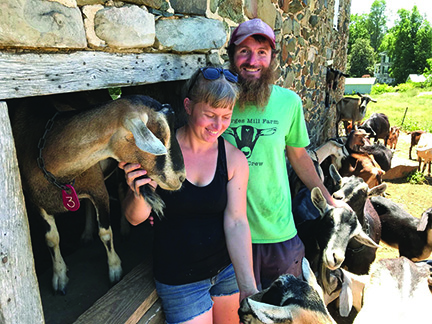 Molly Kroiz and her husband, Sam, co-own Georges Mill Farm in Lovettsville, Va. The dairy farmers are part of the Virginia Cheese Guild, whose farmers agreed last week to donate a portion of their sales to black farmers and anti-racist causes. (Photo by Jonathan Cribbs)

As a dairy farmer, Kat Feete said she understands what it’s like to be stuck in a system ambivalent to her needs. She’s dealt with insensitive milk co-ops. She’s labored under regulations built to both constrain and favor farms much larger than her operation of 130 dairy cattle in southwest Virginia.

But when the country erupted in protest in late May following the killing of George Floyd, she considered what it must be like to face those problems with the added challenge of being a farmer of color.

“We see what’s going on out there, and it’s a pretty easy situation to sympathize with, especially if you’re a farmer, because you’re being crushed by this systematic, institutional indifference,” said Feete, general manager of Meadow Creek Dairy in Galax.

Feete’s one of several cheese makers and cheesemongers in the Virginia Cheese Guild who agreed last week to donate a portion of their sales between July 12 and July 18 to black farmers or anti-racist organizations. Guild members said they decided to make those pledges after Bakers Against Racism, a worldwide, 5-day, virtual bake sale, raised nearly $2 million to support the same causes.

Meadow Creek Dairy pledged to donate 20% of revenue generated from sales of its new Extra-Aged Appalachian cheese. As of July 16, the farm had sold nearly 100 pounds at $25 per pound. Their donation was pledged to F.A.R.M.S., a Charlotte, N.C., nonprofit dedicated to preserving farmland ownership in rural, low-income communities.

“It felt obvious. It’s really important to do,” Feete said. “I’m glad we were able to do something.”

F.A.R.M.S. has seen a boost in donations since protests began in large cities and small towns across the country, said Jillian Hishaw, founder and director of the nonprofit.

“It’s astonishing,” she said. “It’s just something I’ve been praying for. It’s kind of crazy it took a pandemic and Mr. Floyd’s death along with many others through the decades to ignite the donations. At times, I’ve been begging the past seven-plus years, and now that it’s coming it’s like when it rains it pours.”

Molly Kroiz, another donator and cheese maker in Loudoun County, said she felt isolated on her farm about an hour outside of Washington and the city’s many protest marches over the last two months.

“I feel like a lot of us have been feeling like we want to be part of the movement for change that’s happening right now, but most of us are sort of stuck on our farms,” Kroiz said. “The pandemic’s not helping, but dairy farms are not known for their ample amounts of time off.”

Her operation, Georges Mill Farm in Lovettsville, also had a better-than-average year so far due to a boost in sales after COVID-19 spread across the region. She agreed to donate a quarter of her sales over the last week, including some to the Southeast African American Farms Organic Network, which supports black farmers across the South.

“A lot of us are sort of blissfully unaware because it’s not our problem,” Kroiz said. “But I think there’s been an uptick in conversation in the last few months because of the Black Lives Matter movement and because everybody’s stuck at home talking to each other and seeing a lot of stuff online that maybe we wouldn’t have had time for before.”

Meadow Creek Dairy has long been interested in promoting diversity in agriculture, Feete said, primarily because her region is so rural and isolated.

“People don’t come here. There’s no money here,” she said. “Why would they?”

For years, she said, the farm has had internships for foreign students through a federal visa program. Meadow Creek has had students from Malawi, Haiti, Thailand and Central and South America. The Trump administration suspended the program this month, however, saying foreign workers are a threat to employment opportunities for Americans.

“It’s very easy in these areas to wall yourself off, and this has been a great reminder that we can’t do that,” she said.