Wagner gets grounded with bees 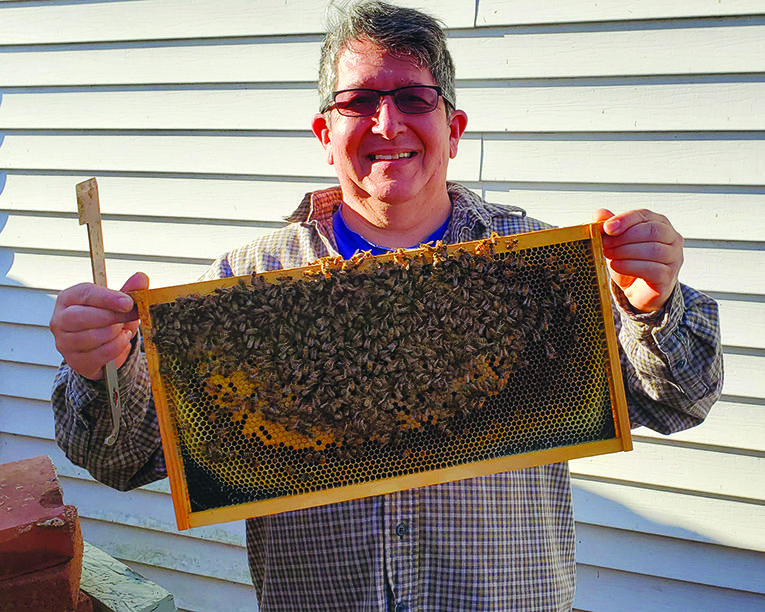 RAHWAY — Brett Wagner said he knew the time had come
“Four years ago,” he recalled, “I was working for a company, and I was 120 feet up in the air, and I’m looking around and I said, ‘You know what? I think I’m going to quit.’
“And I called my wife and I said I’m going to quit.
“She said, ‘OK, what are you going to do?”
“I said, ‘I’m going to raise bees.”
His prior job had taken him all over the world since his 20s, and many times he was away from home nine months out of the year. As he approached age 50, it was wearing him down, but most importantly he was tired of it taking him so often away from his wife and their two dogs.
Decision made.
Now 53 (he’ll be 54 in May), he has been raising bees for more than 10 years, and his Pointer Bee Farm has been in business for almost four years.
Courtesy of the website, Pointer Bee Farm’s line is a mix of New World Carniolan, Buckfast, Caucasian, Purdue Mite Biter, and the Fat Bee Man’s stock bees. Pointer Bee Farm stocks up every year to keep up with genetic diversity.
He is committed to the well-being of pollinators, and he encourages pollinator-attracting gardens.
He also wants bee hives every three miles. “We’re still trying to do that as much as possible,” he says. “If, basically, there was a hive every three miles, there’d be a lot of pollinating going on in New Jersey. You know, even your cucumbers in your backyard; all these things mean pollination. If it’s from bees, if it’s from insects, if it’s from butterflies. So that’s another reason to plant gardens.” He mentions that, in 2020, the Monarch butterfly was down 30 percent in the area. “As farmer, as livestock producers, these are things we worry about.”
“We want to keep our bees alive, we want to sell bees and honey, and we want people to enjoy it.”
“(It’s) very important,” he says of the diversity aspect. “Every year to every two years, I bring in new stock from different areas of the world. I work with other beekeepers, from Washington, California, Georgia, Florida, New Hampshire, Ohio, and from Hawaii I think I got a couple of queens.”
In the state of New Jersey, according to Wagner, you’re only allowed three hives for every quarter acre. Pointer Bee Farm itself is a little bit over a quarter acre, so Wagner has to have a lot of “out yards” (other people’s properties).
Therefore, he has apiaries beyond his home. 200 to 300 pounds of honey per year are also produced at Pointer Bee Farm (which, by the way, is named after his set of Pointer dogs), which has hives set up on Wagner’s Union County property, more at a Hunterdon County farm, and others stationed at various locations around the Garden State. Most of Pointer Bee Farm’s hives are five frame nucleus hives.
Eighty percent of those who buy bees from Wagner are backyard beekeepers who want to produce their own honey.
“We do have a couple of guys that do the cranberries and the blueberries on the East Coast here,” he says. “So, they have to restock their bees every year, so they buy a whole bunch. But most of them are backyard beekeepers, and normally after the first year they’ll call me back and say, ‘I need two more hives.’”